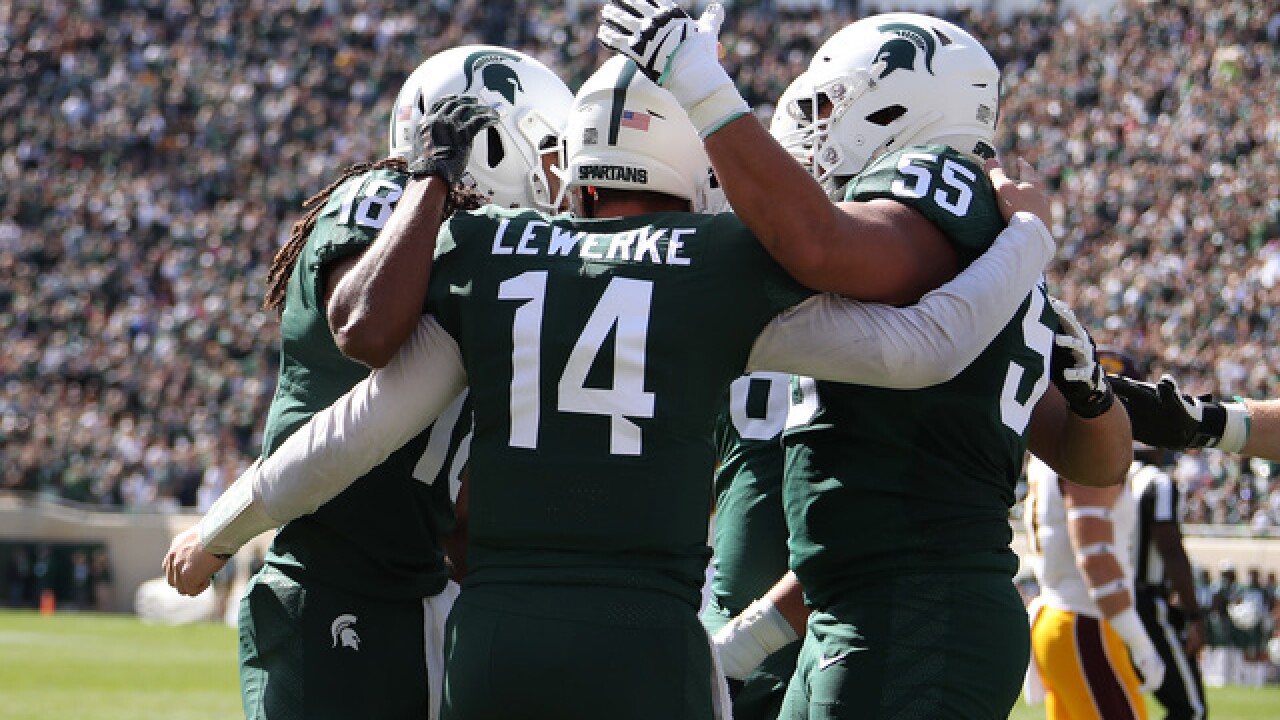 Brian Lewerke ran for two touchdowns in the first half, and No. 21 Michigan State overcame a slow start and an underwhelming finish to beat Central Michigan 31-20 on Saturday.

The Spartans entered with the nation's top-ranked run defense and held CMU to 5 yards on the ground in the first two quarters. Michigan State led 31-3 before letting the Chippewas rally a bit in the fourth.

Connor Heyward and La'Darius Jefferson also ran for touchdowns for the Spartans.

CMU (1-4) kicked a field goal on the game's first possession and held that lead at the end of the first quarter. Lewerke threw an interception in the end zone in the first, but the Spartans (3-1) would have plenty of chances in the red zone.

Lewerke scored on runs of 3 and 5 yards, and Michigan State led 17-3 at halftime. CMU's Tommy Lozzaro threw two interceptions in the first half, giving the Spartans great field position.

Heyward and Jefferson scored their TDs in the third, but the Spartans didn't close the game out very emphatically. CMU scored a touchdown, recovered an onside kick and then kicked a field goal to make it 31-13. Then the Chippewas scored on a trick play, with running back Jonathan Ward throwing a 29-yard scoring pass to Tony Poljan with 6:44 remaining.

The Spartans, who were without running back LJ Scott for a second straight game, were able to run out the clock after that.

THE TAKEAWAY
CMU: The Chippewas kept this game close for most of the first half, but the turnovers by Lazzaro made a difficult task even harder. The late comeback made the final score respectable.
Michigan State: The Spartans aren't at full strength, and mistakes like Lewerke's interception could cause bigger problems against better competition. Still, this was a dominant defensive performance until the final quarter, and if that continues, the Spartans can certainly be a factor in the Big Ten.

POLL IMPLICATIONS
The Spartans never seemed like they were in much danger of losing, but they didn't rack up many style points against an opponent they were expected to beat easily.

UP NEXT
CMU: The Chippewas host Buffalo next Saturday.
Michigan State: The Spartans go back to their Big Ten schedule with a home game against Northwestern next Saturday.