No. 14 Michigan looks to roll over Northwestern 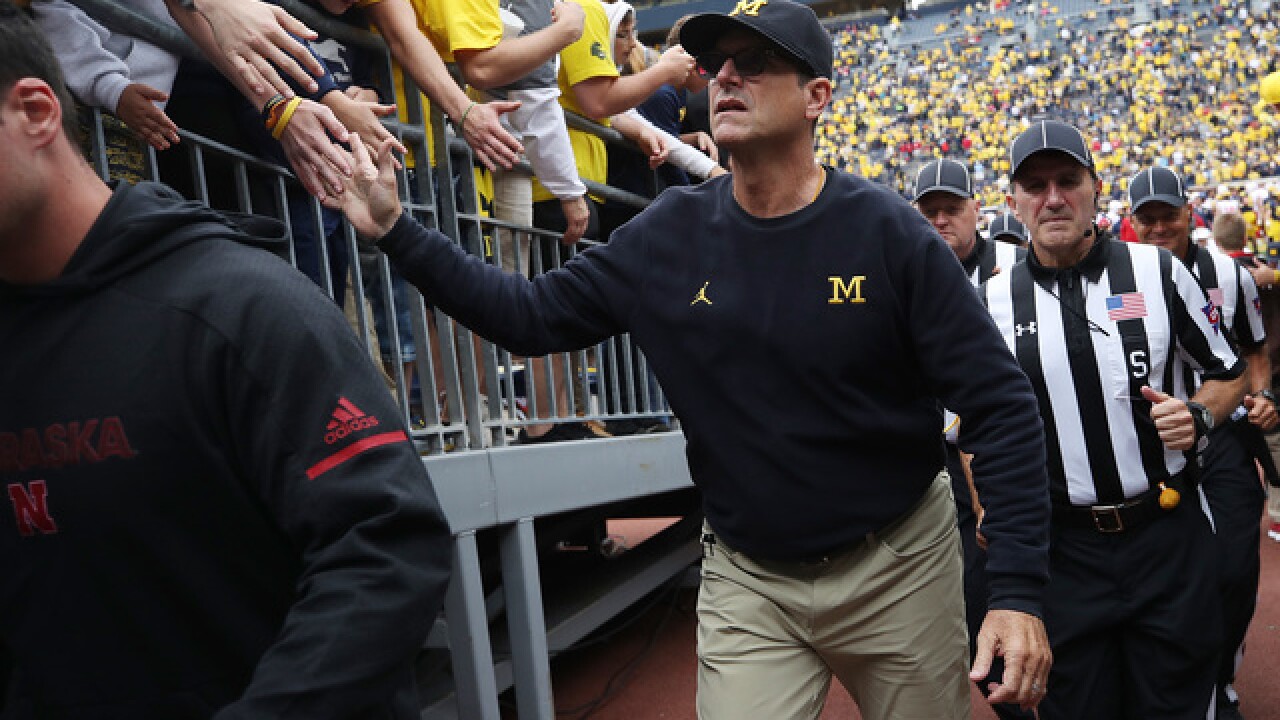 EVANSTON, Ill. (AP) -- On the surface, this seems like a good time for No. 14 Michigan to visit Northwestern.

The Wolverines come rolling into the game on Saturday with three straight blowout wins since they dropped the opener and the Wildcats are reeling.

Not only has Northwestern (1-2, 1-0 Big Ten) lost two in a row, top running back Jeremy Larkin informed his team Monday that he had to stop playing football because of a spinal condition.

"He gave an amazing speech, and he's not looking for a pity party," coach Pat Fitzgerald said.

The Wolverines have outscored their opponents 150-33 in the three games since a season-opening loss to Notre Dame. They pounded Nebraska 56-10 last week. And the team they're about to face is staggering, with back-to-back losses at home to Duke and Akron following a season-opening win at Purdue.

Northwestern led the Zips by 18 two weeks ago, only to fall 39-34. And they got hit with another big loss when Larkin announced he had to stop playing because he has cervical stenosis. Though the school said the condition is not life-threatening, it causes a narrowing of the spinal canal in the neck and upper back.

A sophomore in his first season as the top running back, Larkin had 346 of the Wildcats' 351 yards rushing and five of their seven TD runs. He averaged 4.8 yards per carry.

"He didn't want us to feel bad for him," quarterback Clayton Thorson said. "He told me today he's really blessed that the doctors caught this."

Michigan has won five straight against Northwestern, though three of those games were decided by eight points or less. A win by the Wildcats would give them their first 2-0 conference start since 2000.

OFFENSE, DEFENSE
While Michigan boasts one of the nation's top defenses, Northwestern has been struggling with the ball. The Wildcats' offense ranks third from the bottom of the Big Ten in both scoring (24 points per game) and yards per play (4.9). That doesn't bode well, considering Michigan ranks third in the nation and leads the conference in total defense. The Wolverines are also tied for third in the country and lead the Big Ten in pass defense.

THE RUNDOWN
With Larkin out, John Moten IV figures to get the first shot as the No. 1 running back. But true freshmen Isaiah Bowser and Drake Anderson could eventually get the job. Moten, a junior, has run for 416 yards and three touchdowns in his career. But he has just 21 yards and is averaging 1.8 per carry this season -- well below his career average of 4.8.

BACK IN BLACK?
Michigan may get Tarik Black, one of its top receivers, back on the field later this season. He had surgery on his right foot after hurting it in a preseason practice. Black is off crutches and will be evaluated soon for a possible return.
"His doctor will be coming into town when the Packers play the Lions," Harbaugh said. "I think he's got a scheduled appointment then to take a look at it. Could have some good news at that point. Things look really good."

MAKING MARK
A healthier Northwestern quarterback Clayton Thorson could help make up for the loss of Larkin. He has been shouldering more and more of the load at QB as he works his way back from a torn anterior cruciate ligament in his right knee, though TJ Green continues to lead some drives. Already Northwestern's winningest quarterback, Thorson became the school's leader in touchdown passes with 47 two weeks ago. He was 33 of 52 for a career-high 383 yards with three TDs, but threw two interceptions and lost a fumble on a strip-sack in the second half that resulted in scores for Akron.

MICHIGAN MAN IN PURPLE
Northwestern defensive coordinator Mike Hankwitz has strong connections to Michigan -- the school and the state. Hankwitz was born in Ludington, Michigan, and played for Bo Schembechler and the Wolverines. Ludlow started his coaching career under him at the school in 1970 and went on to become a defensive coordinator at Western Michigan in the early 1980s for Jack Harbaugh, father of Michigan's current coach.