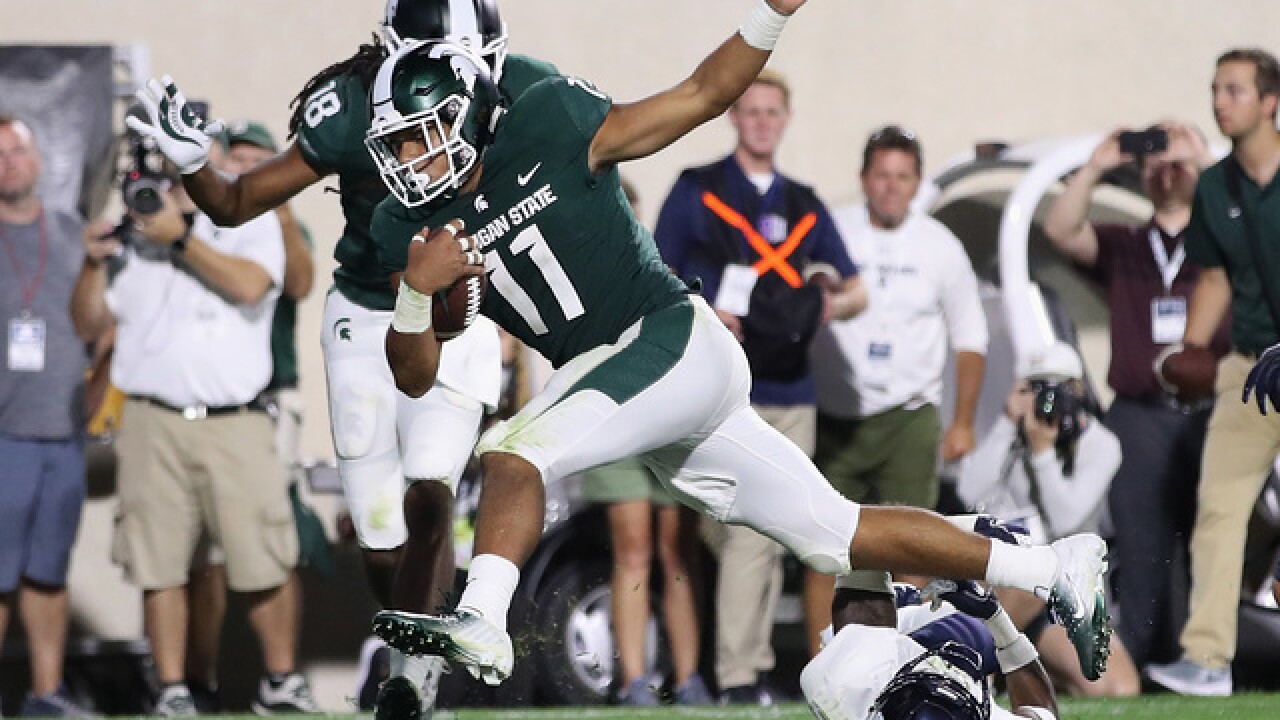 EAST LANSING, Mich. (AP) -- Connor Heyward scored his second touchdown with 2 minutes left to put No. 11 Michigan State ahead and the Spartans held on to beat Utah State 38-31 on Friday night.

The Spartans trailed until the second quarter, built a 13-point lead late in the third and fell behind late in the opener for both teams.

Darwin Thompson put the Aggies ahead with a 1-yard run, his second go-ahead score of the game, with 5:05 remaining. Their defense couldn't make one more stop to beat the highest-ranked team in school history, surpassing the victory over No. 18 BYU in 2014.

Utah State did have one more chance to send the game to overtime -- or possibly pull off the upset -- but Joe Bachie tipped and intercepted a pass at midfield with 1:15 remaining.

Michigan State's Brian Lewerke was 23 of 33 for 287 yards with two TDs, an interception and a fumble. He threw an 8-yard TD pass to Cody White with 10:49 left in the first half, giving the Spartans their first lead.

"It took a little bit to get going," Lewerke acknowledged.

Jordan Love capped the opening, 75-yard drive with a 1-yard run and completed 29 of 44 passes for 319 yards with two interceptions for the Aggies, who went home proud of their performance.

Heyward's first career rushing score was on a 17-yard TD in the third, which put Michigan State up 27-14. He is the son of the late Craig "Ironhead" Heyward, an NFL running back from 1988-1998. The sophomore ran for 436 yards on kickoff returns, had a combined 23 yards rushing and receiving and had one TD reception last season.

LJ Scott ran for 84 yards on 23 carries and had 57 yards receiving on three catches for the Spartans.

THE TAKEAWAY
Utah State: Wells helped the Aggies earn a bowl bid last year for the sixth time and in seven seasons and they seem to have a shot at playing in the postseason again. Their no-huddle, hurry-up offense is going to be a problem for some teams. On defense, they can pressure quarterbacks and make plays in the secondary. They also have experience with eight starters back on both sides of the ball.
Michigan State: Mark Dantonio will have plenty of teachable moments to show the Spartans on film. They were able to overcome a sloppy game with nine penalties against a Mountain West Conference program, but may not be as fortunate against Big Ten competition.
Michigan State made mental and physical mistakes that led to penalties, settling for field goals twice after driving to the Utah State 1 twice.
"We can't do that in this conference," co-offensive coordinator Dave Warner said.

POLL IMPLICATIONS
The Spartans could slip due to the lackluster performance, especially if teams just ahead and behind them in the poll open with a win.

STREAKING
Michigan State won its 20th straight home opener, dating to its 23-16 loss as the 23rd-ranked team to No. 15 Colorado State in 1998 during Nick Saban's fourth of five seasons. The Spartans have not started the season with a loss at home to an unranked team since losing to Central Michigan in 1991.

ON THE MOVE
The Aggies' no-huddle offense created problems for Michigan State, which tried to substitute players in and out of the game on defense during drives.
"We had to stop doing that," defensive coordinator Mike Tressel said.