FOX 47 is operating at reduced power. Your signal may be effected!
SportsCollege Sports 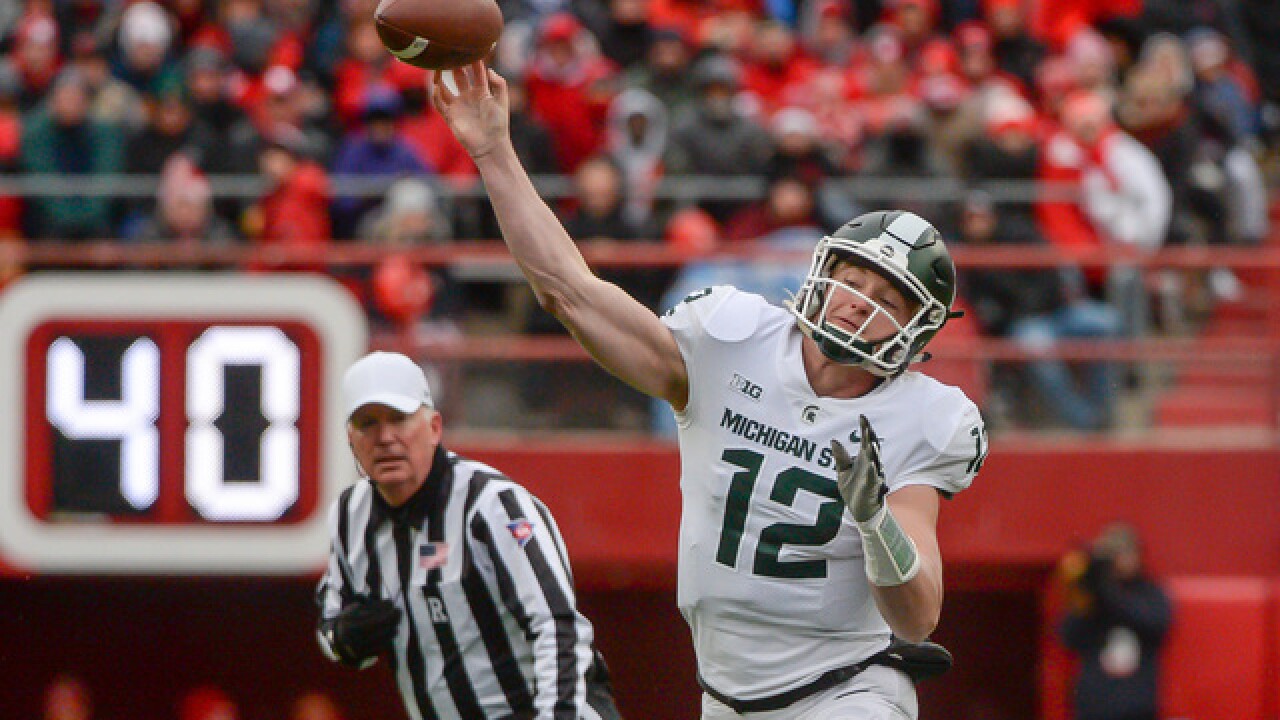 Copyright Getty Images
Steven Branscombe
<p>LINCOLN, NE - NOVEMBER 17: Quarterback Rocky Lombardi #12 of the Michigan State Spartans attempts a pass against the Nebraska Cornhuskers in the first half at Memorial Stadium on November 17, 2018 in Lincoln, Nebraska. (Photo by Steven Branscombe/Getty Images)</p>

Barrett Pickering kicked three field goals in the fourth quarter, the last one a 47-yarder with 5:13 left, as Nebraska came from behind to beat Michigan State 9-6 on Saturday.

Initial research indicated it was the first time Nebraska had won a game without scoring a touchdown since a 3-0 victory over Kansas State in 1937.

The Spartans (6-5, 4-4 Big Ten) got field goals of 34 and 26 yards from Matt Coghlin but were unable to sustain offense against a Nebraska defense that has struggled most of the season.

Nebraska (4-7, 3-5), which had put up some of the best offensive numbers in the nation the past six weeks, tied it at 6-all on Pickering field goals of 36 and 20 yards.

The Huskers got the ball back when Antonio Reed and Dedrick Young knocked the ball out of MSU tight end Matt Dotson's hands for an incomplete pass to force a punt. Nebraska ran six plays before Pickering connected for the winning field goal with a strong north wind at his back.

Nebraska, which had gone over 450 total yards in seven straight games, generated just 248. Devine Ozigbo ran 18 times for 74 yards to become the first Nebraska player since 2014 to go over 1,000 for the season.

Adrian Martinez threw for 145 yards, and Stanley Morgan caught four balls for 67 yards to become the school's career leader in receptions with 182.

With a gray sky and intermittent snow flurries, 21-mph north wind and a feel-like temperature of 15 degrees, it was a classic mid-November Big Ten football setting.

The game was chippy from the outset. The teams combined for four unsportsmanlike conduct penalties and one roughing the passer penalty.

THE TAKEAWAY
Michigan State: The Spartans are a mess offensively. They gained 289 total yards, but between dropped passes and big stops by the Nebraska defense, they couldn't sustain any drives.
Nebraska: The Huskers' defense has given up a lot of yards and points this year, but they played their best game of the season.

UP NEXT
Michigan State hosts Rutgers on Saturday.
Nebraska visits Iowa on Friday.