The Latest: Low-key national signing day, even at Michigan 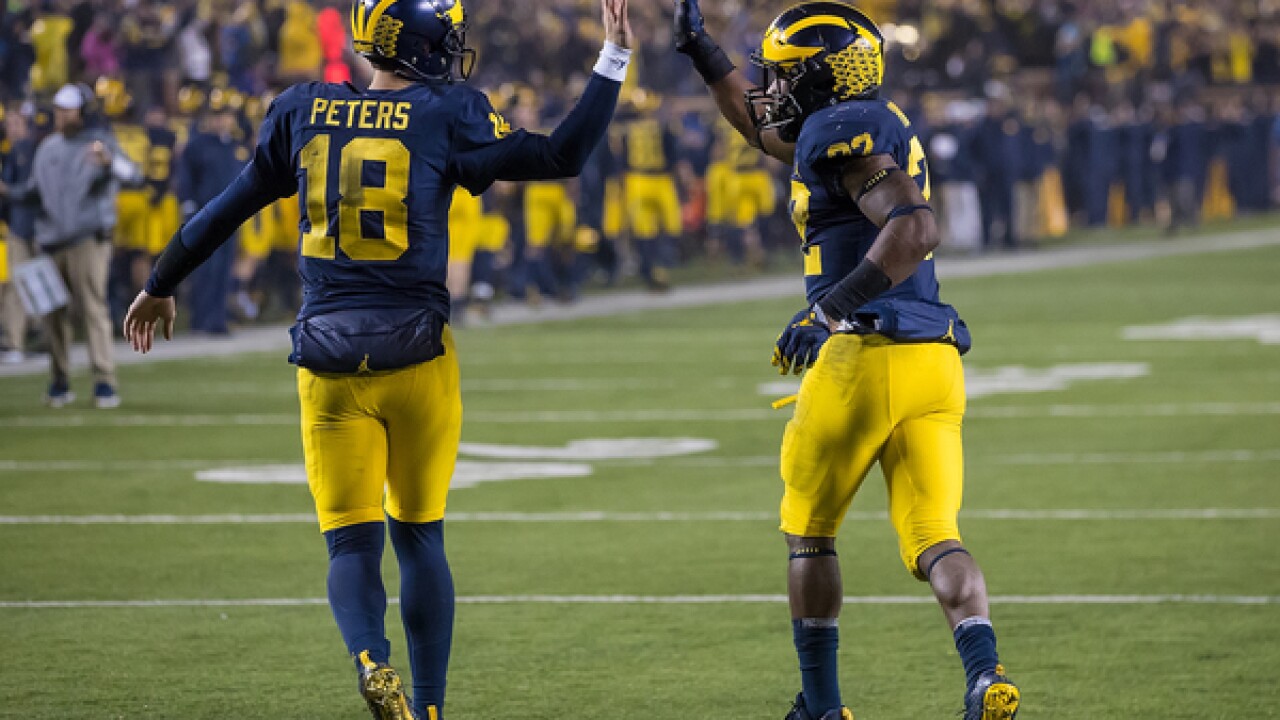 Michigan coach Jim Harbaugh dialed down the hype on signing day after being part of pomp and circumstance the previous two years at a downtown theater and the school's basketball arena.

When asked why, Harbaugh said at his news conference at the football performance center Schembechler Hall, "It's just what we decided to do."

It was reflective of Wednesday's national signing day, which was relatively calm after most FBS teams filled the majority of their 2018 classes in December. Most schools were just topping their classes on the traditional February date — the first Wednesday of the month.

But the low-key venue at Michigan may have something to do with Harbaugh coming off an eight-win season after earning 10 victories in each of his first two seasons with the Wolverines. And, a relatively lackluster recruiting class ranked No. 21 might have also been a factor.

Harbaugh, though, said he plans to move forward with another international trip with his players this spring a year after taking them to Italy.

"We hope and are planning to go abroad: Paris and Normandy," he said.

The Ducks scored four-star offensive guard Penei Sewell, who hails from Saint George, Utah, is considered one of the top offensive linemen in the nation.

The 6-foot-5, 310-pounder made his choice dramatic: He had been expected to announce his commitment during the early signing period in December but then he decided to wait.

And he was one of the last future Ducks to officially commit on Wednesday.

"It's a great example of the type of battles that Oregon is capable of winning. He's an ultimate difference maker," Cristobal said.

Oregon State squared off with Nebraska and the Beavers came out OK.

They lost one potential recruit to Nebraska, but lured another one from the Huskers on Wednesday's national signing day.

But Smith did land Matthew Tago, a four-star outside linebacker out of Palmdale, California, who was also considering Nebraska.

The Beavers were challenged in recruiting by last year's upheaval and a 1-11 overall record: Former coach Gary Andersen stepped away in the midst of last season.

The grandson of Dallas Cowboys owner Jerry Jones is carrying on the family tradition at Arkansas.

John Stephen Jones signed with the Razorbacks on Wednesday, and his granddad attended the signing ceremony at Highland Park High School, not far from downtown Dallas. The younger Jones led the Scots to consecutive Class 5A Texas state championships.

Jerry Jones was a lineman on the 1964 Arkansas team that went 11-0 and finished No. 2 in The Associated Press rankings with a 10-7 win over Nebraska in the Cotton Bowl. One of Jones' teammates was Jimmy Johnson, his first hire as coach when he bought the Cowboys in 1989. They won two Super Bowls together.

ESPN updated the Jacob Copeland story, showing video of Copeland's mother and her son hugging, not long after the mom walked out of the Florida wide receiver's signing ceremony.

Moments earlier Wednesday, Copeland was surrounded on national signing day by several people, most of whom were either wearing Alabama gear or Tennessee gear. Seated to his right was his mother, wearing an Alabama sweatshirt and a Tennessee knit hat.

Copeland was surrounded on national signing day Wednesday by several people, most of whom were either wearing Alabama gear or Tennessee gear. Seated to his right was his mother, wearing an Alabama sweatshirt and a Tennessee knit hat.

As soon as Copeland grabbed a Florida hat and announced he would play for the Gators rather than Alabama or Tennessee, Copeland's mother left the table.

Copeland says that he felt most welcome at Florida among his three finalists, adding "I couldn't go with my mom, I wanted to go with my heart."

The top-rated player in the state of Alabama is going to ... Clemson.

Wide receiver Justyn Ross from Phenix City, Alabama, picked Clemson on signing day Wednesday, joining another top 10 class for Dabo Swinney and the Tigers. Pulling Ross away from the in-state Crimson Tide, might have been enough to keep Alabama from cracking the top-three in the final class rankings.

As the afternoon rolls around out West, Southern California is picking up steam. The Trojans landed cornerback Olaijah Griffin, the son of rapper Warren G, and linebacker Solomon Tuliaupupu. The Trojans could finish with a top-10 class if they can clean up late with SoCal players.

Washington coach Chris Petersen has finished off the best recruiting class of his career.

The Huskies signed two players on Wednesday to finish off their 2018 recruiting class. The majority of Washington's class signed back in December but the Huskies made noise with who they signed in the weeks since. Washington's class was rated by 247sports.com as nearly dead even with Southern California for the best in the Pac-12 and clearly among the top 15 nationally.

Washington was hopeful of putting a major cap on its class, but star defensive end Jeremiah Martin from Southern California committed to Texas A&M.

Georgia and Ohio State both got some good news on signing day.

The Bulldogs look as if they will hold off Alabama in the race for the top recruiting class on Wednesday's national signing day. Georgia flipped linebacker Quay Walker from his Alabama commitment and signed the four-star prospect.

According to 247 Sports' composite rankings, coach Kirby Smart and the Bulldogs have locked up the No. 1 class. The Crimson Tide had seven straight No. 1 classes.

Meanwhile, Ohio State announced some good news of its own.

Meyer and Ohio State athletic director Gene Smith also say they were close on a two-year contract extension for the coach.

It was a boost for Stanford's recruiting class on Wednesday's signing day.

But the Cardinal will have to wait two years for the four-star McKee to suit up in the Pac 12.

McKee is a Mormon and will do a two-year LDS church mission before attending college.

This is a lighter national signing day than usual because the majority of prospects signed in December.

Northwestern coach Pat Fitzgerald made that point clear early Wednesday morning when he tweeted "6:34 a.m. ... that's a wrap on #NSD18 and #NUView18."

Fitzgerald's tweet came after he announced the early morning signings of offensive lineman Sam Stovall and defensive back A.J. Hampton.

The rest of Northwestern's class had signed in December.

Most FBS teams filled the majority of their 2018 classes in December. The traditional February date — the first Wednesday of the month — has most teams just topping of their classes.

Frost has made up for lost time since Nebraska hired him in early December. Mike Riley's class was imploding when he was fired and ranked No. 89 in the 247 composite team rankings. Frost is expected to finish with a class of 24 to 27 players that is expected to be in the top 25.

One of the big decisions Nebraska awaits is from four-star running back Maurice Washington of Cedar Hill (Texas) Trinity Christian. Washington is weighing offers from Nebraska and Arizona State, which is recruiting him as a defensive back.

Petit-Frere kept his choice quiet. He was one of the biggest mysteries among top remaining players. His last official visit was to Columbus, Ohio. It was a big get for the Buckeyes and Urban Meyer, who lost out on in-state tackle Jackson Carman in December.

Five-star cornerback Patrick Surtain Jr. has committed to Alabama. The son of the former NFL player by the same name was considered the top unsigned prospect left to commit. The Tide beat out LSU and Miami and might have ensured a top-three overall class by landing Surtain.

It was quite a signing ceremony at American Heritage High School in Florida. Surtain's teammate and fellow star cornerback, Tyson Campbell, announced he would sign with Georgia, picking the Bulldogs over Miami and Alabama.

Andrew Chatfield kicked it off at American Heritage. The four-star defensive end chose Florida over Miami, with the help of a Chuckie doll.

National signing day is huge on social media as colleges often tweet out a welcome announcement for each new player entering the program.

Definitely no time to have a Twitter account suspended but that's exactly what happened to South Florida and Missouri on Wednesday morning.

The same thing happened the day before signing day to Texas, though the account was re-opened about an hour later. USF and Mizzou also had their accounts churning out welcome tweets within an hour of the shutdowns.

Accounts are often suspended for tweeting or retweeting copyrighted material such as images and songs.

Florida State and new coach Willie Taggart had some work to do to catch up with the other traditional powers on national signing day and the Seminoles got off to a nice start.

One of the first announcements of the day out of Tallahassee, Florida, on Wednesday was Florida State flipping star running back Anthony Grant from a Tennessee commitment.

Florida State could push to the finish with a top 10 class.

Georgia and Ohio State head into the national signing day with a chance to lock up the title of No. 1 class, while Alabama is closing fast along with traditional powers with new coaches.

Most FBS teams filled the majority of their 2018 classes during the new early signing period in December. The traditional February date has most teams just topping of their classes. Georgia had the top-ranked class, according to 247 Sports' rankings, heading into Wednesday. Ohio State was second.

Alabama, which has won seven straight recruiting championships to go with those five national titles, still has a chance to sign a top-three class.

The top unsigned prospect is Patrick Surtain Jr., a cornerback from Florida whose father played in the NFL. LSU and Alabama are among his choices.