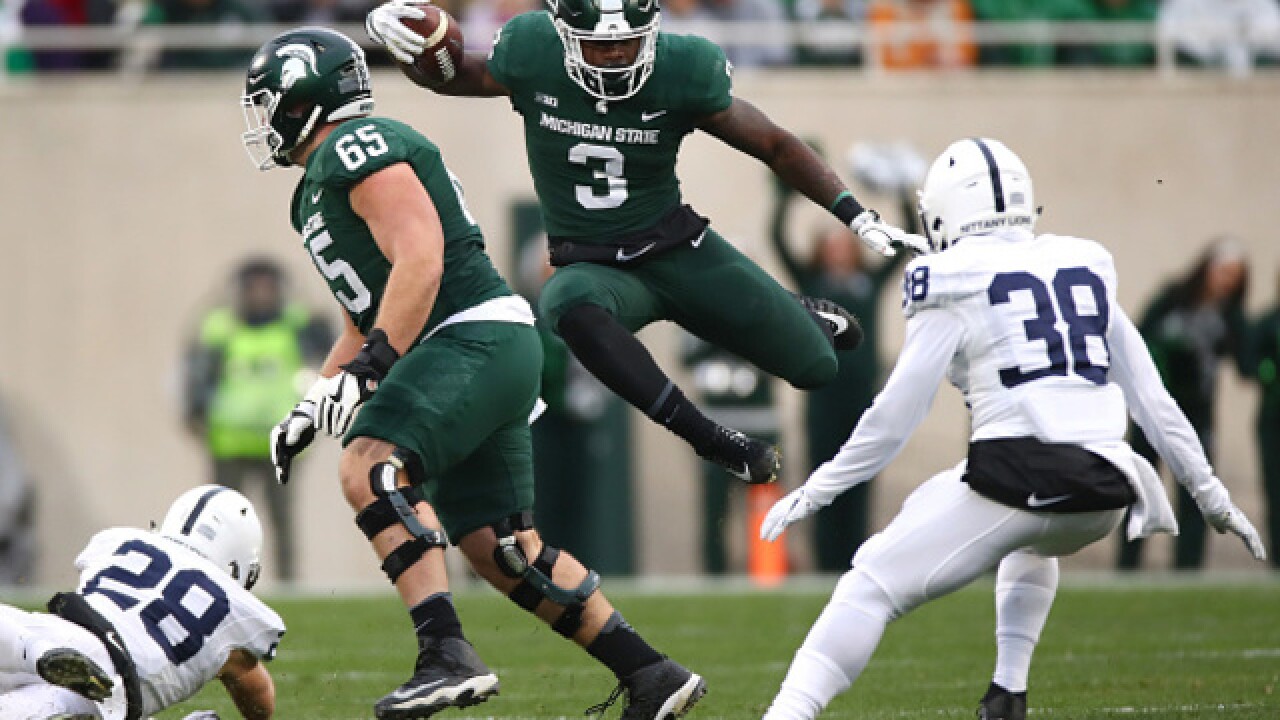 Image copyright 2017 Getty Images. All rights reserved. This material may not be published, broadcast, rewritten, or redistributed.
Gregory Shamus
<p>EAST LANSING, MI - NOVEMBER 04: LJ Scott #3 of the Michigan State Spartans jumps past the tackle of Troy Apke #28 of the Penn State Nittany Lions during the first half at Spartan Stadium on November 4, 2017 in East Lansing, Michigan. (Photo by Gregory Shamus/Getty Images)</p>

Matt Coghlin kicked a 34-yard field goal as time expired to give No. 24 Michigan State a 27-24 victory over No. 7 Penn State on Saturday night in a game that was delayed nearly 3 1/2 hours by severe weather in the second quarter.

Brian Lewerke threw for 400 yards and two touchdowns for the Spartans (7-2, 5-1 Big Ten, No. 24 CFP), and Michigan State was aided at the end by a roughing the passer call on Penn State's Marcus Allen. Lewerke was hit by Allen on a third-down pass that fell incomplete in the final minute. The penalty moved the ball to the Penn State 22, and the Spartans were able to run the clock down before Coghlin's winning kick.

The redshirt freshman made the kick, then ran back down the field and slid across it on his stomach while his teammates joined him in celebration.

It was the second straight tough loss for Penn State (7-2, 4-2, No. 7), which fell 39-38 at Ohio State last weekend and may have had its national title hopes crumble for good Saturday. Now it's Michigan State — which went 3-9 last season — that will take its improbable division title hopes into a showdown at Ohio State next weekend.

Trace McSorley threw for 381 yards and three touchdowns for Penn State, but Nittany Lions star Saquon Barkley was held in check. He had 0 yards rushing in the first half and finished with only 63. McSorley was intercepted three times.

Penn State was ahead 14-7 in the second quarter when the game was halted for a lengthy weather delay. The game had a noon start time and didn't end until after dark.

Penn State: The Nittany Lions will wonder what might have been after two straight road defeats that came down to the final minutes. They may regret not being able to involve Barkley more. His streak of 15 straight games with a touchdown was snapped.

Michigan State: The Spartans will presumably be underdogs again next weekend at Ohio State, but coach Mark Dantonio has them winning big games and contending for championships again after last season's nightmare. And Lewerke is only a sophomore.

Penn State: The Nittany Lions get what should be a bit of a breather after this difficult stretch of their schedule. They host Rutgers next Saturday.

Michigan State: The Spartans play at Ohio State for the first time since beating the Buckeyes there two years ago en route to a Big Ten title. The teams met last season in East Lansing, with Ohio State coming away with a narrow victory.