No. 24 Michigan State holds on to beat Indiana 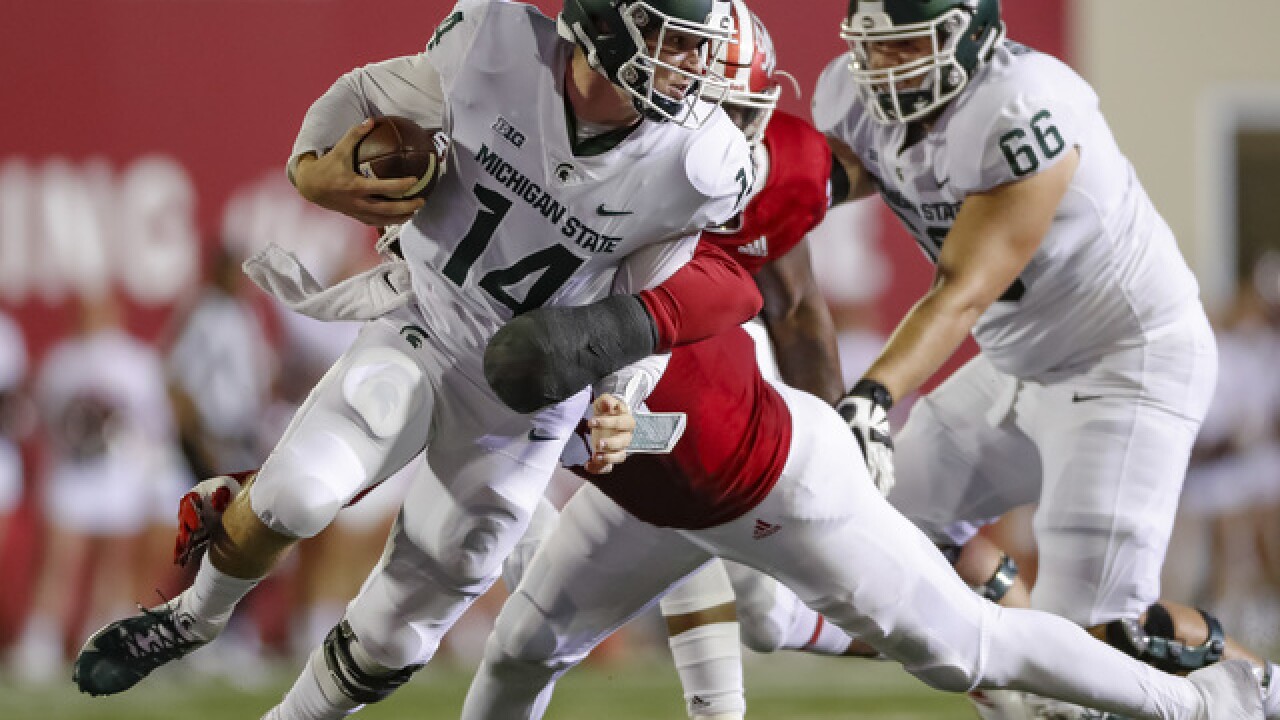 Copyright Getty Images
Michael Hickey
<p>BLOOMINGTON, IN - SEPTEMBER 22: Brian Lewerke #14 of the Michigan State Spartans is tackled for a sack by Nile Sykes #35 of the Indiana Hoosiers during the first half of action at Memorial Stadium on September 22, 2018 in Bloomington, Indiana. (Photo by Michael Hickey/Getty Images)</p>

Brian Lewerke threw two touchdown passes, had his first career catch and made the perfect pitch to kicker Matt Coghlin for a 6-yard scoring run in No. 24 Michigan State's 35-21 victory over Indiana on Saturday night.

Michigan State needed a few tricks to pull it out.

"I thought we played extremely well," Spartans coach Mark Dantonio said. "The fake field goal was executed well, and I thought we had great focus."

The Spartans jumped to a quick 14-0 lead on Lewerke's 16-yard TD pass to Jalen Nailor and Shakur Brown's 69-yard interception return for a score.

Indiana cut the deficit in half on Peyton Ramsey's 8-yard TD pass midway through the second quarter, and Michigan State answered with an 11-yard TD pass from Lewerke to Matt Dotson with 19 seconds left in the first half.

Lewerke's well-timed pitch to Coghlin on the fake field goal made it 28-7 -- putting Indiana in its largest deficit of the season.

Then Lewerke helped the Hoosiers get back in the game.

His first interception set up a chip shot field goal and Peyton Ramsey converted the second interception into a 65-yard TD pass to Whop Philyor and a 2-point conversion pass to Nick Westbrook to make it 28-18 with 8:20 left.

Indiana got seven on a 36-yard field goal with 3:28 to go, but the Spartans closed it out with Nailor's 75-yard TD run.

"There was pressure on our quarterback in the pass game and we ran for 29 yards. Very, very disappointing, so we have to address that," Indiana coach Tom Allen said. "Just a tough sledding day."

Lewerke finished 14 of 25 with 213 yards. Nailor had three carries for 79 yards and Felton Davis III had five catches for 79 yards.

Ramsey was 32 of 46 with 272 yards, two touchdowns and two interceptions.

Philyor, who had five catches through three games, caught 13 passes for a career-high 148 yards. He matched his single-game career best for receptions.

THE TAKEAWAY
Michigan State: The Spartans never trailed but they sure struggled to seal it and showed they need to find a knockout punch. But at least they got a crucial road win to stay in the  Big Ten hunt.
Indiana: The Hoosiers seemed to have all the momentum after starting 3-0 but struggled to run the ball and struggled to find offensive rhythm against Michigan State's stout defense. Now, Indiana must try to figure out what went wrong.

UP NEXT
Michigan State: The Spartans play their first home game in a month next Saturday when Central Michigan visits.
Indiana: The Hoosiers hope to rebound at Rutgers next Saturday.