Great Scott: MSU runs over Minnesota, hangs on for 30-27 win 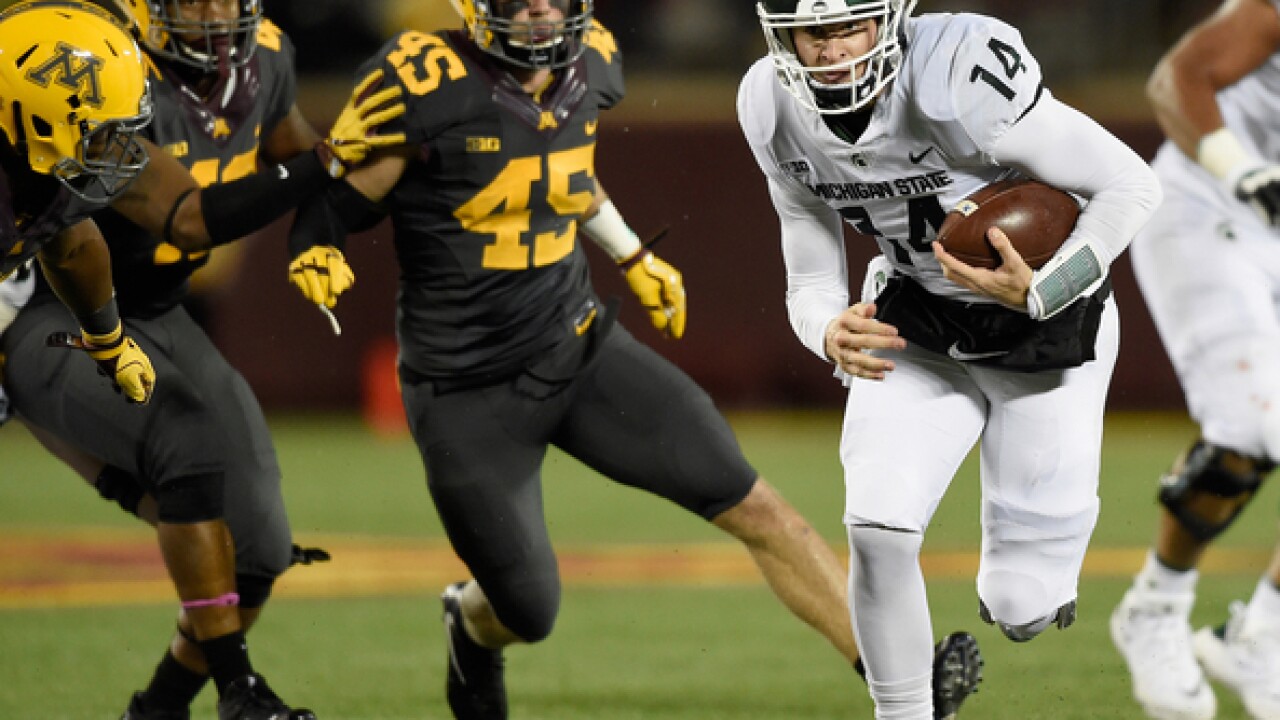 L.J. Scott returned from an injury to rush for a career-high 194 yards and two touchdowns, helping 21st-ranked Michigan State hang on for a 30-27 victory over Minnesota on a soggy Saturday night after kickoff was delayed 34 minutes by lightning strikes.

Madre London pitched in 74 yards rushing and a score, Matt Coghlin made three field goals and the Spartans (5-1, 3-0 Big Ten) maintained the momentum created by beating Michigan on the strength of a dominant performance by their offensive line.

Demry Croft relieved a struggling Conor Rhoda at quarterback for the Gophers (3-3, 0-3) in the middle of the second quarter and connected with Tyler Johnson for three touchdown passes in the fourth. The late surge wasn't enough to overcome the bruising, pulling and trapping Spartans blockers who wore down an injury-depleted Gophers defense.

Scott was only a spectator for the fun in the previous game, when the Spartans went on the road and forced five turnovers by the Wolverines to hold on through a thunderstorm for a 14-10 win.

That proved to be a beneficial experience, given the torrential rain that fell sideways in the swirling wind right before the game and during much of the first half. The wet weather was a major factor early. Punter Jake Hartbarger dropped a high snap after a three-and-out by the Spartans on their first possession, and the Gophers jumped on the ball at the 3.

But just as they did later in the first quarter after an interception of Brian Lewerke by Gophers safety Duke McGhee at the 34, the Spartans stiffened on defense and gave up only a field goal. The Gophers netted 1 yard on those two scoring drives.

The Spartans had 199 yards rushing, excluding the 28-yard loss Hartbarger took on the fumble, through three quarters. They held the ball for 13:28 in the third quarter, with just 1:32 of possession time for the Gophers.

Michigan State: Having already established last week that their 3-9 record in 2016 was the aberration, not the 65 wins over the previous six years, the Spartans are aiming higher after an encouraging first half of the season. They'll be favored to win their next two games, before the litmus test arrives with back-to-back matchups with Penn State and Ohio State. There's work to be done, as Lewerke will need to lead a more efficient and productive passing game, but confidence can go a long way.

Minnesota: The Gophers are headed toward a long first year under coach P.J. Fleck, with a once-dynamic running game struggling to keep the offense going. Croft could take over for Rhoda for good, though most of his success came after the Spartans took a commanding lead and let up a little.

Michigan State: The Spartans host Indiana, which took Michigan to overtime in a 27-20 loss on Saturday.

Minnesota: The Gophers host Illinois, which lost 35-24 to Rutgers on Saturday to fall to 2-10 in Big Ten play under coach Lovie Smith.