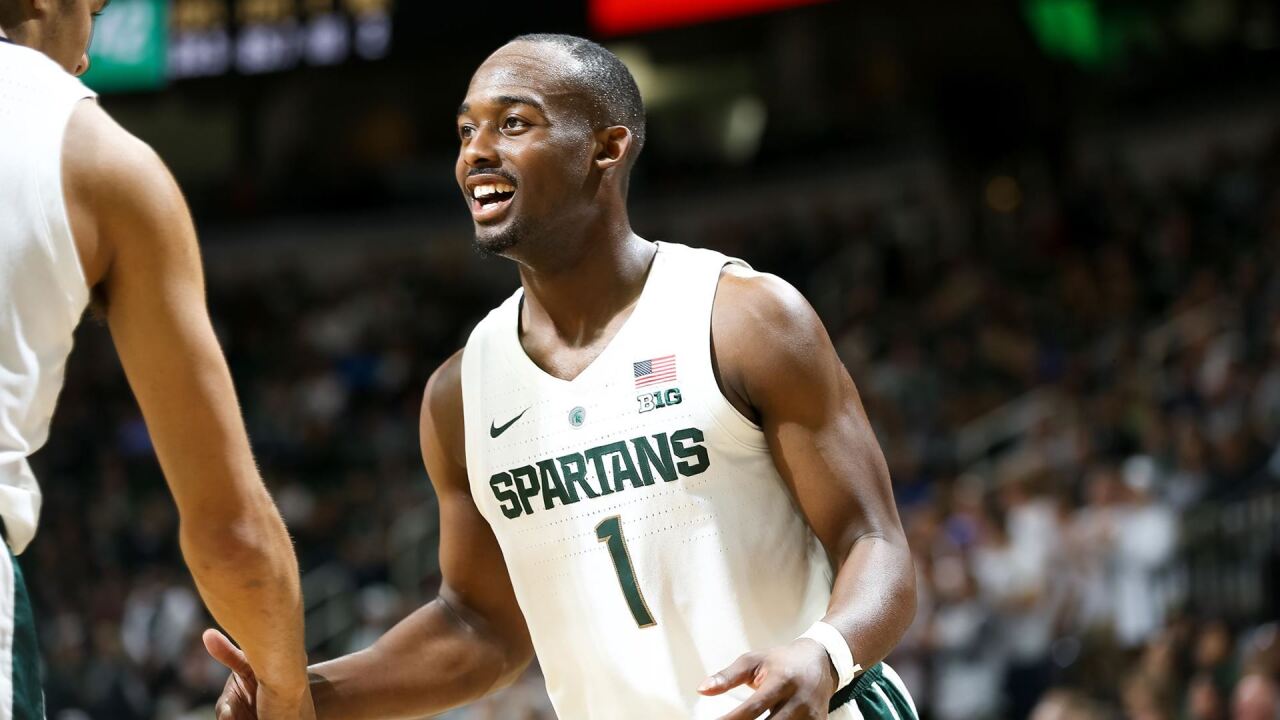 EAST LANSING, Mich. — Michigan State junior forward Josh Langford didn’t envision missing the second half of the basketball season due a stress fracture in his left ankle. But being sidelined hasn’t stopped him from having an impact, as he’s become a leader from the bench.

Langford sees a unique opportunity and challenge in the NCAA tournament. His job is important: helping and mentoring the younger players who haven’t experienced playing in big-time tournament games.

“Tournament time is a new season, Langford said. “In the regular season if we lost, we had a week to prepare for another game, now it’s win or go home. The margin of error becomes that much smaller. I’m really going to try and emphasize that to the younger guys. Everything has to be much more connected in order to win the games because this is a different beast.”

But Langford said belief in his teammates has never been stronger. They have won a share of the Big Ten season title and took the Big Ten Championship.

“This team is resilient,” Langford said. “Just how we react to adversity is special. This team has been through a lot of tough times this year, and on top of that, the outside world saying we were not going to be as good as last year because we lost two lottery picks.”

“So, put that all together and for us to go through all the trial and negative comments and to win a share of the Big Ten Championship and have a chance to accomplish more, speaks volumes to the character each guy has.”

His season changed Dec. 29, against Northern Illinois. Langford had played only 12 minutes in the first half after injuring his foot. What came after was a guessing game on social media, of when he would be able to return.

The speculation and noise weren’t a distraction for Langford, instead, he used it as motivation.

“I thought I was going to come back,” Langford, one of MSU’s co-captains, said. “When I tried to come back and it didn’t work out, I kind of felt inside I was going to have to do more than just sit out. It was a positive process. I learned how to make sure to not let what I see and hear affect what I feel in my heart.

“I wanted to come back, but I had to do what was best. This process helped me learn how to stay more positive, and I wouldn’t change it for the world.”

He underwent successful surgery in January and has been working hard on rehabilitation. His mobility was limited to a scooter to get around for some time, but he was able to move away from that after the first weekend of the NCAA Tournament. Langford is staying in shape by working out other parts of his body and is encouraged by the progress his foot has made.

“Rehab is going pretty well,” Langford said. “I’ve been listening to my trainers and my strength coach, working out my upper body and other leg, just trying to get stronger and stay active. You have to take it day by day, you have to make sure you are patient. It’s a tedious process.”

Langford now uses his time off the court to be another voice in his teammates’ ears. He does not want them to slow down and miss out on their goals because he isn’t out there on the court with them.

“Even though now it’s a little bit harder because I can’t stand up on my foot, I’m still trying to be that voice and leader for my teammates,” Langford said. “You can still try and connect with those guys in the huddles and in the practices. I always want to make sure that I am still involved and let them know that no matter the situation I’m in, I will always have their backs.”

Having Langford sidelined for the season is a blow for the Spartans, as he was second on the team in scoring with 15.0 points per game, fourth with 3.6 rebounds, third with 2.3 assists, third on the team in 3-point field goal percentage and third in minutes played.

He knew MSU would have to make a big line-up adjustment without him. Langford’s absence is significant, but he has made up for his physical loss with emotional support.

"Throughout the process, Josh has done everything asked of him, while maintaining an amazing attitude and doing whatever he could to help his teammates,” MSU Head Coach Tom Izzo said. “His selfless attitude is the reason there were tears throughout the meeting room when we shared the news with his team. I've never felt worse for a player than I do for Josh, but he's a very religious kid who believes everything happens for a reason.

“He's constantly telling me to not worry about him but focus on the team. It's the reason I have so much respect and admiration for the way he's handled the injury."

Izzo has been more than a coach for Langford throughout his journey, serving as mentor in becoming a leader on and off the court.

“Coach has done an unbelievable job of holding me accountable,” Langford said. “He may not notice, but one of the reasons why I was able to able to thrive in the position that I am in is because I’ve seen him go through adversity and deal with it.

“Coach has been a great encouragement to me, as well as my teammates, really everyone a part of the program has encouraged me. With that encouragement, it really pushed me to be that leader for them even though I’m not on the court.”