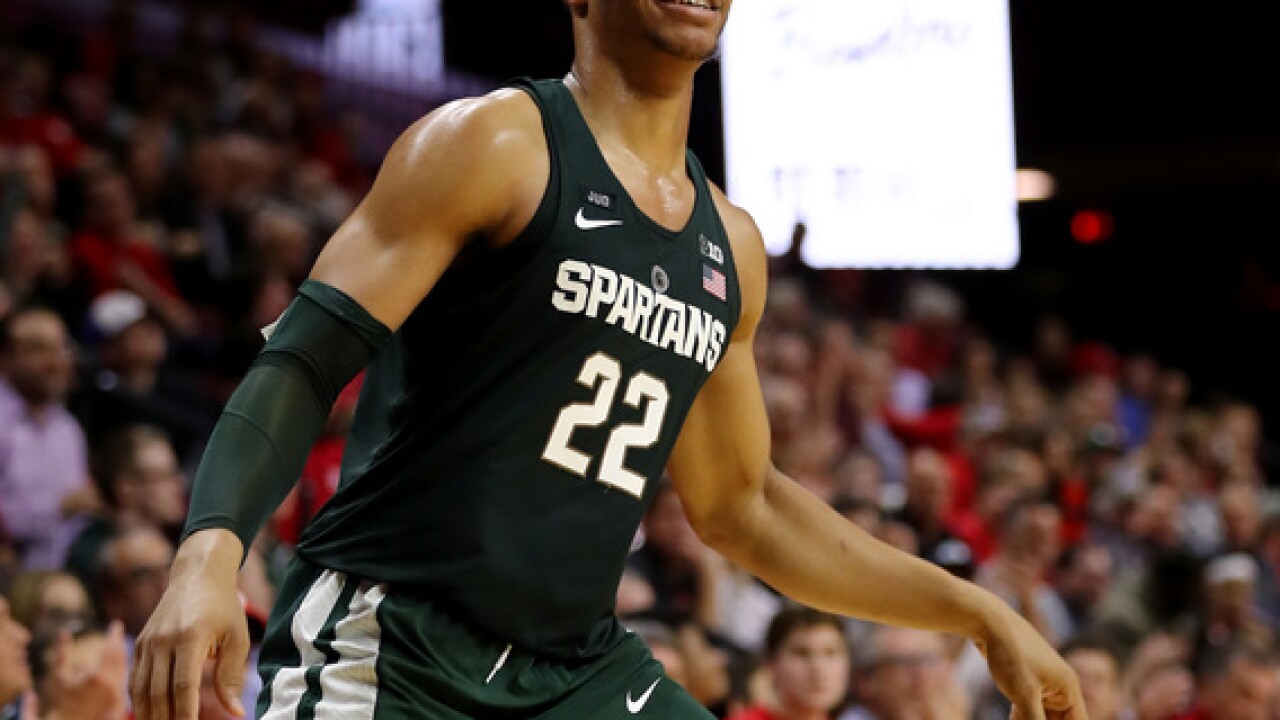 2017 Getty Images
Elsa
<p>PISCATAWAY, NJ - DECEMBER 05: Miles Bridges #22 of the Michigan State Spartans celebrates his three point shot in the second half against the Rutgers Scarlet Knights on December 5, 2017 at the Rutgers Athletic Center in Piscataway, New Jersey. (Photo by Elsa/Getty Images)</p>

Miles Bridges scored 21 points and No. 3 Michigan State overcame its worst offensive performance of the season with a 62-52 victory over surprising Rutgers on Tuesday night.

Jaren Jackson Jr. scored all 11 of his points in the second half and had eight of the Spartans' season-high 13 blocks in helping Michigan State (8-1, 2-0 Big Ten) post its seventh straight win. Joshua Langford added 15 points.

Rutgers (6-3, 0-2) made Michigan State work for this one, holding the Spartans to season lows in points and shooting percentage (38.6). The previous low was 63 points and 40 percent shooting against North Carolina.

What Michigan State did well was play defense. It came into the game with the nation's best field goal defense (34.2) and it held the Scarlet Knights to 25.8 percent shooting from the field (17 of 66).

Deshawn Freeman had 13 points and Geo Baker and Eugene Omoruyi added 11 apiece for Rutgers, which lost its third straight.

Trailing 45-43 with roughly 8 minutes to play, Mike Williams missed a 3-point attempt that could have given the Scarlet Knights the lead.

Jackson then scored inside and added two free throws to ignite an 8-3 run. Bridges set up one of Cassius Winston's two late 3-pointers and Jackson hit a free-throw to push the advantage to 53-45 with 3:03 to play.

The Spartans had taken the lead for good when Matt McQuaid hit a jumper for a 36-35 edge. Jackson followed with a layup and rebound dunk and Langford added a jumper for a 42-35 lead.

Playing a Michigan State team that had won its last six games by no fewer than 18 points, Rutgers stunned even its own home crowd by scoring the first eight points. A 19-4 spurt capped by eight straight points by Bridges allowed the Spartans to take a 21-14 lead with just over 7 minutes left in the half, but Rutgers responded with a 12-5 and went to the locker room tied at 26.

The 26 points were the fewest by the Spartans in an opening half this season, and half of them came from Bridges.

After losing to unbeaten Florida State, No. 14 Minnesota and the Spartans the past week, Rutgers takes a step down and plays host to NJIT on Thursday.