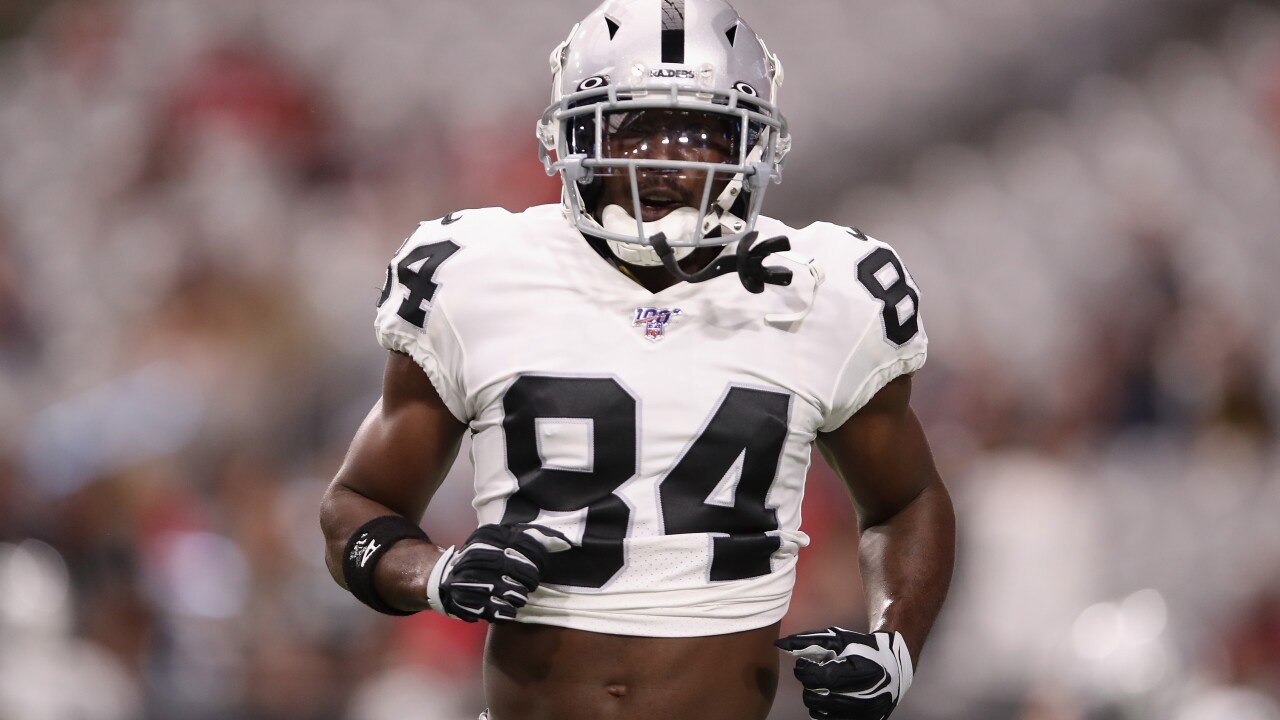 ALAMEDA, Calif. (AP) -- Star receiver Antonio Brown returned to the Oakland Raiders on Friday after a one-day absence and is set to play the season opener after apologizing following a run-in with general manager Mike Mayock that had put him in jeopardy of being suspended.

Brown addressed the team earlier in a meeting, a day after being sent home from the facility after a confrontation Wednesday at practice with Mayock. Brown had posted a letter earlier Wednesday from Mayock detailing nearly $54,000 in fines for missing a practice and walkthrough. Brown was also fined for the dust-up with Mayock, a person familiar with the punishment said on condition of anonymity because it wasn't announced. ESPN first reported the fine.

"We had a team meeting where Antonio addressed the team," quarterback Derek Carr said. "We were up there with him, a couple of captains. We communicated back and forth when that was done we were all excited to move forward."

ESPN had reported that the Raiders were planning to suspend Brown over the incident. Teams have the right under the collective bargaining agreement to suspend players up to four games for conduct detrimental to the team. A suspension would also void the more than $29 million in guarantees over the next two seasons contained in Brown's contract with the Raiders.

Coach Jon Gruden said the plan is for Brown to play Monday night at home against Denver.

"Antonio is back today," Gruden said. "We're really excited about that and ready to move on. He's had a lot of, obviously, time to think about things and we're happy to have him back and I know Raider Nation is excited about that, too."

Brown's return didn't stop the drama. He posted a video on YouTube on Friday night titled that includes audio of a phone conversation with Gruden. Gruden asks Brown whether he wants to be a Raider. Brown said he does and the question is if the Raiders want him. Gruden then urges Brown to stop all the theatrics and "just play football. How hard is that? You're a great football player. Just play football."

The video ends with Brown saying, "I'm more than just a football player, man. I'm a real person. It ain't about the football. I know I can do that. I show you guys that on the daily. This is my life. Ain't no more games."

The Raiders have been counting heavily on Brown to spark an offense that lacked playmakers a year ago. Brown had 686 catches and 9,145 yards receiving the past six seasons in Pittsburgh, the best marks ever for a receiver in a six-year span.

Even though he missed extensive time in training camp and practice on Thursday, the Raiders are still envisioning Brown having a major role in the opener against the Broncos.

"I planned on having him all along, we had as an offensive staff," offensive coordinator Greg Olson said. "A little bit of a glitch the other day but that's been cleared up. So nothing's really changed."

That's the same for the Broncos, who were off Thursday when all the questions about Brown's status were roiling. They've always figured Oakland's most dangerous offensive player would be on the field when the games start.

"It hasn't affected it at all because number one, the players weren't here yesterday when everything happened and we've just been assuming that he was going to play all along," Denver coach Vic Fangio said. "Obviously that's the way it looks right now."

This was just the latest development in a dramatic first season in Oakland for Brown, who has yet to step on the field for a game with his new team.

The Raiders acquired Brown after he wore out his welcome in Pittsburgh. Oakland gave up only a third- and fifth-round pick for the four-time All-Pro receiver and gave him a hefty raise with a new three-year contract worth $50.125 million.

But Brown was unable to practice at the start of training camp after getting frost bite on his feet during a cryotherapy accident in France.

Brown was activated July 28 and took part in one walkthrough and part of one practice before leaving the team to get treatment for his feet and to fight the NFL and the NFLPA over his helmet.

Brown lost two grievances with the league in his attempt to use an old helmet now banned for safety reasons. He skipped practice on Aug. 18, prompting Mayock to issue an ultimatum for Brown to be "all in or all out" and also to hand him a $40,000 fine.

Brown returned to the team the following day but then missed a mandatory walkthrough before an exhibition game in Winnipeg on Aug. 22, leading to a second fine of $13,950.

Brown publicized those fines on his Instagram account this week. Brown also wrote on the account: "WHEN YOUR OWN TEAM WANT TO HATE BUT THERE'S NO STOPPING ME NOW DEVIL IS A LIE. EVERYONE GOT TO PAY THIS YEAR SO WE CLEAR."

Brown had several issues in Pittsburgh as well, leading to the team's decision to trade him even though he topped 100 receptions and 1,200 yards receiving in each of the past six seasons.