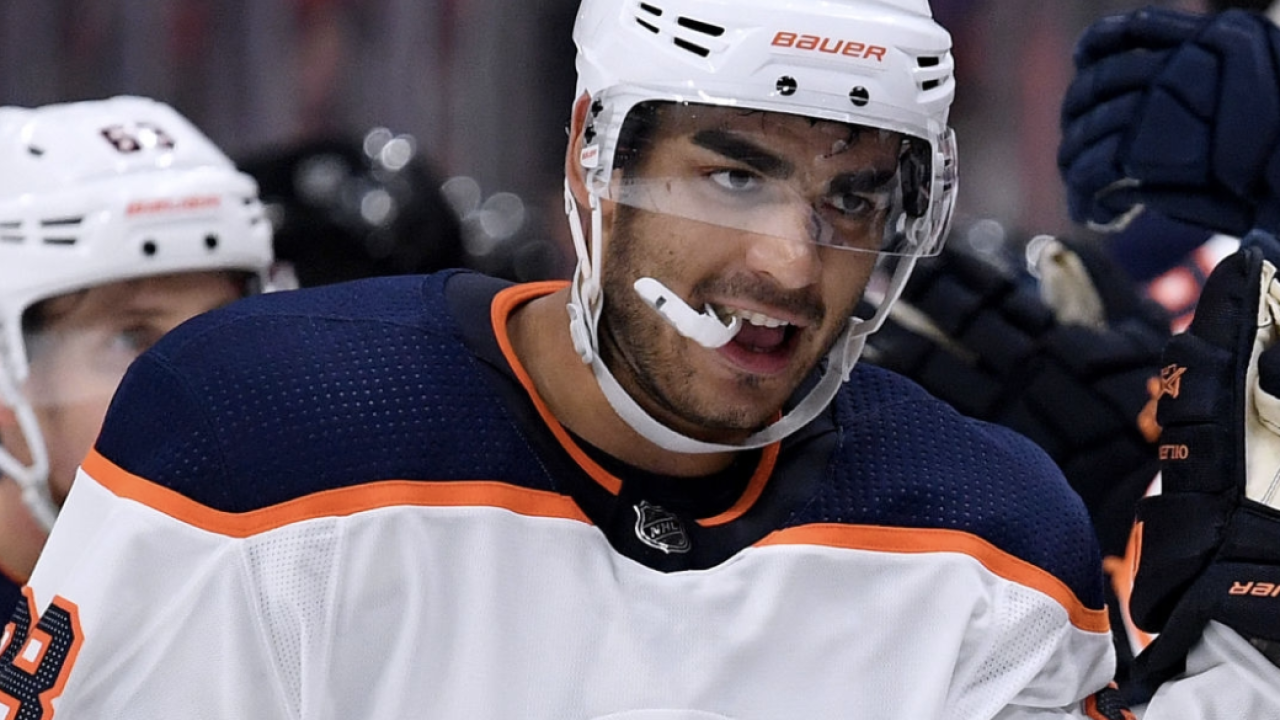 ANAHEIM, Calif. (AP) — Sonny Milano had an ideal debut with the Anaheim Ducks.

Milano netted the winning goal in overtime and finished with two goals, leading the Ducks to a 4-3 win over the Edmonton Oilers on Tuesday night.

Milano became the 10th player in NHL history to score an overtime goal in their first game with a franchise.

Nicolas Deslauriers and Adam Henrique also scored for the Ducks, who snapped a five-game losing streak. Anaheim has earned a point in consecutive games after losing in overtime to the Golden Knights on Sunday.

John Gibson had 29 saves for the Ducks, who never trailed as Edmonton's top scoring threats Connor McDavid and Leon Draisaitl were held without a shot on goal over the first two periods.

Tyler Ennis, Draisaitl and Andres Athanasiou scored for the Oilers. Mike Smith had 17 saves on 21 shots for the Oilers. Edmonton has a key Pacific Division game on the road Wednesday against the first-place Vegas Golden Knights.

Milano’s winner came at 2:05 of overtime, when he scored from just in front of Smith.

Henrique was originally in front of Smith with Milano on the wing, but the players quickly switched places. The puck immediately went to Henrique on the wing and he put a firm pass right on Milano’s stick for the winner. Milano, a former 2014 first-round draft pick, was acquired Monday in a trade with the Columbus Blue Jackets.

“We had a set play that didn’t work out, but we went with our gut there,” said Milano who had five goals in 46 games with the Blue Jackets this season. “Henrique told me to switch out and he gave me a good pass. I just tapped it in.”

Get the Sports newsletter in your inbox.Sports news, no matter the season. Stop by for the scores, stay for the stories.

Delivery: DailyYour EmailThe Oilers have now lost three of their past four games (1-1-2) as they fight for playoff positioning.

“We are not in a position where we should be squandering (points),” Oilers head coach Dave Tippett said. “We should be paying well and getting points, so that’s the frustrating part.”

Milano gave the Ducks a 1-0 lead 5:46 into the game when he forced a turnover in the Oilers’ zone and pushed the puck toward the goal. He was able to chase it down and poked it to the left side of the net, past Smith.

“Obviously, you see his speed and skill and it can be a difference maker out there so it was nice to have that injected in the lineup,” Henrique said of his new teammate. “It was great to see him get on the score sheet (early) and it probably took some of the nerves away there.”

Deslauriers made it 2-0 at 13:12 of the opening period when he scored from just in front of the Oilers' goal after taking a perfect pass from the left corner from Jacob Larsson. It was Deslauriers’ fourth of the season.

The Oilers didn’t score their first goal until the 9:09 mark of the second period, when Athanasiou fed a pass to Ennis in front of the Ducks’ goal. McDavid earned a secondary assist on the goal, Ennis’ 15th. Athanasiou was acquired Monday in a trade with the Detroit Red Wings.

Draisaitl tied the score 2-all at 4:23 of the third period when he fired a shot from the right circle off a pass from Ryan Nugent-Hopkins. It was Draisaitl’s 37th goal of the season. It was also the Oilers’ 55th power-play goal of the season with Draisaitl earning a point on 40 of them.

Henrique gave the Ducks a brief 3-2 lead at 12:33 of the third period when he took a pass from Danton Heinen in the slot, made a pair of moves and put the puck past Smith for his 24th of the season. Heinen was acquired in a trade from the Boston Bruins on Monday.

In addition to Milano and Heinen, three other Ducks were making their debut with the team following the recent flurry or trades: left wing Andrew Agozzino and defensemen Christian Djoos and Matt Irwin.

“All those guys coming in, I’m sure it was an exciting day for them, but you never know what you’re going to get when you plug five guys into a lineup,” Ducks head coach Dallas Eakins said. “Obviously, Sonny coming in and scoring early certainly bodes well for his confidence, that’s for sure.”

The Oilers tied it 3-3 less than three minutes later when Athanasiou scored his 11th of the season and first with the Oilers off a pass from Ennis. In addition to Athanasiou, Ennis and defenseman Mike Green were making their debut for the Oilers.

“I mean (it was) obviously not a good enough start,” said McDavid, who finished with three assists and two shots. "We just weren’t ready to go. A couple of new faces in the lineup ... I’m not sure what it was. I liked our will to battle back. … That’s a big point for us.”

NOTES: Oilers winger Kailer Yamamoto was a scratch with an ankle injury that occurred in Sunday’s victory over the Los Angeles Kings. Yamamoto, a former first-round draft pick in 2017, has nine goals and 12 assists in 21 games. Edmonton recalled forward Markus Granlund from Bakersfield in the AHL. … The Ducks made a number of moves out of consideration for the playoff chase of their AHL affiliate San Diego. Left wing Max Jones, right wing Kiefer Sherwood, center Sam Steele and Djoos all were reassigned then immediately recalled back to the Ducks in order to make them eligible the AHL playoffs. Right wing Troy Terry and defenseman Brendan Guhle also were reassigned to San Diego but not immediately recalled. … New Ducks center David Backes, acquired in a trade with the Boston Bruins on Friday, took to the ice for the first time with his new team Tuesday but there is no timetable set for his Anaheim debut.

Oilers: At Vegas on Wednesday to end a three-game trip.

Ducks: At home against the Pittsburgh Penguins on Friday in the fifth game of a six-game homestand.