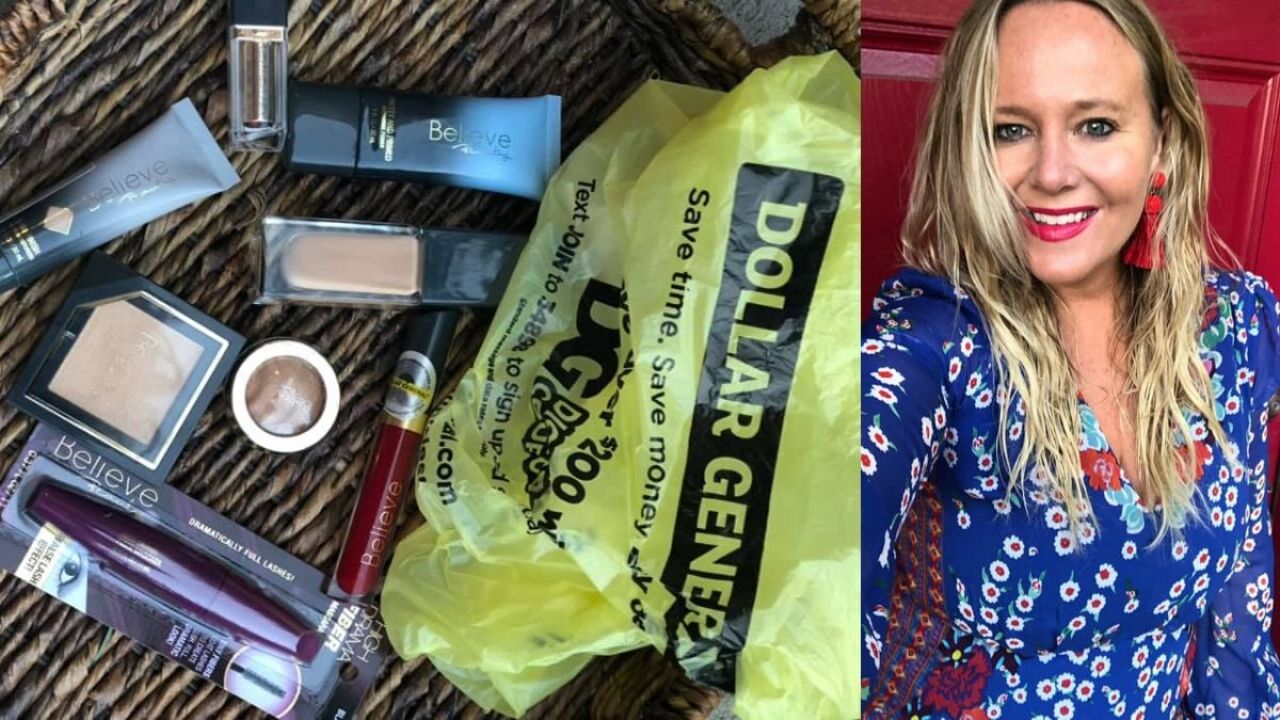 My first foray into dollar store makeup was a few months back. My mom mentioned that she had been buying eyeliner at Dollar Tree for a buck and that it worked “just fine, thank you very much.” This piqued my interest because I was regularly dropping $20 on eyeliner at a beauty store.

Turns out, Mom knows best and the Dollar Tree eyeliner did a mighty fine job. No, it doesn’t glide on as smoothly as the more expensive liner, but for a casual makeup gal like myself, it sufficed and has saved me some money.

So, when I heard that another dollar store, Dollar General, had a makeup line of its own, I was game to test it out.

Would it feel like the glossy pretend makeup of my childhood? Would it surprise me like the cheap eyeliner did? Here, I’ll tell you the good and the bad (and also the ugly!) about Dollar General’s makeup line, Believe Beauty.

A beauty enthusiast, I am not. But that’s probably why I was game to do my makeup with cheap products for a few weeks and even go on a first date — relying on nothing but Dollar General makeup.

To be honest, though, I have no idea how to apply and blend eyeshadow and I think contouring sounds more like a magic trick, but I am a sucker for bold lip colors and I do swear by this mascara stamping trick that makes your eyes look bigger.

What I’m getting at: Hi, I’m not very good at this whole makeup thing, and I’m going to do my best with very cheap products.

One more disclaimer: The Dollar General makeup does not actually cost a mere dollar. In some cases, I found the prices to be comparable to drugstore brands. Also, some of the Dollar General products (like the nail polish) came in small packages.

You can buy most of the Dollar General products online here, but some of the beauty goods are only available in store.

Here’s What I Bought

For just under $40, I brought home a pretty big haul and enough makeup for my day-to-day routine, with a couple of “what is this?!” wild card items.

Here’s what was in my haul:

I started by priming my face with the hydrating primer, which was a blue-tinted lotion. It gave me a subtle shimmer and some moisture, and — spoiler alert — this ended up being my favorite of the dollar store beauty products.

Next up was the foundation, which felt a little too thick and cakey so I added a dab of Cetaphil face lotion to the dollop of foundation so it would spread easier. Hold on, am I a beauty blogger now?

The mascara took several swipes before any noticeable color started to show up on my blond, nearly invisible lashes and I used a dab of the eye shadow. I loved how light the eye shadow feels.

I added some highlighter to the top of my chubby cheeks because I’m pretty much a makeup artist now and I’m going to trick people into thinking I have the bone structure of the Hollywood elite.

Then, something bad happened. I smothered the tinted moisturizer on my face and all of a sudden I was very shimmery. Like my face looked like a Christmas ornament dipped in Tinkerbell’s fairy dust.

So, I wiped everything off and started over, even though I was then running late to meet my girlfriends for a happy hour. I swiped on the lipstick and, surprisingly, it was a very bold pink, but I’m here for it.

Dollar Store makeup, take two. I had a date and wanted to soften up this look a little bit.

Obviously, I’d trashed the highlighting moisturizer glow stick thing. So, I used the actual highlighter to add a more subtle glow to the bridge of my nose and the tops of my cheeks.

I also used just used a dab of the pink lipstick this time around and then added a top layer of the gloss, coincidentally called “First Date,” for a more subtle pink lip.

Finally, for a third trial, I gave the Dollar General one more go, this time going heavier on the eye shadow and only using the lip gloss.

I actually loved some of the products! I’ve now stashed the foundation in my travel makeup bag as a back-up to the NARS brand that I usually use. I have also been using the hydrating primer before applying makeup.

But beyond the highlighting moisturizer disaster, there are some drawbacks with the budget makeup brand. You don’t get to test the makeup as you would at the beauty counter in a department store or at Sephora.

Also, I’d like to know more about the ingredients that are actually in the products, as safety concerns have been mounting about makeup ingredients.

Still, if you’re looking to try out a new lip color and don’t want to splurge, or if you like to keep some travel-sized beauty products in your suitcase, I think the Dollar General makeup products can do the trick.