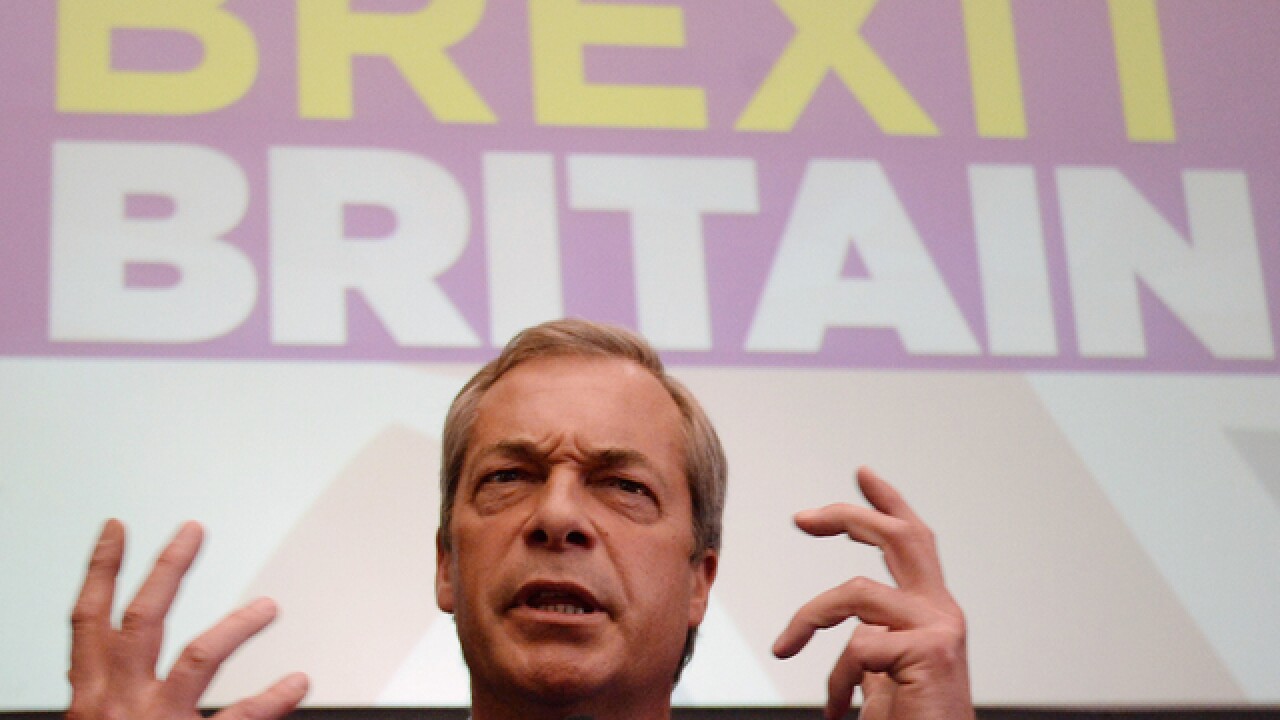 Stefan Rousseau
<p>United Kingdom Independence Party leader, Nigel Farage, announces he is resigning as party leader during a speech at The Emmanuel Centre in London, Monday July 4, 2016. Farage was instrumental in the campaign to have Britain leave the EU trading bloc, championing the issue of immigration. (Stefan Rousseau/PA via AP)</p>

LONDON (AP) — The head of the U.K. Independence Party, Nigel Farage, resigned Monday as party leader, arguing that he's achieved his political ambition of having Britain leave the European Union.

Farage was instrumental in the campaign to have Britain leave the trading bloc, championing the issue of immigration. A criticized campaign poster featuring thousands of migrants massed at the border alongside the words "Breaking Point," typified fears that fueled some Brits' decision to vote for a British exit, or Brexit.

"The victory for the 'leave' side in the referendum means that my political ambition has been achieved," Farage said. "I came into this struggle from business because I wanted us to be a self-governing nation, not to become a career politician."

Farage told reporters he would retain his seat in the European Parliament to see out the negotiations for Britain's exit from the EU following the country's June 23 vote to leave the bloc. He defended his taunting of other lawmakers in the chamber last week, arguing he wanted Britain's voice to be heard.

Political turmoil has gripped the country since the vote. Prime Minister David Cameron, who campaigned in favor of "remain," has announced he will resign following the loss. A leadership contest is underway to replace him, but without the early favorite, former London Mayor Boris Johnson. The opposition Labour Party has troubles of its own, with leader Jeremy Corbyn clinging to office despite having lost a no confidence vote by his party's lawmakers.

"Whilst we will now leave the European Union the terms of our withdrawal are unclear," Farage said of his decision. "If there is too much backsliding by the government and with the Labour Party detached from many of its voters, then UKIP's best days may be yet to come."

Earlier, Britain's Treasury chief announced plans to cut U.K. corporation tax to less than 15 percent to encourage companies to invest and ease business concerns about the country's vote to leave the EU.

Treasury chief George Osborne says the cut is meant to underscore that Britain is "still open for business," despite the referendum result. A cut of about 5 percentage points brings Britain in line with Ireland's 12.5 percent rate.

Osborne told the Financial Times it was time to "make the most of the hand we've been dealt." He is urging the Bank of England to use its powers to avoid "a contraction of credit in the economy."

Some businesses based in London are considering leaving for other cities like Dublin, Amsterdam, Frankfurt or Paris to benefit from the large EU common market.