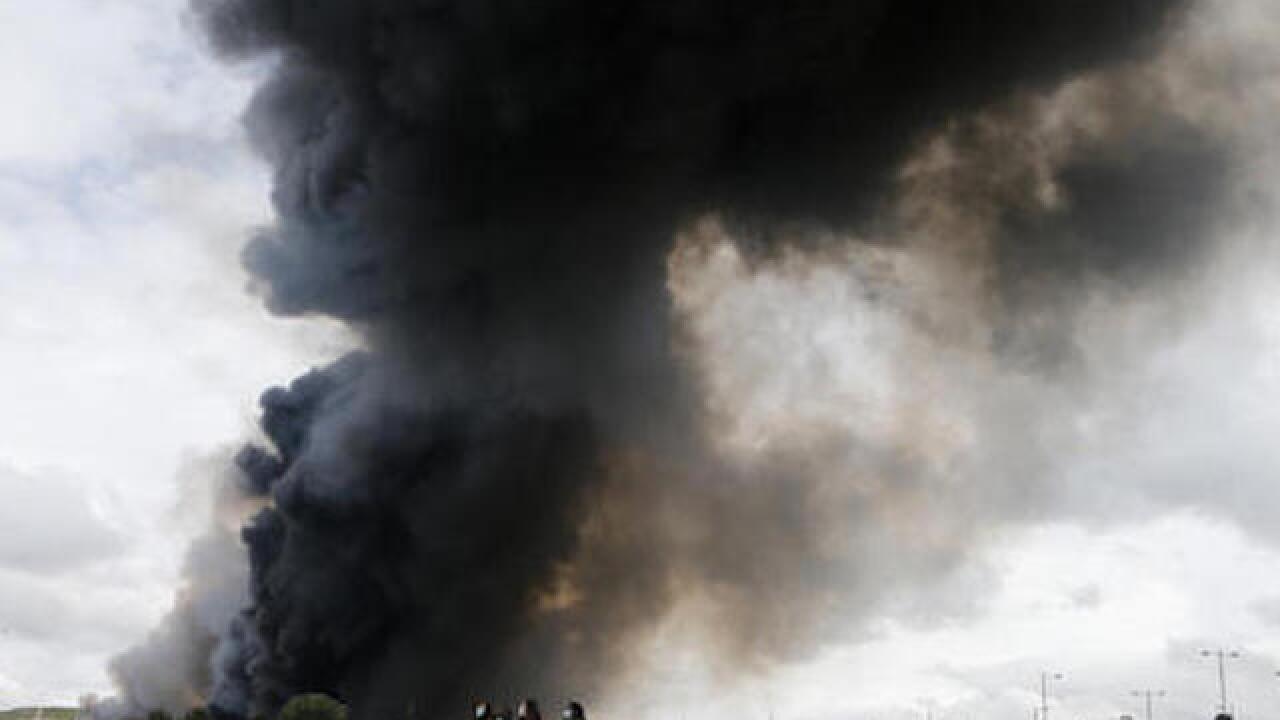 Copyright Associated Press
Paul White
<p>Four women walk with masks in front of billowing black smoke from a huge fire in Sesena, central Spain, Friday, May 13, 2016. A massive fire is raging at a sprawling tire dump in a town near Madrid, sending a spectacular cloud of thick black smoke into the air that's visible for at least 30 kilometers (20 miles). Ten teams of firefighters are trying to put out the blaze at the tire dump in the town of Sesena, still raging more than 10 hours after it started. (AP Photo/Paul White)</p>

About 8,000 apartment dwellers had already left their homes in Sesena, a central town near Madrid, as the thick smoke poured out from the fire that started before dawn, the regional government of Castilla-La Mancha announced.

It said ambulances were being sent to the complex to evacuate people with health problems who could not leave on their own.

The order was issued because weather conditions were expected to change overnight, raising the risk that the smoke could inundate the apartment complex even as firefighters reported progress in trying to bring the fire under control. The dump is less than 1 kilometer (.6 miles) from the complex.

About 70 percent of the tires had burned by Friday night but authorities did not know when the blaze would be completely extinguished, said Francisco Martinez, the regional government's environmental minister.

No injuries were reported because of the fire, which authorities believe was intentionally set. The smoke plume was visible from Madrid, more than 30 kilometers (20 miles) away. The sprawling tire dump is thought to be Europe's largest, Sesena Mayor Carlos Velazquez told the Cadena Ser radio station.

Two water-carrying helicopters doused the vast expanse of tires throughout the day.

Madrid firefighting inspector Luis Villarroel said firebreaks that were created helped restrict the blaze to one active front. By Friday afternoon, the smoke had lost much of its density.

Classes at one school were canceled and authorities urged drivers to keep their windows closed. Two major highways pass close to Sesena and one was closed to traffic for three hours before being reopened.

Known locally as the "tire cemetery," it was declared illegal in 2003 because it lacked proper permits. Authorities since then have been trying to figure out what to do about it.