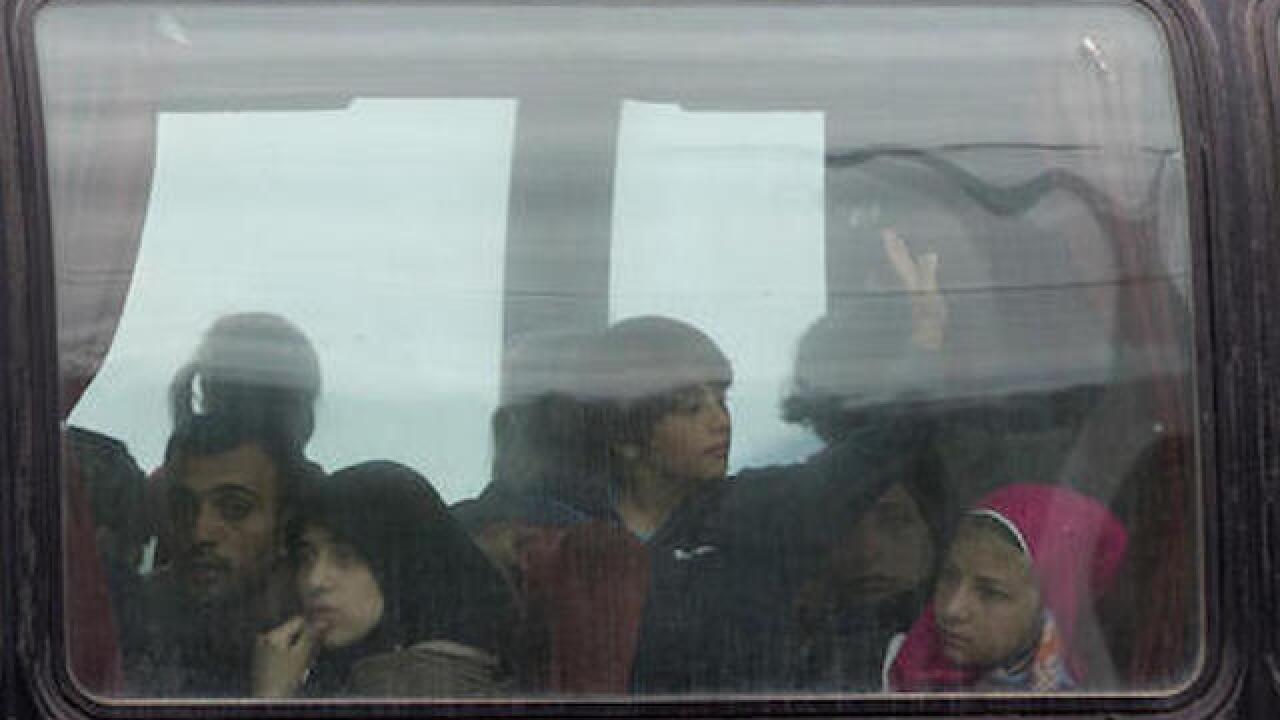 Copyright Associated Press
Darko Bandic
<p>Migrants ride on a bus to be transferred elsewhere, near informal camp in Idomeni, Greece, Wednesday, May 25, 2016. Refugees and other migrants were boarding buses heading to organized camps Monday on the second day of an operation to evacuate the sprawling Idomeni refugee camp on the Greek-Macedonian border. (AP Photo/Darko Bandic)</p>

IDOMENI, Greece (AP) — Refugees and other migrants were boarding buses Wednesday on the second day of an operation to evacuate the sprawling, makeshift Idomeni refugee camp on the Greek-Macedonian border.

More than 700 police were deployed but no violence was reported in the push that began at dawn Tuesday in the camp of more than 8,000 people. Journalists have been banned from the site.

Authorities said about 2,000 people moved out on the first day, leaving just over 6,000 in Idomeni early Wednesday, and by noon at least 300 more had left. The camp's evacuation is expected to last several days, with residents being transported to newly built shelters set up by local authorities and the army.

"It was a calm night," said Vicky Markolefa, spokeswoman for the medical aid group Doctors Without Borders. "What we are seeing is that people are leaving voluntarily. There has been no problem."

The evacuation of Idomeni has dashed the dreams of thousands who had been camping there for months in the hopes of eventually being able to cross over the border and continue toward Europe's more prosperous heartland.

But Balkan and European borders have been closed to refugees since March, in an attempt to stem the flow of hundreds of thousands who left Turkey, crossed the sea to Greek islands, then headed north for wealthy European countries.

The border closures have stranded more than 54,000 people in Greece.

During the evacuation's first day, some staying at Idomeni left on foot to avoid being transported to official camps.

"The police were everywhere and it was quite scary," said Emad Hawary, a 50-year-old Syrian who walked out of the camp with his wife and two daughters, seeking refuge at a nearby gas station. "We don't want to go to a shelter. It's just another field."

Hawary said his family was still determined to reach their son, who is already in Germany.

Ahmad Khayata, 26, a student from Aleppo, Syria, left Idomeni on foot Tuesday and spent the night in a tent outside a highway hotel. He plans to pay a smuggler 800 euros ($890) to get him to the Serbian capital of Belgrade, another step in his goal of eventually reaching Germany.

"If I go to a camp, nobody knows how long I will be there," he told The Associated Press. "Some people say it will be for a year, others for six months. At Idomeni, I spent three months just eating and sleeping, but I want to work."