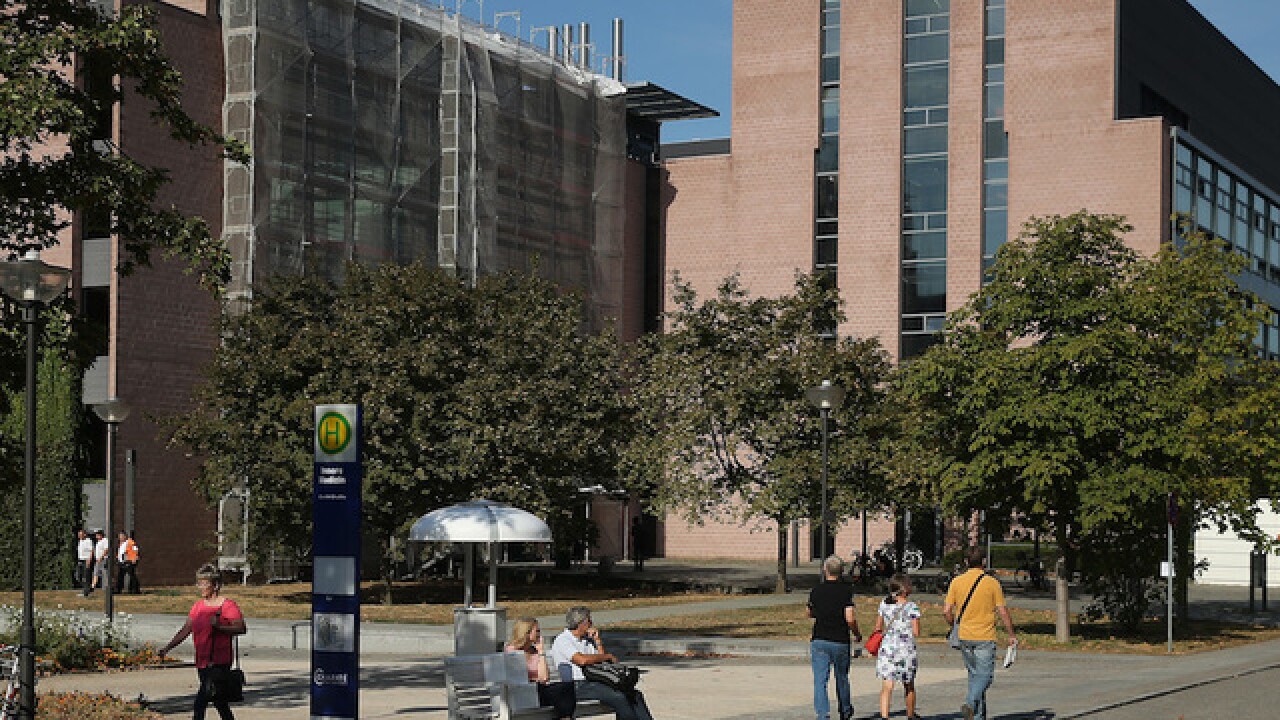 Image copyright 2018 Getty Images. All rights reserved. This material may not be published, broadcast, rewritten, or redistributed.
Sean Gallup
<p>People walk on the campus of Charite Hospital, where Pyotr Verzilov is being treated, on September 18, 2018 in Berlin, Germany. Charite doctors confirmed at a press confeence today that there is a "high plausibility" that Verzilov, a member of the Russian activist group, Pussy Riot, was poisoned. Verzilov fell ill following a visit to a Moscow court one week ago.</p>

German doctors say there is a "high plausibility" that a member of the Russian protest group Pussy Riot, who was taken ill in Russia last week, was poisoned.

Doctors have been unable to determine the nature of the substance or the source, he said, adding that while the activist remains in intensive care, his life is no longer in danger.

"The information we currently have... shows a high plausibility that poisoning has taken place here," Eckardt said. "To turn it around, so far we have no indication that there might be another explanation for his state."

The announcement adds weight to claims made by other Pussy Riot members on Thursday that Verzilov was poisoned in Russia. The Russian punk band -- known for obscuring their identities with colorful balaclava-style masks -- is an outspoken critic of the Putin government.

Verzilov, who is also the husband of prominent band member Nadezhda Tolokonnikova, flew into Berlin on Saturday, according to Germany's Cinema for Peace Foundation, a non-profit humanitarian group that has previously advocated for Pussy Riot and which organized the flight.

He was admitted to the Charite Hospital with symptoms of intoxication and in a state of confusion, the hospital said in a statement Tuesday.

The hospital's Chief Executive Office, Dr. Karl Max Einhäupl, said in the statement that Verzilov's condition had since improved significantly and that doctors are "confident that a complete cure will come."

Doctors believe that Verzilov was poisoned almost a week ago. They are working with toxicologists in an effort to identify the substance used, the statement said.

Verzilov is a joint Russia-Canada citizen, and on Thursday Canadian Prime Minister Justin Trudeau said that the situation was of concern, "particularly given actions of recent months by the Russians in the UK."

Trudeau appeared to be referring to the alleged Russian poisoning of former spy Sergei Skripal and his daughter Yulia in the southern English city of Salisbury in March. CNN asked the Russian foreign ministry for comment on Trudeau's comments but has yet to receive a reply.

It was later determined that they had been poisoned with a powerful nerve agent called Novichok, which British investigators tied to the Russian government. Russia has denied the claims.

Verzilov was one of four protesters dressed as police officers who rushed the field during the 2018 World Cup final in Moscow in July.

In a statement, Pussy Riot claimed responsibility for the demonstration and called for political prisoners to be freed, for the arrests of opposition protesters to cease, and for the jailing of citizens over their social media activity to end.

"The attack (last week) is regarded as revenge for appearing in the World Cup final to support human rights in Russia," said the Cinema for Peace Foundation in a statement Sunday.

Nearly six years ago, three of Pussy Riot's members -- Tolokonnikova, Maria Alyokhina and Yekaterina Samutsevich -- were charged with hooliganism and sentenced to two years in prison for performing an anti-Putin protest song called "Punk Prayer" at Christ the Savior Cathedral in Moscow.

One of them, Samutsevich, had her sentence suspended on appeal, but the others served their sentences until being released in December 2013.

They have continued to be critical of Putin and his government in subsequent years. On their release, they founded an independent media outlet that advocates for political prisoners, including through "immersive" theater projects.