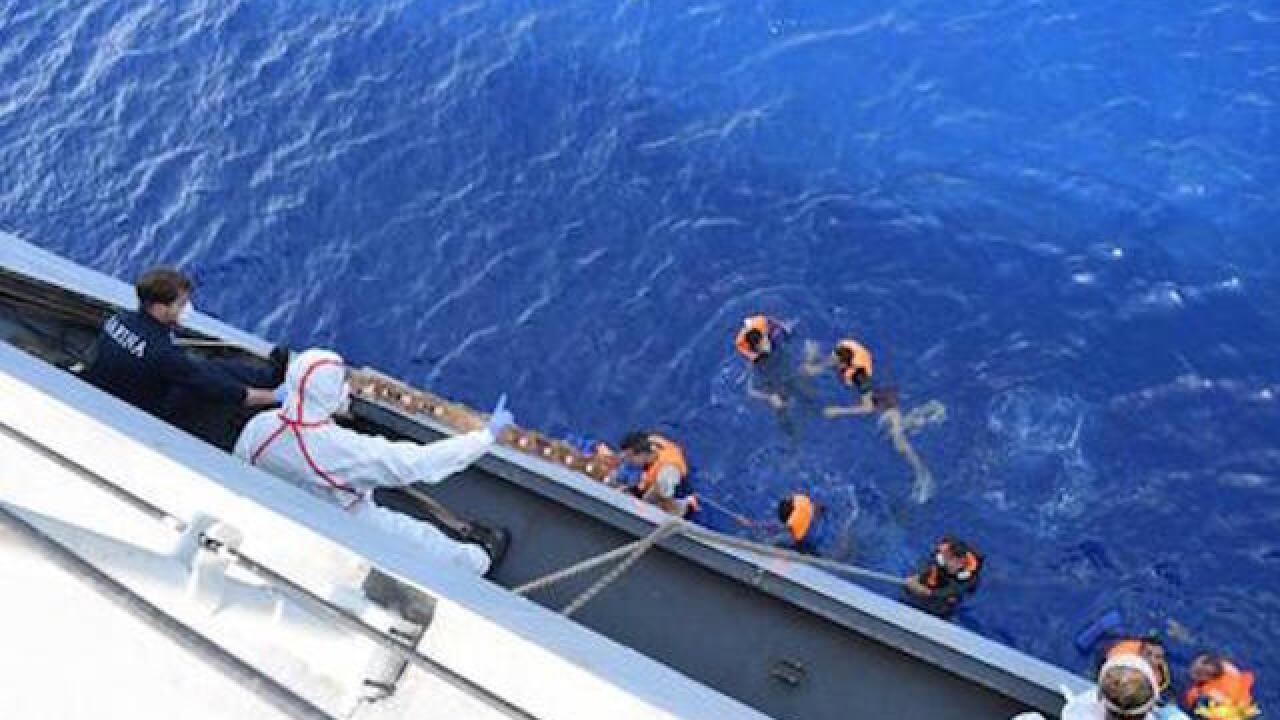 Copyright Associated Press
<p>People are helped to board an Italian Navy ship after a boat overturned off the Libyan coast, Wednesday, May 25, 2016. The Italian navy says it has recovered 7 bodies from the overturned migrant ship off the coast of Libya. Another 500 migrants who on board were rescued safely. A statement from the Italian navy Wednesday says the Bettica patrol ship was responding to a migrant ship in distress when it flipped, sending migrants into the sea. (Marina Militare via AP Photo)</p>

ROME (AP) — A migrant boat sank off Libya's coast Thursday, with some 20 bodies spotted in the sea. Officials said 88 people had been rescued.

The Libyan coast guard also reported finding four bodies as well as also two empty boats, suggesting there could be many more victims as smugglers working amid Libya's lawlessness take advantage of calm seas and warm weather to pack people into unseaworthy boats for the trip to Europe.

Photos tweeted by the European Union's Mediterranean mission showed a bright blue dinghy submerged under the weight of migrants waving their arms to the EU aircraft hoping for rescue. None had a life jacket.

Two Italian coast guard vessels and the Spanish frigate the Reina Sofia intervened at the scene, said Navy Lt. Rino Gentile, an EU spokesman. The scene was some 30 miles (50 kilometers) off Libya's coast.

Gentile said 77 people had been rescued. Italian Coast Guard. Cmdr. Cosimo Nicastro gave the figure of 88 rescued; the discrepancy couldn't be immediately explained. Gentile said about 20 bodies had been spotted in the sea.

In other rescues, a Libyan navy spokesman said a total of 766 migrants were rescued by the Libyan coast guard on Thursday.

Col. Ayoub Gassim said they were found in two groups: one of 550 near the western coastal city of Sabratha and the second of 216 off Zwara.

He also said that two boats were found empty in the area between the two cities, and only four bodies were retrieved while the rest of its migrants are feared dead. He said he had no details about the empty boats.

Nicastro said there were 20 operations underway on Thursday alone, with 1,000 people rescued so far. During busy days, it is not unusual for crews to rescue as many as 2,500 people in a single day.

On Wednesday, the Italian navy released dramatic images of another rescue of passengers of a huge smuggling ship that overturned off Libya, with migrants clinging to the ship's sides and being thrown into the sea. In that operation, the navy initially said seven bodies had been recovered but then lowered the number to five.

Before that incident, the International Organization for Migration had said that only 13 people had drowned so far in the month of May, compared with 95 in May last year and 330 in May 2014, which it said "indicates that migrant fatalities may at last be declining" thanks to beefed-up coast guard monitoring along the North African coast. However, weather conditions appear to have led to an increase in the number of migrants risking the crossing.