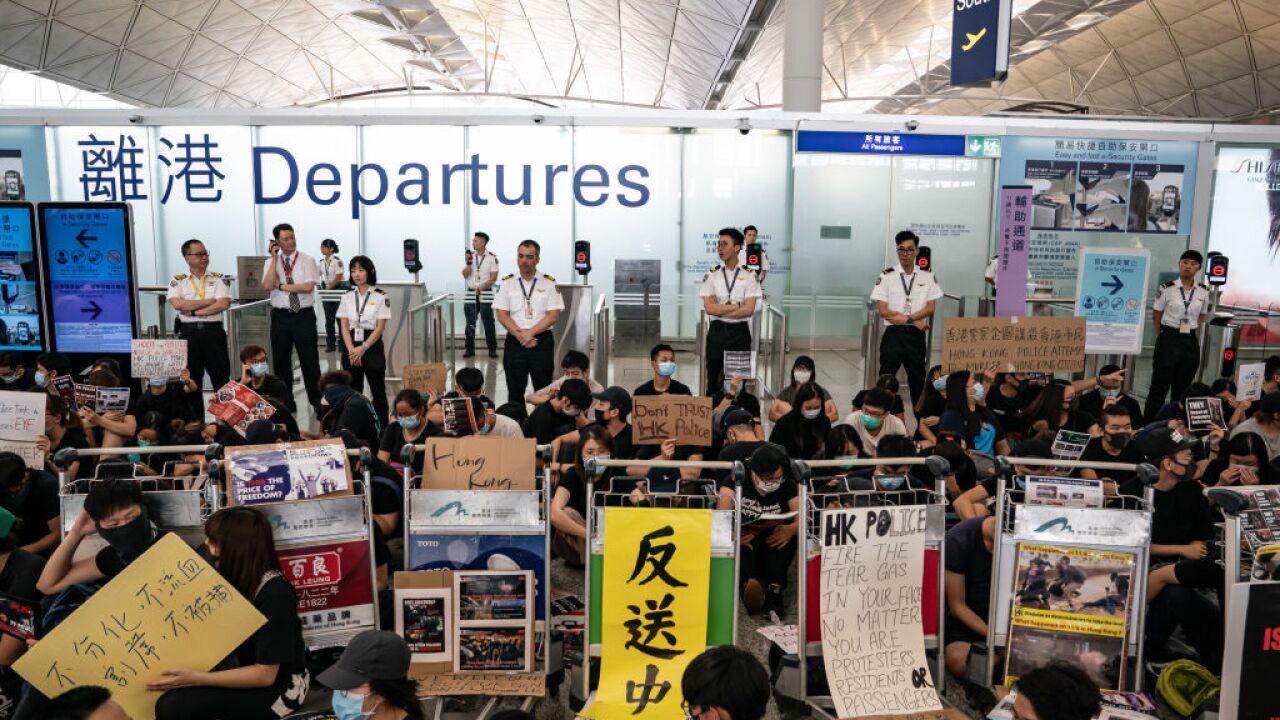 Hong Kong's airport has been thrown into chaos for the second day in a row, with all check-ins suspended and dozens of outgoing flights canceled.

Hundreds of protesters blocked security gates at one of the world's largest commuter hubs on Tuesday, with passengers struggling to get through the demonstrators to their gates.

At 5 p.m. Hong Kong's Airport Authority announced that all check-in services would be suspended for another night, due to terminal operations being "seriously disrupted."

"Members of the public are advised not to come to the airport," the authority said in a statement. All outbound flights which have not yet completed the check-in process have been canceled.

Inbound flights will continue to operate as scheduled.

It followed a night of chaos at the airport Monday when dozens of outgoing flights were canceled after thousands of protesters arrived to protest police violence during protests on Sunday.

Many passengers were left stranded with little information as to their situation with some even spending the night in the airport on the chance they would get a flight out.

On Tuesday morning, Hong Kong's Chief Executive Carrie Lam warned that the city was on "the brink of no return" and said it would take a long time to recover from the recent mass demonstrations.

"The only thing we have to do is to go against violence, and rebuild the city," said Lam.

In an unusually strong statement, Hong Kong company Swire Pacific, who own flagship airline Cathay Pacific, have called for the "restoration of law and order" in the city.

"We must act now to stop the violence and preserve the stability, peace and prosperity of Hong Kong," the statement said.

Last year, Hong Kong's airport handled 74.7 million passengers -- an average of about 205,000 per day. But on Monday, the airport was brought to a standstill as protesters occupied parts of the airport.

Confused tourists were left unsure of what was happening as shops, restaurants and check-in counters closed. Trains and buses heading into the city were packed with people, and the one available information desk was staffed by frazzled looking workers.

After the numbers of protesters dwindled overnight, more began to pour into the airport from early on Tuesday morning, chanting slogans and putting up signs.

Disagreements occasionally broke out between passengers and protesters. Two men -- one of whom was wearing a cap emblazoned with a Chinese flag -- were seen arguing with protesters in the arrivals hall, before being ushered away by security as protesters cheered.

Another passenger -- who appeared to be from mainland China -- told protesters that they were causing inconvenience for others.

After the widespread cancellations were announced Tuesday, passengers who had been preparing to head to the airport were frustrated and confused.

Waiting at Hong Kong subway station, a 33-year-old French man who lives in Hong Kong, Loic, said that he didn't know if his flight was canceled. "I don't know what I can do. Maybe I can go to Shenzhen," he said.

But despite the days of disruption, some locals were still supportive of the protesters. "It touched me to see Hong Kong like this, I'm not angry," a 31-year-old passenger, who asked not to be identified, told CNN. "I still support them."

Why Hong Kong is protesting

Hong Kong's protest movement kicked off in earnest in June, sparked by a bill that would allow extradition to China.

Since then, the protests have expanded into something bigger, with protesters now demanding greater democracy and an inquiry into alleged police brutality.

The protest movement -- that on Sunday passed its 10th straight weekend of demonstrations -- has seen protesters and police clash numerous times, with police firing multiple rounds of tear gas.

Beijing, meanwhile, has criticized the actions of the protesters. On Monday, a top Chinese official said the protests "had begun to show signs of terrorism."