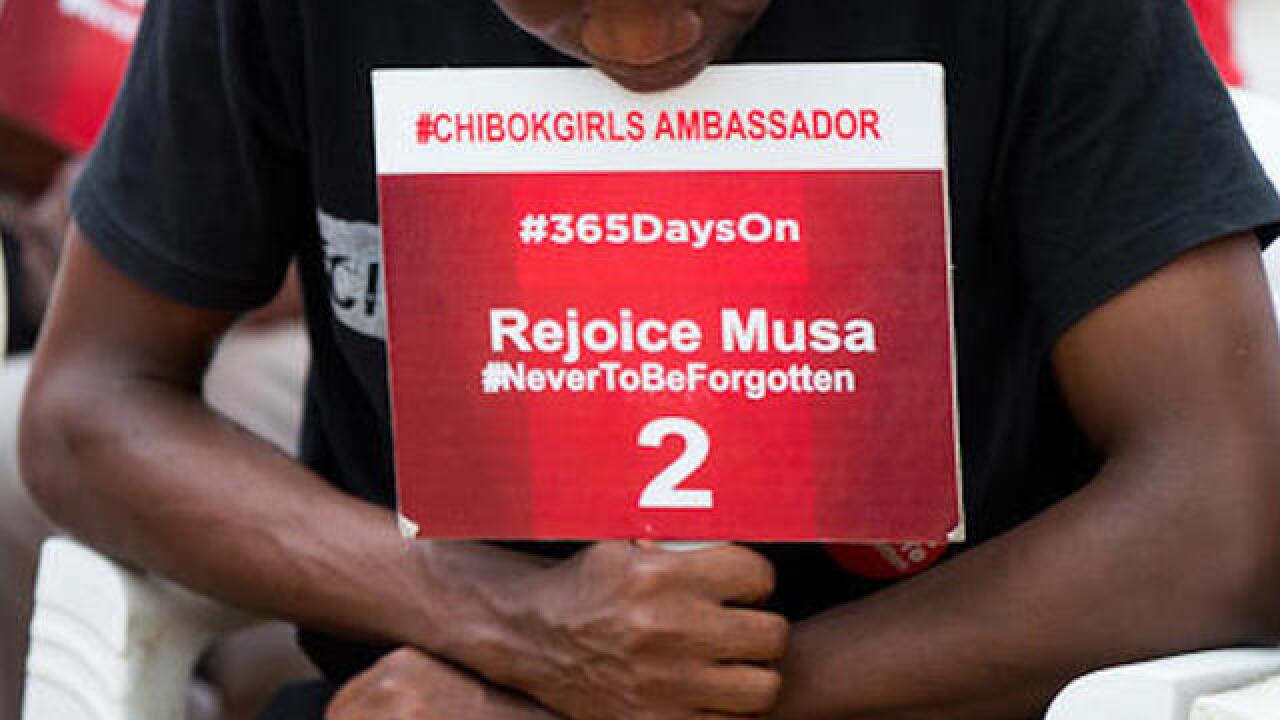 Copyright Associated Press
Andrew Harnik
<p>A man holds a sign with a name of a missing girl as U.S. Ambassador to the United Nations Samantha Power attends a Bring Back Our Girls vigil in Abuja, Nigeria, Thursday, April 21, 2016, which, two years after Boko Haram abducted the girls from their school, is still held daily. A total of 219 girls remain missing, and Power said she couldn't imagine the frustration of the families. Power is traveling to Cameroon, Chad, and Nigeria to highlight the growing threat Boko Haram poses to the Lake Chad Basin region. (AP Photo/Andrew Harnik)</p>

LAGOS, Nigeria (AP) — Nigerian soldiers have found one of the schoolgirls kidnapped by Boko Haram extremists from Chibok town, her uncle says, describing her as pregnant and traumatized but otherwise fine.

Amina Ali Nkeki is the first of the 219 Chibok girls to be freed since the mass abduction that grabbed attention around the world more than two years ago.

She was found wandering in the forest, uncle Yakubu Nkeki told The Associated Press. He said the 19-year-old — she was 17 when she was abducted — was brought to Chibok Tuesday night for her identity to be verified and to be reunited with her mother. Her father died while she was held captive, he said.

He said the soldiers then took the young woman away, apparently to a military camp in the town of Damboa.

Other Chibok girls may also have been rescued by soldiers hunting down Boko Haram in the remote northeastern Sambisa Forest on Tuesday night, said Chibok community leader Pogu Bitrus. He said he is working with officials to establish their identities.

Boko Haram Islamic extremists stormed and firebombed the Government Girls Secondary School at Chibok on April 14, 2014, and seized 276 girls who were preparing to write science exams. Dozens escaped in the first hours, but 219 remained missing.

The inability of Nigeria's government and military to rescue them led, in part, to the electoral defeat of President Goodluck Jonathan last year.

It's not known how many thousands of girls, boys and young women have been kidnapped by Boko Haram in a nearly 7-year-old insurgency that has killed some 20,000 people and spread across Nigeria's borders.

Nigeria's military has reported freeing thousands this year as they have forced the extremists from towns and into strongholds in the sprawling Sambisa Forest. Boko Haram has turned to soft targets using suicide bombers.