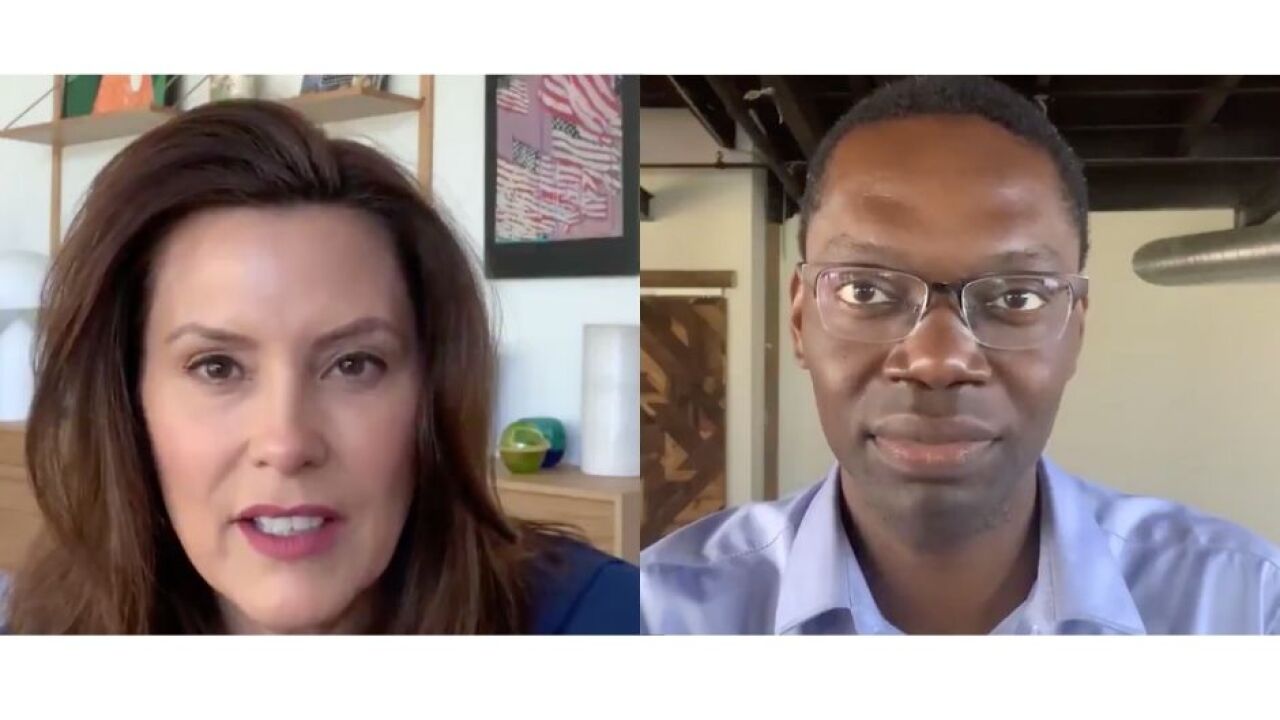 Gov. Gretchen Whitmer and Lt. Gov. Garlin Gilchrist in a video released on Twitter Sunday, addressed the civil unrest across the state due to ongoing protests against systemic injustices.

RELATED: Third day of protests planned in Detroit after killing of George Floyd

Michigan is just one of many states across the country prompted to hold demonstrations because of the killing of George Floyd in Minnesota and Ahmaud Arbery in Georgia, as well as Breonna Taylor in Kentucky.

To the good people of Michigan: we see you. We hear you. Your voice is what drives change now and always.

All of us must be the relief. We must organize. We must speak truth to power. We will get through this together. pic.twitter.com/ev9Yq092H5

Whitmer touched on the continuing pandemic and recent devastating floods in mid-Michigan, but focuses primarily on recent protests.

"I'm angry. Not at the peaceful demonstrators," Whitmer said. "I'm angry at the people who are abusing this pain to further their own agendas. Those that came into communities of color under the guise of support."

Sunday morning, Detroit police confirmed 84 people were arrested during Saturday night's protests in Downtown Detroit. Of that total, police say the majority were from metro Detroit and two who were arrested came from Tennessee and Ohio.

The protests were largely prompted by the death of George Floyd and the subsequent release of video from his May 25 arrest captured on video and shared on social media. The officer involved, Derek Chauvin, was arrested and charged with third-degree murder.

The other three officers on the scene, who have since been fired, have not yet been arrested or charged.

"His story. It is angering," Gilchrist said in response to Floyd's death. "It is exhausting. Too many black people and other people of color have experienced the brutality and suffocation pressed upon them by a system that has treated us as less than full human beings."

Across Michigan, demonstrations were held in downtown Detroit, Washtenaw County , Royal Oak, Southfield, and Grand Rapids over several days, with city mayors implementing curfews as a response to some violent protests.

Whitmer and Gilchrist urged residents to safely protest and follow local curfews, while also urging residents to vote for the change they desire.

"We must vote," Whitmer said. "The tone, the focus, the equity depends on who we put in positions of power."

Gilchrist adding that "the pain is real," for many across America and Michigan.

Protests continued in the metro Detroit area on Sunday, with the majority scheduled for late afternoon.