Retiring in your 30s? How the F.I.R.E. movement is helping people save 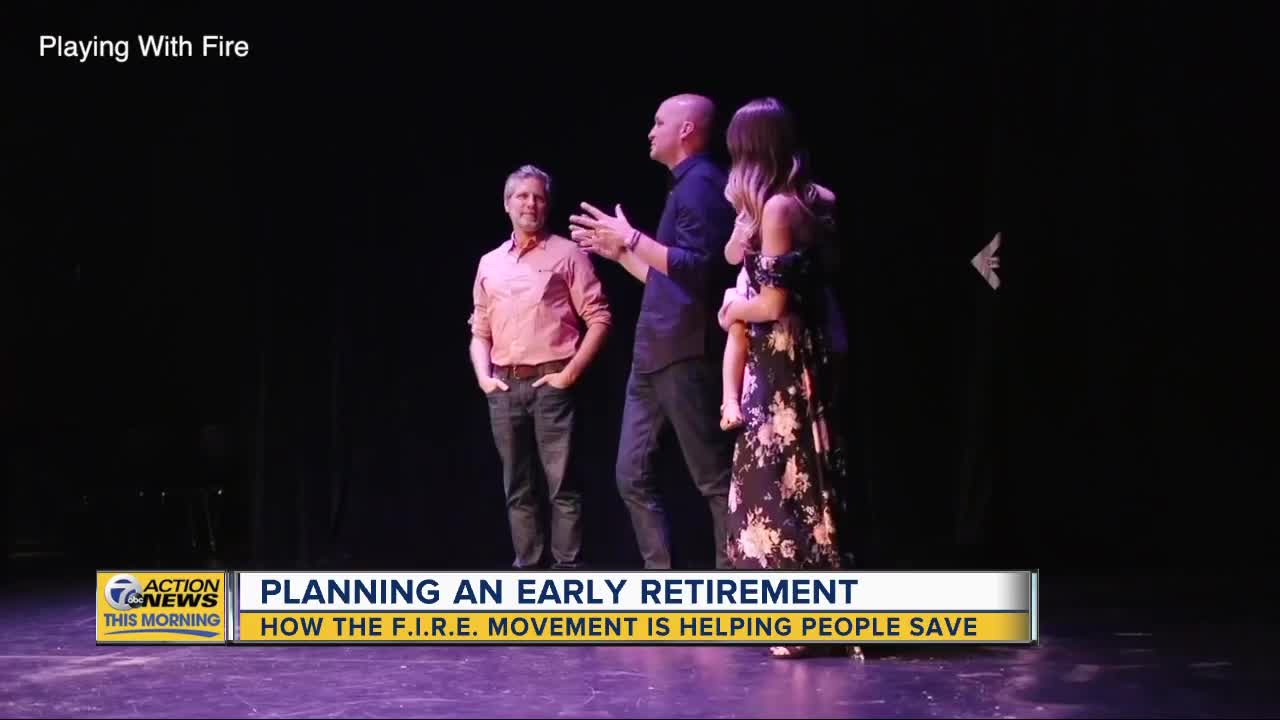 Planning an early retirement: How this movement is helping people save

Retiring in your 30s may sound like a dream, but some are on the path to live it.

There’s debate online among financial experts about whether the FIRE movement is a slam dunk financial plan or a dud — regardless, thousands are exploring the options.

FIRE stands for “Financial Independence, Retire Early.” The name is a little confusing, because not all followers of FIRE retire early. In fact, it’s about flexibility — the “financial independence.” The goal is to have freedom to pursue your goals and ambition — many cut back on what’s known as the big three: housing, vehicles and food.

“I have friends that think this financial independence is being frugal and cutting back on everything,” said Paul Prax, a recent convert. “They see me driving my older truck and and they’re like, ‘But you’re in pain,’ and I’m like, ‘I’m not, I’m trading this for something more.’”

Prax, an engineer, isn’t looking to retire early. However, when he and his wife looked at their financial situation they determined they wanted to focus on more than money. She had a passion for ice skating and realized she didn’t want to wait until she was retired to attempt her dream: professionally skating. They decided to sell their house, ditch a corporate lease and she took a year off from work. She’s currently training with Disney On Ice and is preparing to go on tour. Prax is searching for a duplex so they can rent the second half to add more flexibility to their new life.

“Seeing her in that element makes it worth it,” said Prax, who equated driving a junker to an easier path to an airline ticket to her next stop. “That’s where she shines. My old truck is my ticket to see her in Florida, New York or wherever. That’s a trade-off I’ll take.”

He’s hardly alone in the journey to financial flexibility. Scott Rieckens, the executive producer of Playing With Fire , is touring the country to sold-out shows teaching people about the FIRE movement.

In Detroit, there wasn’t a seat open for the showing of his new film — his book, a hot sell on Amazon.

“You start to realize that there’s this whole community of people trying to figure out a way to DIY their retirement,” said Rieckens. “They’ve actually found a way to do it where you can accelerate the time it takes to retire.

In his movie, Rieckens takes the plunge himself, the trailer shows him in an emotional scene walking away from his job having just quit. His journey led to him downsizing his home, going from a two-car family to a one-car home. The moves have paid off so far, and Rieckens notes that his outlook on money changed as he went through the steps. He and his wife now have open discussions about money, and the same people that once thought he was crazy are now bouncing ideas off of him — an interesting notion for a guy who said he would have avoided a spreadsheet several years ago.

“I think that’s where the magic lies,” said Rieckens, talking about how open he’s become with the discussion of money in his own home. “This gave us a way to have a conversation about our happiness and our goals. We could put our money to use, to make those things happen.”

FIRE is pretty simplistic at its core, but it leads to some big changes. The idea is to spend less than you earn and put the difference in low-fee investments — you can also find ways to turn your investments into something that works two purposes: a rental property can become an income stream, and it can double as a living space if it’s a duplex like Prax is exploring. The more frugal you are, the faster the savings pile up.

The social change is the big difference, behavior drives what FIRE actually looks like. People like Rieckens and Prax look at their life in terms of time spent rather than money spent — prioritizing what you want most.

“What is important to you?” asked Rieckens. “What are your goals and how do you achieve them? And here’s some strategies to get that done These small cuts, or big cuts, lead to drastic changes in the horizon.”