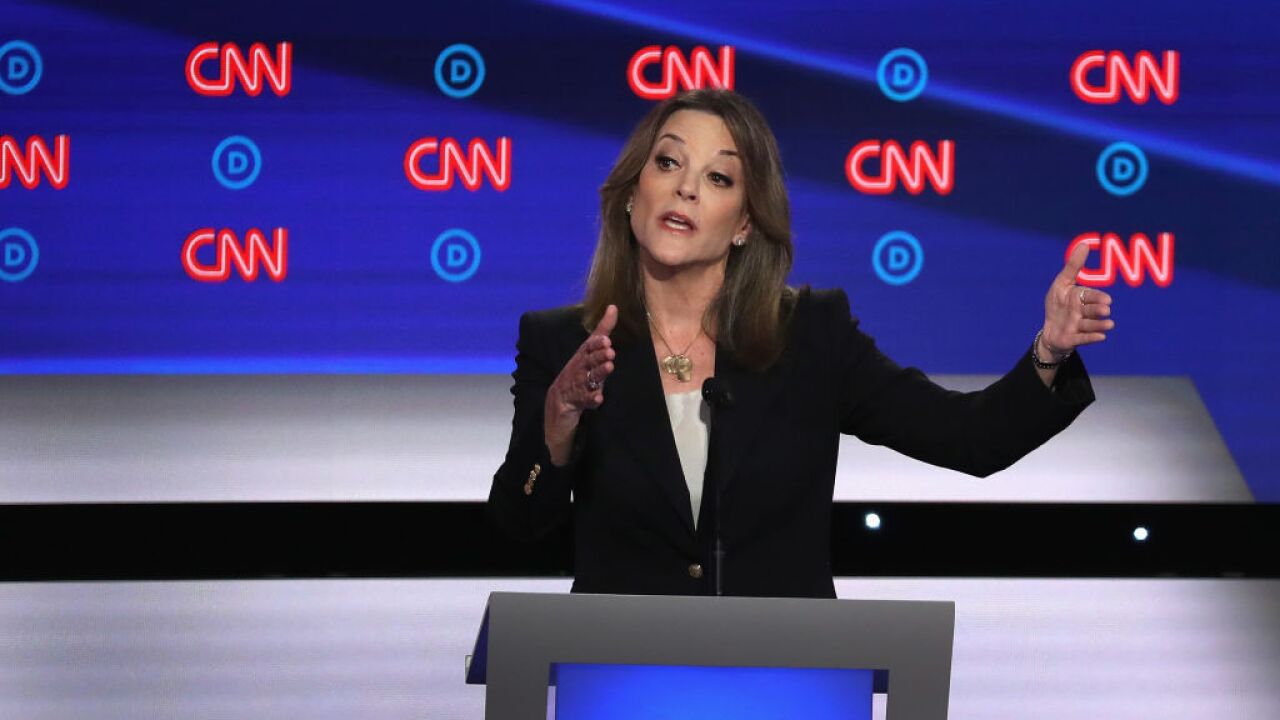 Bernie Sanders is calling for revolution. Marianne Williamson would rather see a psychic, "moral uprising."

The 67-year-old self-help author and spiritual adviser to Oprah Winfrey now vying for the Democratic presidential nomination doesn't sound or carry herself like a politician. Speaking in wandering streams of consciousness, Williamson has an arresting style and a lilt to her voice, as well as an accent that sounds vaguely aristocratic — or at least nothing like most people who hail from her native Houston.

But on Tuesday's opening night of back-to-back Detroit debates, Williamson showed that as long as she's in the race, she'll keep things interesting. And that while those long, winding declarations don't always make sense, they can occasionally produce powerful political moments.

Some of the loudest applause came when Williamson became the first of the 10 candidates on stage to evoke racism at length, calling it "part of the dark underbelly of American society."

"If you think any of this wonkiness is going to deal with dark psychic force of the collectivized hatred that this president is bringing up in this country, then I'm afraid that the Democrats are going to see some very dark days," Williamson said, adding that, if the party doesn't "start saying it, then why would those people feel that 'they're there for us,' and I feel like they won't vote for us, and Donald Trump will win."

Trump has put race at the forefront of his reelection campaign, condemning Democratic Rep. Elijah Cummings of Baltimore's majority-black district as a "disgusting, rat and rodent infested mess" and suggesting that four Democratic congresswomen of color "go back and help fix the totally broken and crime infested places from which they came," as if they weren't U.S. citizens.

That debate moment began a pattern of sorts, as Williamson continued to chide the other candidates for putting detailed policy over more ambitious pledges to cure the country's larger ills.

"I almost wonder why some of you are Democrats," she said later. "You seem to think there's something wrong about using the instruments of government to help people."

Williamson is still the longest of longshots to capture her party's nomination, and remains more famous for selling wacky online merchandise than for anything she hopes to accomplish if elected president. Republican donors have boasted about padding her campaign coffers to help ensure Williamson qualifies for subsequent debates and sucks up valuable air time.

Indeed, Williamson briefly seizing the spotlight came after weeks of dismissing charges that she's a "new age nutcase." Earlier, Williamson's opening statement didn't seem to help that case much. In it, she decried a "false god" of multinational corporation profits that she said "takes precedence over the safety and the health and the well-being of we the American people."

In her closing statement, Williamson again dismissed the night's political insider rhetoric and intellectual discussions, proclaiming that it was instead time for "radical truth telling." But then she returned to the kind of long declaration that has become her trademark.

"I want a politics that goes much deeper," Williamson said, continuing that the only way to combat Trump is with "new voices of energy" that only come when the nation makes "amends for our own mistakes, love each other, love our democracy, love future generations. Something emotional and psychological that will not be, be, be emerging from anything on this stage. It will emerge from something I'm the one who's qualified to bring forth."

That brought more applause. But it seemed decidedly more hesitant than earlier in the night.