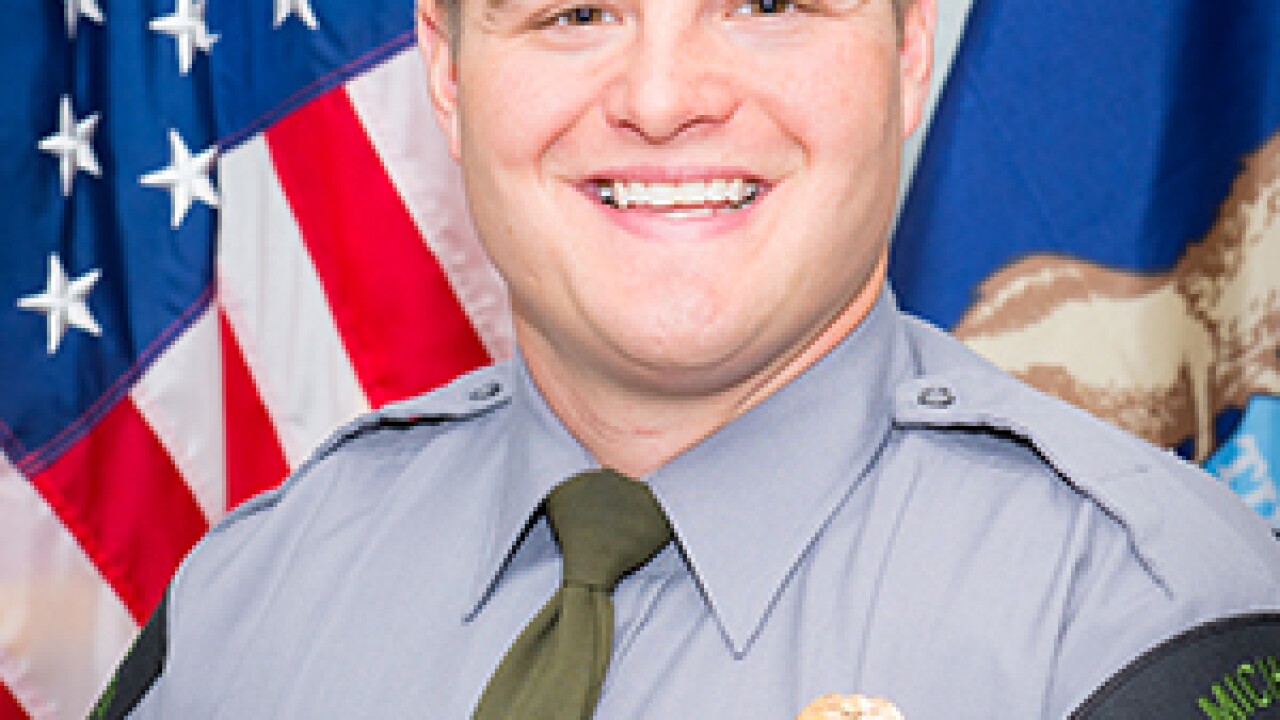 © 2017 State of Michigan
Matthew Clara/MI Dept. of Natural Resources
Michigan Department of Natural Resources Conservation Officer Mark Zitnik was off-duty boating with his family and friends July 25 when he rescued a man from drowning in Lake Superior. Zitnik patrols Alger County and has been a conservation officer since January 2015./

Michigan Department of Natural Resources Conservation Officer Mark Zitnik insists he was just doing his job, though the off-duty officer recently risked his own life to save a swimmer from strong Lake Superior currents.

Zitnik and his family were enjoying boating on Munising Bay in Alger County on the afternoon of July 25. As their boat navigated around a sandbar, off Sand Point Beach, Zitnik heard someone yell, “Help!”

Zitnik then jumped into “search and rescue” mode, asking everyone on the boat to be quiet. He then heard another cry for help and saw people onshore pointing toward two swimmers struggling in the water. They were about 200 yards from Zitnik.

The swimmers had been wading in shallow water covering a sandbar, but they ended up in deep water with a strong current.

Accelerating the boat to reach the swimmers, Zitnik dove from the moving vessel once he was 10-15 yards from the swimmer who appeared be having the most trouble.

Displaying normal signs of an active drowning, the swimmer attempted to climb on top of Zitnik saying, “I can’t swim. Save me. Help me.”

Zitnik used a water rescue hold he learned during his Michigan Conservation Officer Academy water training to secure the man. With his chest against the swimmer’s back, Zitnik wrapped his arm around the man’s chest. This caused the swimmer to begin to panic even more, resisting the rescue attempt.

Zitnik identified himself as a conservation officer and rescue swimmer in an attempt to calm the man. After a brief struggle, Zitnik swam the man back to the boat.

Meanwhile, boaters from a passing vessel assisted the second swimmer, who was able to help himself onto that boat.

Once the swimmer Zitnik saved caught his breath, he told the conservation officer that he was a Type 1 diabetic. He continued to thank Zitnik, saying, “You saved my life, man.” The swimmer was offered snacks to help balance his glucose levels, but he declined, insisting that he was OK and felt better.

Both swimmers were transported safely back to shore where they reunited with their family and friends.

“A conservation officer is never truly off-duty,” said DNR Law Enforcement Division Chief Gary Hagler. “Officer Mark Zitnik is a prime example of the training and dedication that all conservation officers commit to. Without hesitating, he risked his life while with his own family to save these two men.”

Zitnik patrols Alger County and has been with the DNR Law Enforcement Division since January 2015.

“It was meant to be. Zitnik was in the right place at the right time,” Hagler said.

There have been several drownings and near-drownings in Michigan this summer.

“If you don’t know the water you’re swimming in, ask locals about the conditions before you leave shore and always wear a life jacket or flotation device while boating, kayaking, canoeing or paddle boarding,” Hagler advised.