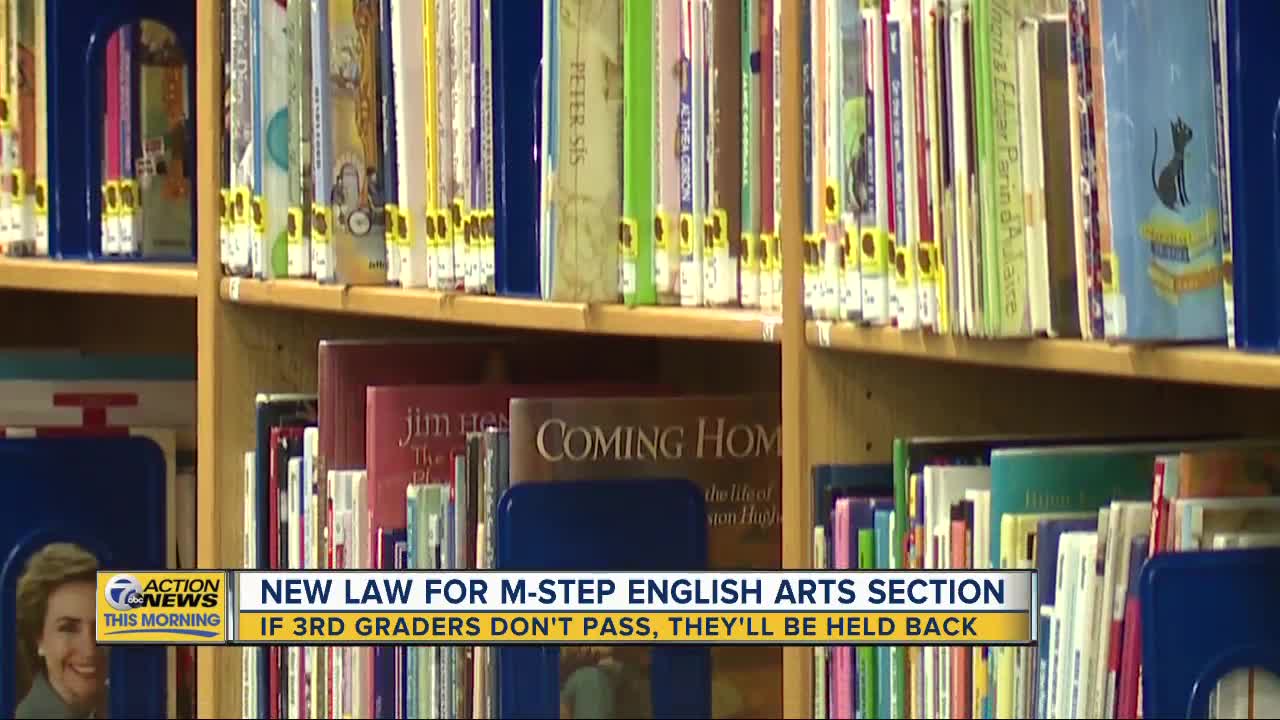 The 2019-2020 school year is the start of a new law on the books in Michigan mandating schools hold third graders back who do not pass standardized testing.

The 2019-2020 school year is the start of a new law on the books in Michigan mandating schools hold third graders back who do not pass standardized testing.

At Troy Public Schools, they are not changing their curriculum. Instead, they will be meeting in groups throughout the year to make sure their students are on track.

“Before, it would be talking with my principal about my students below grade level, talking to my reading teacher a little bit more in isolation, I would say those conversations have still continued in the past, but now we are just meeting together, so ensuring we are all on the same page,” said third grade teacher Lauren Fragomeni.

Over at Novi Public Schools, they are making it a point to reach out to parents and calm any fears. Superintendent Dr. Steven Matthews says he does not believing in holding students back.

“To say to a student, 'You know, we are really concerned about your academic progress, we don’t think you are going to be successful next year,' sends a message to those students,” said Dr. Matthews.

If a child does not pass, and parents do not want their child held back, they can petition the superintendent of the school to help move them into the fourth grade for the next school year.

“We will encourage parents to apply for the waiver so they can continue to go on to fourth grade believing that we, as a district, can support those students and help them continue to grow,” said Dr. Matthews.

Educators tell 7 Action News that concerned parents should talk to their children’s school if they have any questions or concerns, and remember that learning is a journey.

“I have two children of my own – they didn’t start off on grade level in kindergarten, but they grew to the point in their own timing they blossomed into the readers that we want,” Matthews said.

The Detroit Public Schools Community District has implemented its own multi-step literacy plan aimed at improving reading at every levelmore than 60 Literacy Nights workshops to engage parents on the new Read by Grade Three Law; in addition, the district launched the Let’s Read initiative to recruit community volunteers to read with K-3 students at the advisement of two community members Dr. Peoples and Helen Moore; the district also funded Academic Interventionists and Para Educators to support small group instruction.

"It is our intent to apply exemptions consistently and fairly to avoid retention for students who we would normally believe should not repeat 3rd grade," a district spokesperson said. "The decision to retain students will include alternative test result (in our case i-ready diagnostics), a portfolio project to show evidence of progress and proficiency and ultimately the decision will rest on parents and teachers."

"Our work over the past two years resulted in the development and implementations of better systems and processes to improve early literacy, including: standards training, a clear diagnostic tool to identify struggling readers (as mentioned above), grade level curriculum, and tier 2 intervention through iReady and para educators. Next year we will be introducing tier 3 intervention for ESE students through Orton-Gillingham materials. Our Let’s Read initiative also focused on K-3 with volunteers supporting struggling readers based on data analysis and aligned phonics intervention.

We will continue to communicate to our families and support our teachers as they continue to provide best in class instruction as reflected in our latest MSTEP scores. We made progress across every grade level. We are proud of this movement and although we have a long way to go, it is a great feeling to know we are moving in the right direction for our students.

"Dr. Vitti has advised that we have had about 3 percent of third graders historically retained, and by taking full advantages of the exemptions provided by the law, we are projected to end up with 3-5 percent of students retained."

To see M-STEP results for your child's school, click here .