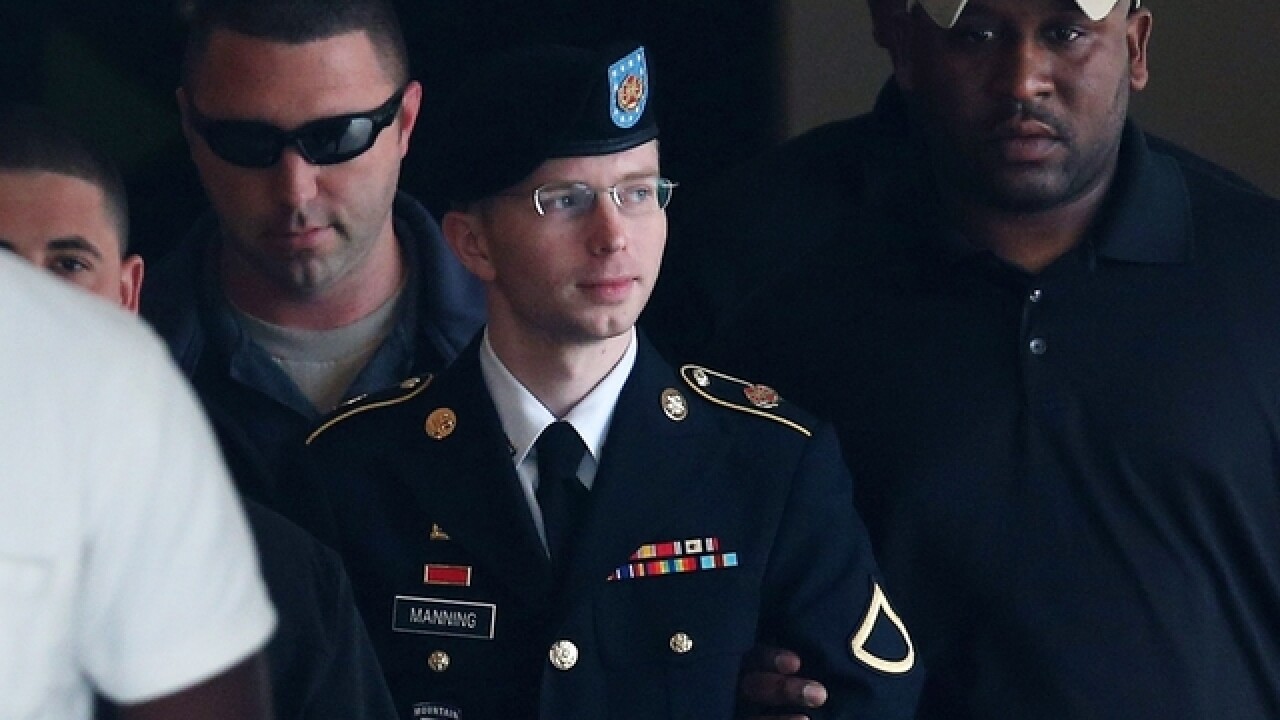 WASHINGTON (CNN) -- WikiLeaks celebrated Tuesday's news that President Barack Obama commuted the sentence of Chelsea Manning, hailing it as a "VICTORY" on Twitter.
WikiLeaks followed up later with a short statement from Assange: "Thank you to everyone who campaigned for Chelsea Manning's clemency. Your courage & determination made the impossible possible."
The Justice Department has not charged WikiLeaks founder Julian Assange with a crime, but US law enforcement officials have publicly acknowledged he is the subject of a criminal investigation.
"(Manning) should never have been prosecuted and sentenced to decades in prison. She should be released immediately," said Barry Pollack, an attorney representing Assange, following the commutation announcement. "For many months, I have asked the DOJ to clarify Mr. Assange's status. I hope it will soon."
Assange has lived in the Ecuadorian embassy in London where he was granted asylum in 2012 to avoid potential extradition to the United States and extradition to Sweden, where he risked prison time over accusations of sexual assault.
Assange has denied the validity of the sexual assault claims, but in several WikiLeaks tweets prior to Manning's commutation, Assange offered to submit himself to a US extradition in exchange for her release. The offer struck a puzzling note because the US has not made an extradition request for Assange.
Manning was convicted in 2013 of stealing and disseminating 750,000 pages of documents and videos to WikiLeaks. The material, which WikiLeaks published in 2010, included a classified video of a US helicopter attacking civilians and journalists in Iraq in 2007. Labeled "Collateral Murder," the film drew criticism from human rights activists for the deaths of innocent people.
Edward Snowden, a former National Security Agency contractor who provided troves of government documents to journalists and currently resides in Moscow to avoid facing arrest and prosecution in the US, wrote to Manning, "In five more months, you will be free. Thank you for what you did for everyone, Chelsea. Stay strong a while longer!" and linked to the Guardian's story about her commutation.
Snowden -- whom the White House said earlier in the day had not submitted a request for clemency -- added, "Let it be said here in earnest, with good heart: Thanks, Obama." He also went on to thank "all who campaigned for clemency on Manning's behalf."
"Since she was first taken into custody, Chelsea has been subjected to long stretches of solitary confinement -- including for attempting suicide -- and has been denied access to medically necessary health care. This move could quite literally save Chelsea's life," said Chase Strangio, an attorney for Manning in an ACLU statement.
Glenn Greenwald, one of the journalists to whom Snowden leaked the NSA documents to and a supporter of Manning's release, posted the letter he wrote advocating for her clemency and said, "Chelsea Manning is probably the most empathetic person I've ever met. So thrilled!! Can't wait to see what she does."
"Beyond the whistleblowing, ponder Manning's courage: she publicly announced her transition in a military prison in Fort Leavenworth, Kansas," Greenwald added.
An outpouring of support from other advocacy groups also came out in response to Manning's commutation. Amnesty International, Fight for the Future, the Electronic Frontier Foundation and many others rushed to celebrate Obama's decision.
National security hawks, however, expressed confusion and agitation.
Sen. Bill Cassidy, R-Louisiana, told reporters on Capitol Hill that he considered Manning a "traitor" and said he was "disappointed" about the commutation.
"If somebody leaks our state secrets, endangers Americans directly, we need to set an example that is severe and consistent," he said.
Speaking with CNN's Wolf Blitzer, Sen. Robert Menendez, D-New Jersey, said, "There are very serious questions when you release the type of documents that she did, and at the end of the day, what message do we send for the next person?"
In a statement calling the commutation "outrageous," House Speaker Paul Ryan said, "Chelsea Manning's treachery put American lives at risk and exposed some of our nation's most sensitive secrets."
CNN's Evan Perez and Ashley Killough contributed to this report.
The-CNN-Wire
™ & © 2017 Cable News Network, Inc., a Time Warner Company. All rights reserved.
Copyright 2017 Scripps Media, Inc. All rights reserved. This material may not be published, broadcast, rewritten, or redistributed.