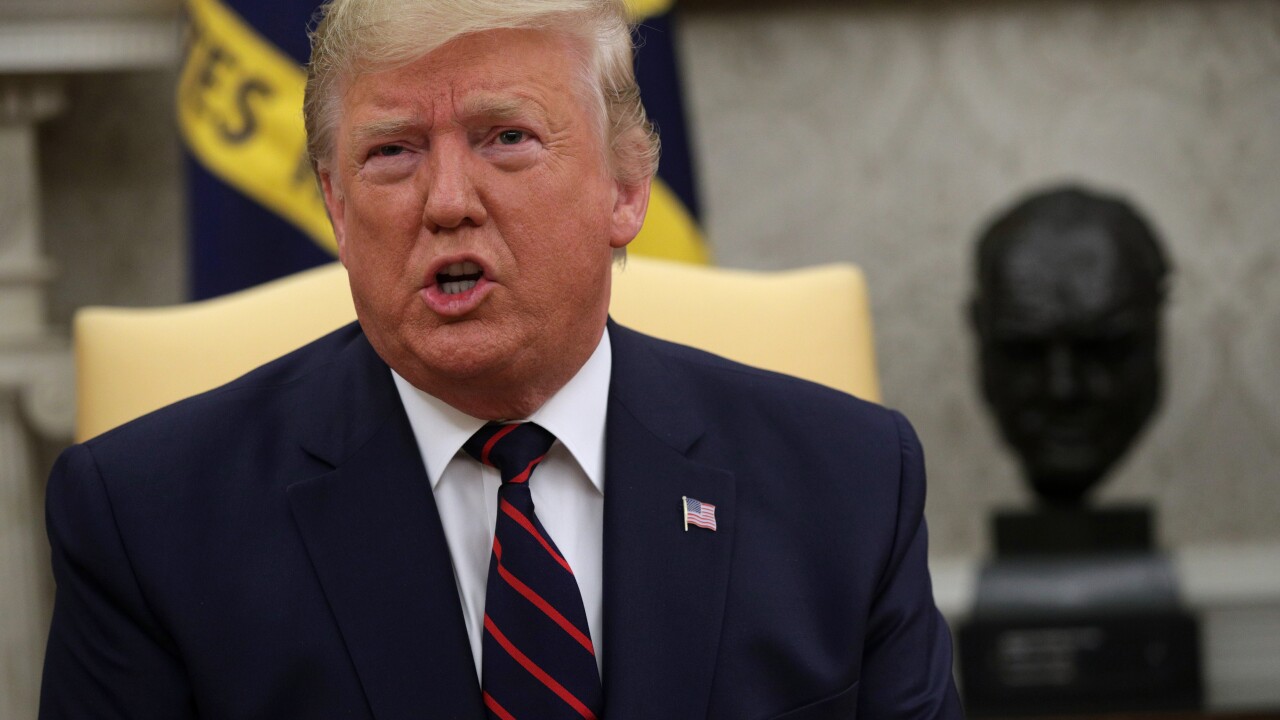 President Donald Trump asked the Supreme Court Thursday to block a Manhattan grand jury subpoena for copies of his financial records and tax returns, teeing up a test of Trump's expansive claims of immunity.

The case marks the first time lawyers for the President have gone to the Supreme Court arguing that the President is immune from criminal proceedings while in office.

"The Second Circuit decision is wrong and should be reversed," said Trump lawyer Jay Sekulow in a statement. "In our petition, we assert that the subpoena violates the US Constitution and therefore is unenforceable. We are hopeful that the Supreme Court will grant review in this significant constitutional case and reverse the dangerous and damaging decision of the appeals court."

The request comes a day after a different appeals court in Washington for the second time denied Trump's attempt to stop an accounting firm from turning over his financial documents to the House.

Both cases have so far resulted in losses for the President in the lower courts -- and now represent a test of whether the nation's highest court, currently dominated by conservatives, will side with Trump.

The arguments presented in these cases have similar strains to those the White House and the Department of Justice are making to keep officials from having to testify before Congress in the impeachment proceedings.

Consovoy asked the justices to take up the case this term.

If they do so, they will finally settle an issue that has dogged the President since before he took office: the release of his tax returns. The justices could rule broadly on the scope of presidential immunity or confine their opinion to the facts of the case at hand concerning a third party subpoena to his longtime accounting firm Mazars USA. Such a ruling would likely come out next spring just as the presidential election is heating up.

The court could simply deny to take up the case, leaving in place a lower court opinion that went against the President. That would clear the way for the subpoena to be enforced, although the records would be subject to rules governing grand jury secrecy.

The justices, including two of Trump's nominees, Justice Neil Gorsuch and Brett Kavanaugh, will meet behind closed doors in the coming weeks to discuss how to handle the petition. Briefing is expected to be over by the end of November. If the court wants to hear the case this term, it will likely act by mid-January.

The case arises out of a state criminal investigation led by Manhattan District Attorney Cyrus A. Vance, who served a subpoena on Mazars as part of an investigation into hush money payments. Trump's lawyers sued in federal court to block the subpoena.

On November 4, a three-judge panel of the Second Circuit Court of Appeals issued a careful opinion that sidestepped some of the President's more expansive claims.

"We have no occasion to decide today the precise contours and limitations of president immunity from prosecution," Judge Robert A. Katzmann wrote for his colleagues. "We conclude only that presidential immunity does not bar the enforcement of a state grand jury subpoena" directed at Trump's accounting firm, the Court held. Katzmann made sure to note however, that the "past six Presidents, dating back to President Carter, all voluntarily released their tax returns to the public."

In the opinion he pointed to a 1974 case, United States v. Nixon, where the Supreme Court upheld a subpoena directed to President Richard Nixon to produce certain tape recordings central to the Watergate investigation.

"The President has not persuasively explained why, if executive privilege did not preclude enforcement of the subpoena issued in Nixon, the Mazars subpoena must be enjoined despite seeking no privileged information and bearing no relation to the President's performance of his official functions," Katzmann wrote.

Trump's opponents believe he may have an uphill battle convincing the court to take the case.

"After all, it may be a political blockbuster, but it's not a legal one," said Constitutional Accountability Center President Elizabeth Wydra, who has opposed Trump in court.

"The case presents only a very narrow legal question -- whether a grand jury can subpoena a President's financial records from a third party like Mazars during the initial stages of a criminal investigation while a President is in office -- and the Manhattan District Attorney will have strong arguments that this is not a legal question that merits the Court's review, " she added.

The Department of Justice wrote a friend-of-the-court brief in the lower court backing Trump, although it took a less expansive view of presidential immunity. Justice Department lawyers argued that a court must demand a high bar in the face of a state criminal subpoena for records. "It must be shown that the requested material is 'essential' to the proceeding and that it cannot be obtained with 'due diligence' elsewhere," the lawyers wrote.

A district court judge also ruled against the President calling his arguments "repugnant to the nation's governmental structure and constitutional values."

Despite the losses in courts, the subpoena will not be enforced until the Supreme Court either declines to take up the case, or issues an opinion.