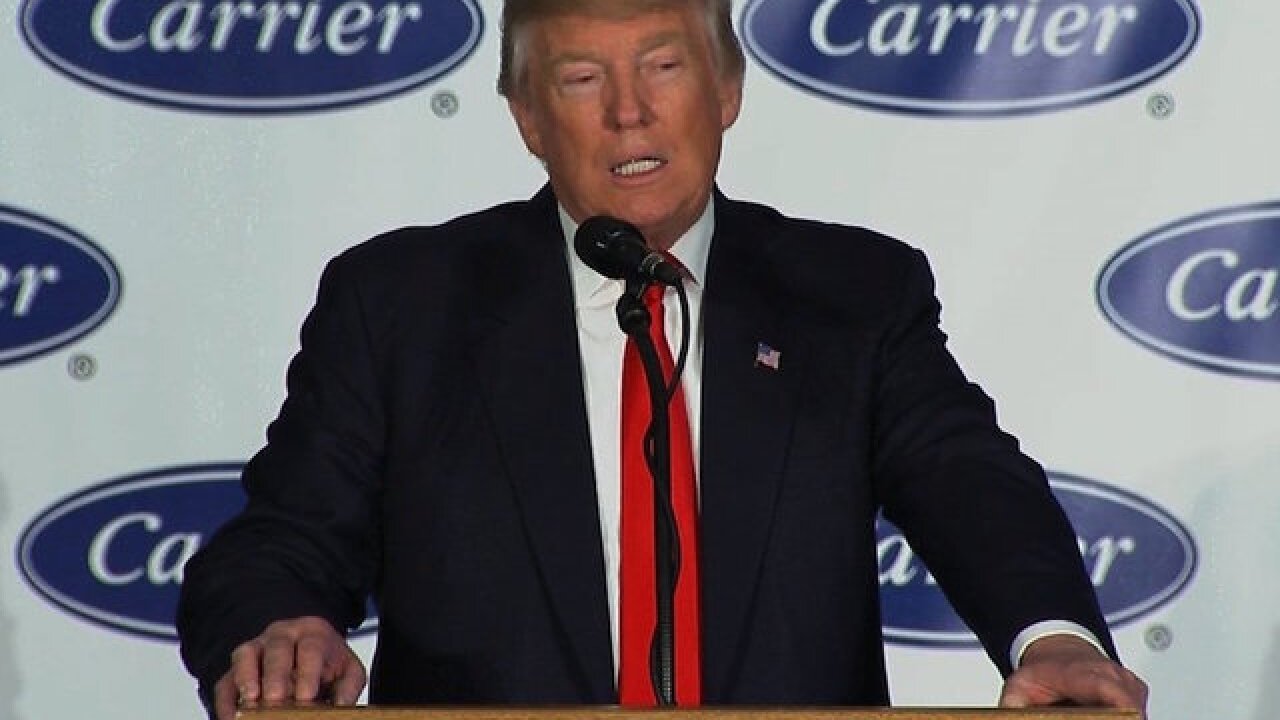 CNN
POOL
<p>Donald Trump praised Carrier for keeping over 1,000 jobs in the U.S. -- and threatened other companies that might consider leaving the country.</p>

WASHINGTON (CNN) -- Lawmakers and senior US intelligence officials drew a line in the sand for Donald Trump on Thursday, presenting a united front on their conclusion that Russia is a major threat to the United States and was behind election hacking -- a conclusion the President-elect has refused to accept.

"We assess that only Russia's senior-most officials could have authorized the recent election-focused data thefts and disclosures, based on the scope and sensitivity of the targets," Director of National Intelligence James Clapper, Undersecretary of Defense for Intelligence Marcel Lettre and the Commander of US Cyber Command, Michael Rogers, said in a joint statement to the Senate Armed Services Committee.

Clapper said that the hacking did not succeed in changing any vote tallies, but that it was impossible for intelligence to assess how the information released from the breaches affected voters' attitudes.

Arizona Republican John McCain, the chairman of that committee, emphasized the Russian role and delivered an implicit rebuke to Trump, who has urged people to "move on" from the issue of Moscow-directed hacking.

"Every American should be alarmed by Russia's attacks on our nation," McCain said. "There's no escaping the fact that this committee meets today ... in the aftermath of an unprecedented attack on our democracy."

McCain added that the "goal of this review is not to question the outcome of the election nor should it be." It's crucial that the country move forward with full knowledge about what happened and that Congress take bipartisan steps, he said.

In his opening questions to Clapper, McCain noted the intelligence community's conclusion that the cyberthefts and disclosures were intended to interfere with the US election process and could only have been authorized by Russia's most senior levels.

"We stand actually more resolutely by the strength of that statement that we made on the seventh of October," Clapper said. McCain then asked whether the cyberattacks changed the results of the election and if they had, whether that constituted an act of war.

Russia reacted almost immediately, with Kremlin spokesman Dmitr Peskov telling CNN that Moscow is "sick and tired of those irresponsibly blaming everything on our country. If there is a need for an enemy, why not to try someone else?"

"We have suggested cooperation on combating cyberthreats numerous times," Peskov said. "It was rejected."

But both Clapper and Rogers said in their testimony that the US has been trying to create international norms for cyber-related conflict. "We continue to engage with partners around the world about what is acceptable and unacceptable behavior in cyberspace, " Rogers said. "We are clearly not where we want to be in this regard."

On Wednesday, Trump championed WikiLeaks founder Julian Assange's claim that Russia wasn't the source of stolen documents from the Democratic National Committee that his group distributed.

McCain asked Clapper whether Assange had endangered men and women serving the US with his earlier release of State Department cables.

McCain then asked whether Assange should be accorded any credibility -- another implicit rebuke of Trump. Clapper responded, "No, he should not."

The President-elect's apparent support for Assange and his dismissal of the intelligence community's findings on Russia have alarmed fellow Republicans, but on Thursday morning, Trump tweeted that "the media lies to make it look like I am against 'Intelligence' when in fact I am a big fan!"

The intelligence leaders stressed before the Senate that instead of "moving on," Russia requires vigilance.

"Russia is a full-scope cyber actor that poses a major threat to US government, military, diplomatic, commercial, and critical infrastructure and key resource networks because of its highly advanced offensive cyber program and sophisticated tactics, techniques, and procedures," they said.

After Thursday's public hearing, Clapper, Lettre and Rogers may brief lawmakers in a closed session to discuss classified material, Senate aides said. Clapper is due to brief Trump Friday on Russia's actions in a private meeting.

The Senate hearing, the first in a series on cybersecurity, was initially meant to look broadly at internet dangers, but attention has turned almost exclusively to Russia amid growing calls in Congress to investigate the Russian hacks.

Trump's stance sets up a likely clash with Congress, where the push to probe Russia's actions has been intensifying. Republicans like Sen. Lindsey Graham of South Carolina and McCain want broad investigations into Russian behavior in cyberspace and overseas.

Graham told CNN in December that he and McCain plan to put sanctions together that hit Russian President Vladimir Putin "as an individual and his inner circle for interfering in our election" and in other nations' elections.

Graham said that there are "a hundred United States senators ... I would say that 99 of us believe the Russians did this and we're going to do something about it."

Meanwhile, a broad array of Democrats are calling for a public airing of Russia's efforts to sway the election. Senior Senate Democrats introduced a bill Wednesday to investigate the election interference.

The US intelligence community publicly announced with "high confidence" in October that Russia had hacked Democratic groups and individuals. After the election, they said they had further information that Russia's intent had been to tip the election in Trump's favor.

"This was done by the Russians," Graham said of the election hacking on CNN's "At This Hour." He referred to a briefing on the Russian cyber thefts that the most senior US intelligence leaders will give Trump on Friday. "I hope by Friday, President-elect Trump will come to that realization and ignore Mr. Assange," Graham said.

Graham pointedly added that he hopes Trump will "get his information and trust the American patriots who work in the intelligence community who swear oath and allegiance to the Constitution."

Republican House Speaker Paul Ryan told radio host Hugh Hewitt Wednesday that Assange is "a sycophant for Russia. He leaks, he steals data, and compromises national security." Ryan added that he hopes Trump will "get up to speed on what has been happening and what Russia has or has not done. He'll be better informed on that."

Democrats were harsher about Assange, who has been spent years in London avoiding extradition on sex assault charges thanks to the diplomatic protection of Ecuador.

"Today, Trump sided with Julian Assange -- an alleged sex offender who has hidden out in the Ecuadorian embassy for years and has dumped millions of classified State Department documents that put US persons at risk -- rather than our country's own intelligence professionals," California Rep. Adam Schiff, the leading Democrat on the House Intelligence Committee, said in a statement.

"That he would accept the transparently self-serving denials of the Kremlin is alarming enough, but that would now cite people like Assange who have demonstrated universal hostility to the United States and its interests takes him into new and even more treacherous territory," Schiff said.

Trump's incoming White House press secretary Sean Spicer tried to explain the President-elect's skepticism about the intelligence on Russia in a call with reporters Wednesday, distinguishing between raw data and conclusions drawn from that data.

Trump "is more skeptical of conclusions from raw data, rather than intelligence and raw data provided," Spicer said. "That's why he's looking forward to meeting on Friday."

Intelligence officials describe increasing dismay within their community about Trump's attacks and refusal to believe them.

"It's a sad day when politicians place more stock in Vladimir Putin and Julian Assange than in the Americans who risk their lives daily to provide objective non-partisan intelligence analysis," one official told CNN.

After the election, intelligence officials announced that they had enough information to assess that Moscow had distributed Democratic emails with the intent of helping Trump win.

Republican aides on the Hill say GOP lawmakers are privately expressing disbelief and incredulity at Trump's continued insistence on believing Russia over the US intelligence community. Everything they have seen points to Russian responsibility for election-related breaches, the aides said, and added that Republicans hope Trump comes around.