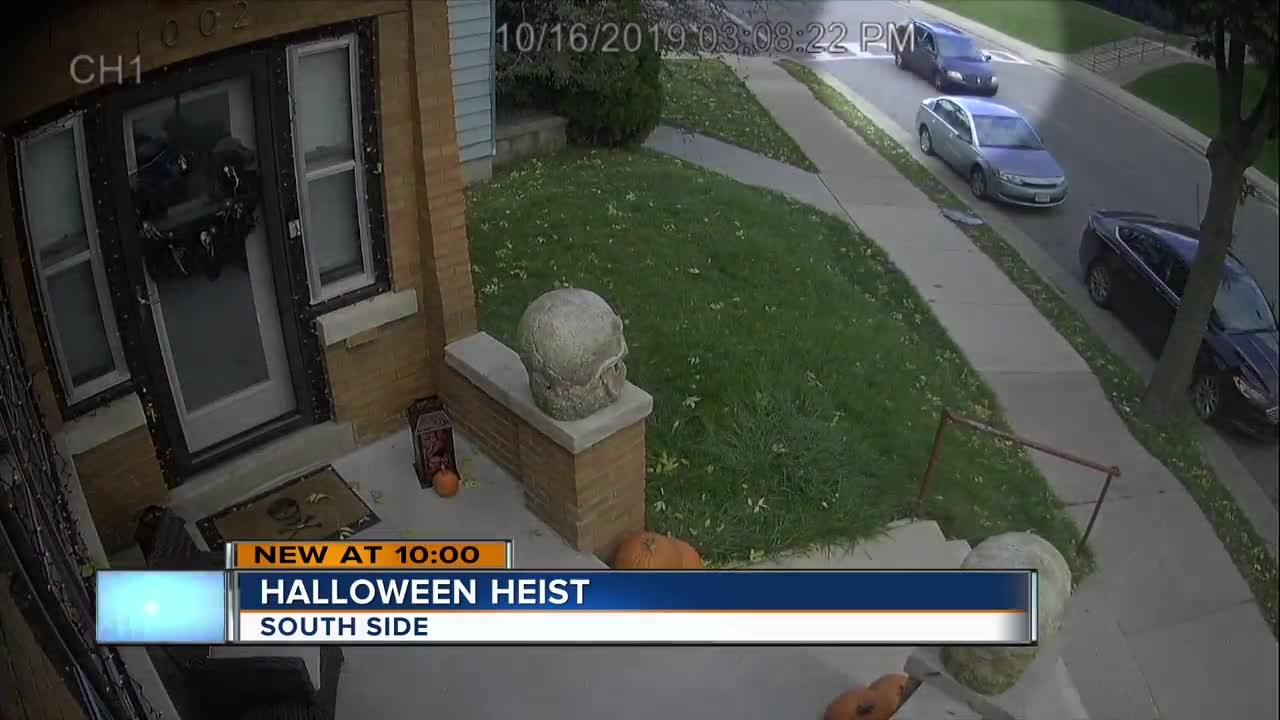 A bizarre Halloween heist was caught on camera Wednesday afternoon on Milwaukee's south side. Thieves swiped a family's decorations right from their front porch.

MILWAUKEE, Wis. -- A bizarre Halloween heist was caught on camera Wednesday afternoon on Milwaukee's south side. Thieves swiped a family's decorations right from their front porch.

The homeowner says the large decorative skulls that were stolen off his doorsteps are only worth a couple hundred bucks. His biggest disappointment is his family losing their sense of security.

The Bucios decorate their house every year to get their neighborhood in the Halloween spirit.

"Sometimes, parents come with their kids up to the doorstep here and they actually take pictures with their kids with all the decorative pieces that we leave out here," said Juan Bucio.

Now, the two main decorative pieces are no longer there.

"When I was getting home I didn't realize that the skulls were gone, but this morning when I stepped out I said 'where's the skulls?'" Bucio recalled.

Bucio checked his surveillance cameras to find thieves in a blue minivan slowly roll past his house on Windlake Ave. Wednesday afternoon peeking out the window. Less than a minute later, a man and woman walk right up to his house in plain clothes and go straight for the skulls.

"They were standing there nonchalant, kinda did the whole look around thing and then grabbed the skulls and took off running off to the side of the house," said Bucio.

Yakirannette Herrerra just so happened to be parked right outside the home to pick up her daughter from school when she saw the thieves in action.

"It's like day and school, some people around here," Herrerra said. "I don't know, it just (took) me by surprise."

Bucio contacted police and gave them a copy of the video hoping the crooks are either caught or return the skulls with regret.

"They don't understand that they're not just taking a material possession, they're also taking people's sense of security away from them," he said. "They don't get that back."

Milwaukee police said they are investigating this incident and they're looking for unknown suspects.

This story was originally published by Ben Jordan at WTMJ.