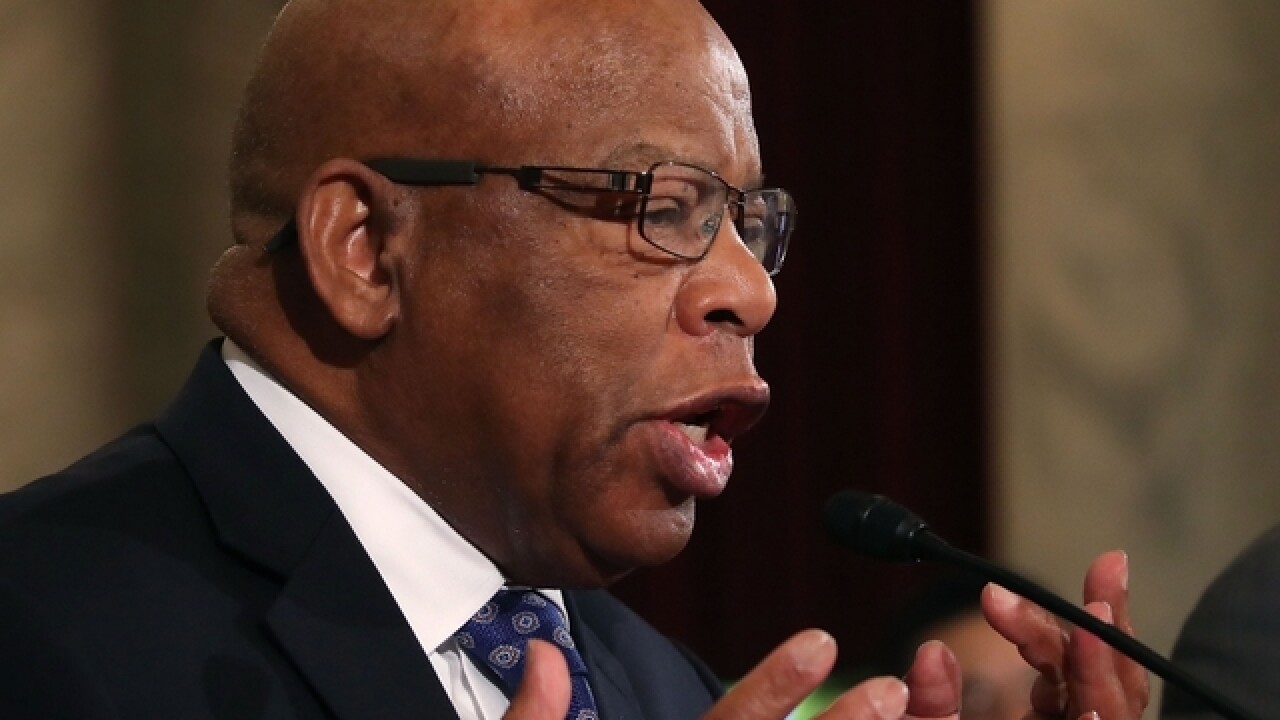 Some members of Congress have said they will be protesting in DC and in their districts instead. Here's a list of Democrats who have publicly said they won't be at the ceremony Friday.

The civil rights icon declared Friday that he would boycott the event because he doesn't see Trump as a "legitimate" president in light of Russian interference.

"You cannot be at home with something that you feel that is wrong," Lewis told NBC News.

Trump harshly responded Saturday, calling Lewis "all talk" and "no action" and saying he should focus more on "fixing and helping" his district rather than "complaining" about the Russia's role.

"'All talk, no action.' I stand with @repjohnlewis and I will not be attending the inauguration," Takano tweeted Saturday.

"I will NOT attend the inauguration of @realDonaldTrump. When you insult @repjohnlewis, you insult America."

"I will not be attending the inauguration of Donald Trump as our next president," the Congressional Progressive Caucus co-chair said Friday on the House floor. "My absence is not motivated by disrespect for the office or motivated by disrespect for the government that we have in this great democracy, but as an individual act, yes, of defiance at the disrespect shown to millions and millions of Americans by this incoming administration, and the actions we are taking in this Congress."

The office of Conyers, the dean of the United House of Representatives, confirmed to CNN he won't be attending the inauguration.

"It is with a heavy heart and deep personal conviction that I have decided not to attend the #TrumpInauguration on January 20, 2017," the California lawmaker tweeted Friday.

Velazquez tweeted Friday that she will be participating in a women's march protesting policies that activists say are harmful to American women.

"I will not be attending inauguration of @realDonaldTrump but WILL participate in the @womensmarch on January 21st," she tweeted.

"I'm just not a big Trump fan. I've met the guy and never been impressed with him," he told Oregon Public Broadcasting Friday. "I'll do my best to work with him when I think he's doing the right thing for the country. But he hasn't proved himself to me at all yet, so I respectfully decline to freeze my ass out there in the cold for this particular ceremony."

The lawmaker's spokesperson told the St. Louis Post Dispatch that Clay will be in his home state speaking to school children.

"Donald Trump has proven that his administration will normalize the most extreme fringes of the Republican Party. On Inauguration Day, I will not be celebrating. I will be organizing and preparing for resistance," she said Thursday in a statement.

"I will not attend the #inauguration2017 next week- cannot celebrate the inauguration of a man who has no regard for my constituents. #Bronx," he tweeted Thursday.

"I have decided that instead of attending the inaugural ceremonies in Washington this month, I'll spend time in California with my constituents making a positive difference in our community," he wrote on Facebook Tuesday. "From helping to build homes for local families to pitching in on cleaning up flood debris to welcoming new US citizens at a naturalization ceremony --- it will be an action-packed couple of days. Stay tuned here for more details."

"I support the peaceful transition of power, but I don't feel that I need to attend the pageantry associated with and for this president," she told the Boston Globe earlier this month.

"There is unprecedented concern by my constituents about the many threats posed by a Trump administration seeking to implement the President-elect's policies on health, environment, nuclear weapons and immigration, to name but a few," he said on Facebook.