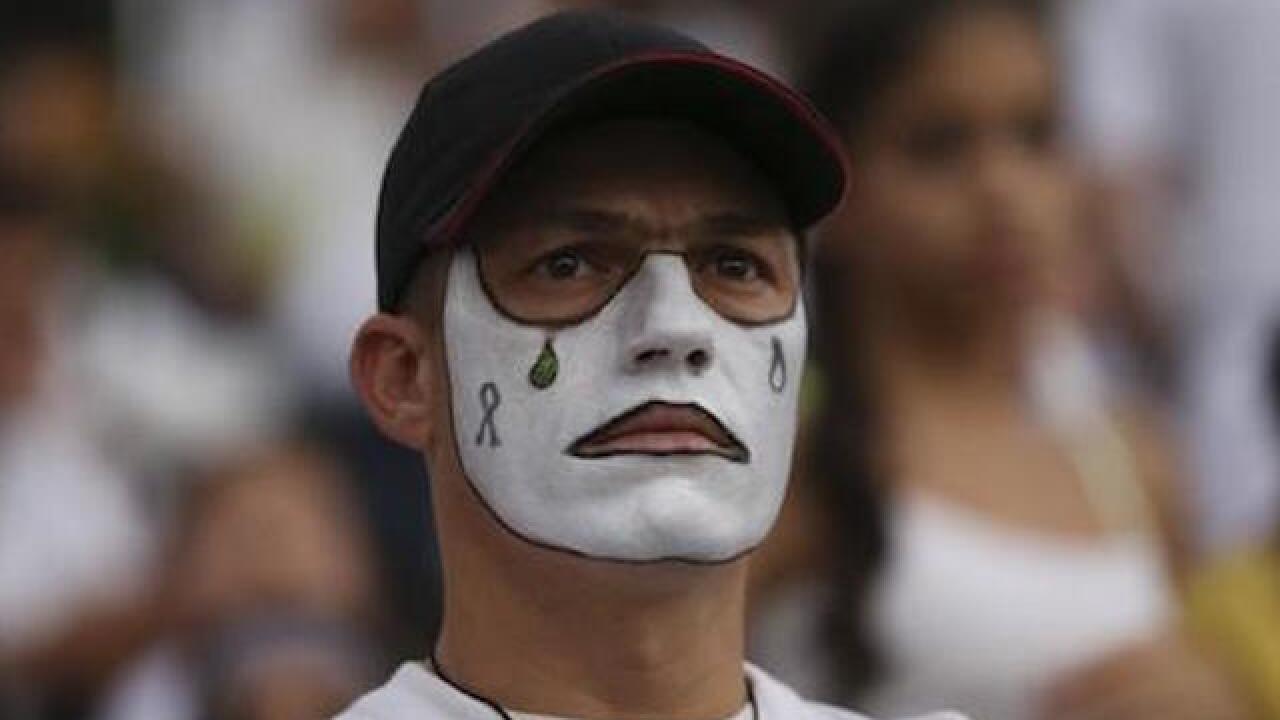 Copyright Associated Press
Fernando Vergara
<p>A fan of Colombia's Atletico Nacional soccer team attends a tribute to members of Brazil's Chapecoense soccer team who died in a plane crash, at Atanasio Girardot stadium where they were to play a game in Medellin, Colombia, Wednesday, Nov. 30, 2016. Brazil's team was traveling for the Copa Sudamericana finals to meet up with Colombia's Atletico Nacional Wednesday night. (AP Photo/Fernando Vergara)</p>

MEDELLIN, Colombia (AP) — Simultaneous tear-filled tributes were held at packed stadiums in Colombia and Brazil for the victims of this week's air tragedy that claimed 71 lives when a chartered plane crashed while ferrying a scrappy, small-town soccer team to the finals of a prestigious South American tournament.

The tributes took place Wednesday night as crash investigators aided by dramatic cockpit recordings were studying why the British-built jet apparently ran out of fuel before slamming into a muddy mountainside just a few miles from Medellin's international airport.

In the sometimes chaotic exchange with the air traffic tower, the pilot jet requested permission to land because of "fuel problems" without making a formal distress call. A female controller explained another plane that had been diverted with mechanical problems of its own was already approaching the runway and had priority, instructing the pilot to wait seven minutes.

As the jetliner circled in a holding pattern, the pilot grew more desperate. "Complete electrical failure, without fuel," he said in the tense final moments before the plane set off on a four-minute death spiral.

By then the controller had gauged the seriousness of the situation and told the other plane to abandon its approach to make way for the charter jet. It was too late. Just before going silent, the pilot said he was flying at an altitude of 9,000 feet and made a final plea to land: "Vectors, senorita. Landing vectors."

The recording, obtained by Colombian media, appeared to confirm the accounts of a surviving flight attendant and a pilot flying nearby who overheard the frantic exchange. These, along with the lack of an explosion upon impact, pointed to a rare case of fuel burnout as a cause of the crash of the jetliner, a BAE 146 Avro RJ85 that experts said was at its maximum range on the flight from Santa Cruz, Bolivia.

"The airplane was being flight-planned right to its maximum. Right there it says that even if everything goes well they are not going to have a large amount of fuel when they arrive," said John Cox, a retired airline pilot and CEO of Florida-based Safety Operating Systems. "I don't understand how they could do the flight nonstop with the fuel requirements that the regulations stipulate."

British aviation experts will investigate the black box and flight data recorder. The Air Accidents Investigation Branch said Thursday that the key instruments offering clues to what happened to the plane will be brought to Britain in the coming days for study.

While the experts worked, thousands of white-clad supporters of Medellin's Atletico Nacional club jammed the stands of the 40,000-seat stadium where the team had been scheduled to play a Copa Sudamericana finals match against Brazil's ill-fated Chapecoense. With the words "Eternal Champions" blazing on a big screen, the normally combative Atletico fans put sportsmanship first and paid tribute to the rival team, which they've urged be named the champion.

The names of each of the 71 victims of Monday night's crash was read aloud while a military band played taps and Black Hawk helicopters that helped in the rescue operations that pulled six people alive from the wreckage flew overhead. In the stands, mourners stood for a minute of silence holding candles and signs reading "We're all Chapeconese" and "Soccer has no borders."

The emotional high point of the tribute in Medellin was an address by Brazilian Foreign Minister Jose Serra, who traveled to the city along with a military cargo plane to help repatriate the bodies of the mostly Brazilian victims. He highlighted the fact that both teams shared the same green and white jersey colors, a sign to him of unity amid tragedy.

"We Brazilians will never forget the way Colombians lived as their own this terrible, terrible disaster that disrupted Chapecoense's dream," the normally stone-faced political veteran said while wiping away tears. "You offer us enormous comfort — a light in the darkness when all of us are trying to understand the unexplainable."

Across the continent, in Brazil, the mood was even more somber as residents of the small agricultural city of Chapeco gathered in the team's stadium for a Roman Catholic Mass with relatives of the victims and the players who didn't travel with the team to Medellin.

At the same time they had expected to be home watching their team on TV, more than 22,000 Chapecoense fans cried as they watched videos of tributes that poured in from all over the world. They then cheered the names of each of the dead players as well as the appearance of 5-year-old mascot Carlos Miguel, who usually appears on the sidelines of games in a Chapeco Indian headdress and who many had feared was on the doomed plane.

Chape, as the team is called locally, reached the top of South American soccer without any superstars or any players from Brazil's celebrated national team. It was in the fourth division just seven years ago and only reached the first division in 2014. Its run to the finals of the Copa Sudamericana impressed fans across the continent as it knocked out some of South America's legendary teams.

"We are the champions because we deserved this title," said goalkeeper Nivaldo, who was held back so he could prepare for his 300th game with the club Sunday in the last game of the Brazilian league season. "And we needed to be here with this crowd as much as they needed us here."

Three of the team's players are among the crash's survivors. Doctors said Wednesday that they remained in critical but stable condition. One player, Jakson Follmann, had his right leg amputated, while defender Alan Ruschel was recovering from surgery for a spinal fracture.