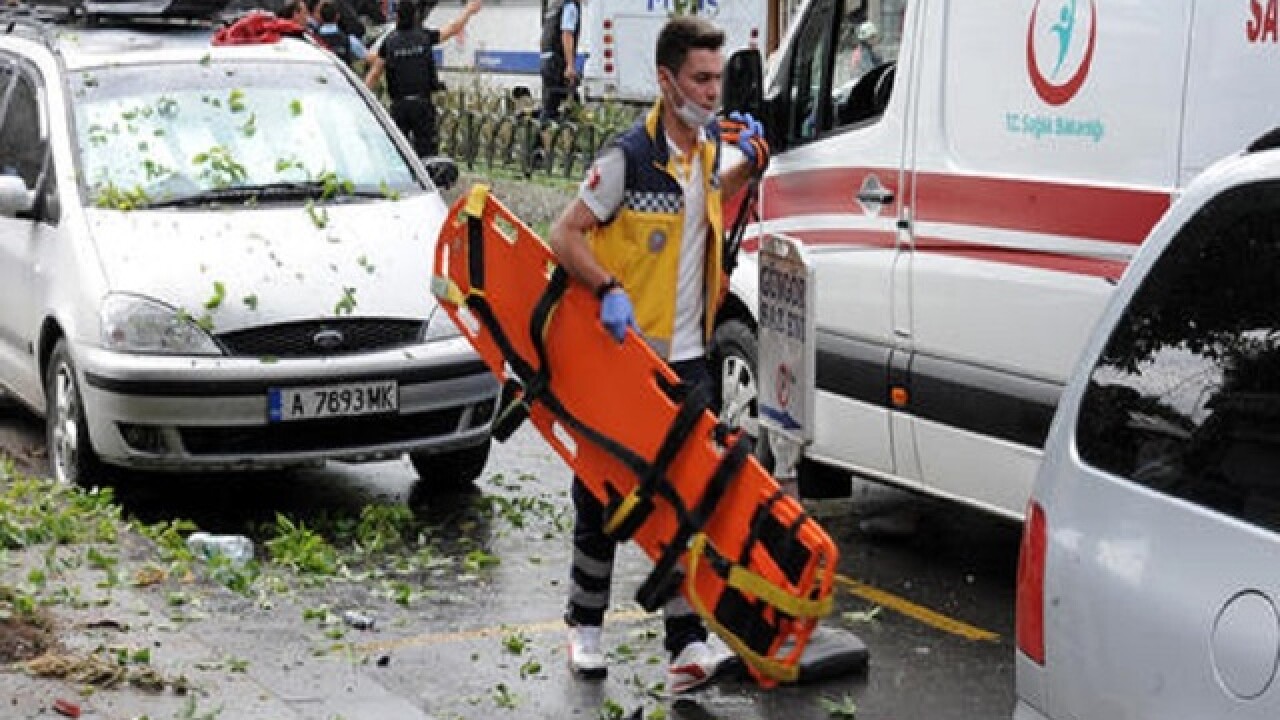 <p>A Turkish medic rushes in to work at the explosion site after a bus carrying riot police official was struck by a bomb in Istanbul, Tuesday, June 7, 2016. At least five police officers were wounded. The blast occurred at a busy intersection near an Istanbul University building in the city's Beyazit district during the morning rush hour. (DHA via AP) TURKEY OUT</p>

Speaking at the scene of the blast in the Beyazit district, Istanbul Gov. Vasip Sahin said the dead included seven police officers and four civilians. At least three of the wounded were in serious condition.

The bomb was placed inside a car and detonated as the police vehicle passed by, Sahin said. There was no immediate claim of responsibility, and Sahin wouldn't comment on who may be behind the attack.

Several groups have issues with the Turkish government. Rebels of the Kurdistan Workers' Party, or PKK, have targeted police and military personnel since July, when a fragile peace process between the rebels and the government collapsed. The Islamic State group has also been blamed for a series of deadly bombings in Turkey, which is part of the U.S.-led coalition against IS.

Hours after the blast, police detained four people for questioning for their possible involvement in the attack, the state-run Anadolu Agency reported. The suspects were taken to Istanbul's main police headquarters, the report said, without providing further details. The private Dogan news agency said the four suspects were involved in the hiring of the car used in the bombing.

Tuesday's attack was the fourth major bombing in Istanbul this year, with two of them targeting tourists and the others hitting security forces. The spike in violence has led to a sharp dip in tourism, a mainstay of the Turkish economy.

The police bus was flipped over by the force of the blast, which also damaged nearby buildings, including a closed hotel whose entrance appeared gutted and windows were blown out. The blast also shattered windows at a famous 16th-century Ottoman mosque, Sehzadebasi, wrecked several cars and forced the cancellation of some exams at nearby Istanbul University.

President Recep Tayyip Erdogan visited some of the wounded at Istanbul's Haseki hospital, where two people were undergoing surgery.

"These (attacks) are being carried out against people whose duty it is to ensure the security of our people. These cannot be pardoned or forgiven. We shall continue our fight against terrorists fearlessly and tirelessly until the end," he told reporters outside the hospital.

"Our security and forensic units will carefully and diligently trace evidence and shed light on those who perpetrated this vile attack," he said.

Foreign Minister Mevlut Cavusoglu condemned the attack, which occurred on the second day of the holy Muslim month of Ramadan.

"They are cold-heartedly exploding bombs on a Ramadan day," Cavusoglu said

Authorities imposed a news blackout preventing media from reporting details of the investigation.

U.S. Ambassador to Turkey John Bass condemned the "heinous attack," saying his country continues to "stand shoulder-to-shoulder with Turkey in the fight against terrorism."

The European Union expressed solidarity with Turkey as well as its commitment to "work closely to fight the global threat of terrorism."

"It's shocking that Turkey once again has to grieve for the dead and injured, who fell victim to a terrorist crime," said German Foreign Minister Frank-Walter Steinmeier.

An estimated 500 Turkish security personnel have been killed while fighting with the Kurdish rebels since July 2015, according to the military, which claims to have killed 4,900 PKK militants in Turkey and northern Iraq. Turkish warplanes regularly raid PKK bases in northern Iraq.

Limited access to conflict areas in southeast Turkey has made it difficult to verify casualty figures.

The PKK, considered a terrorist organization by Turkey and its allies, is fighting for autonomy for Turkey's Kurds in the southeast. The decades-long conflict has claimed 40,000 lives.

Last month, eight people were wounded in Istanbul when a car bomb targeted a military vehicle.