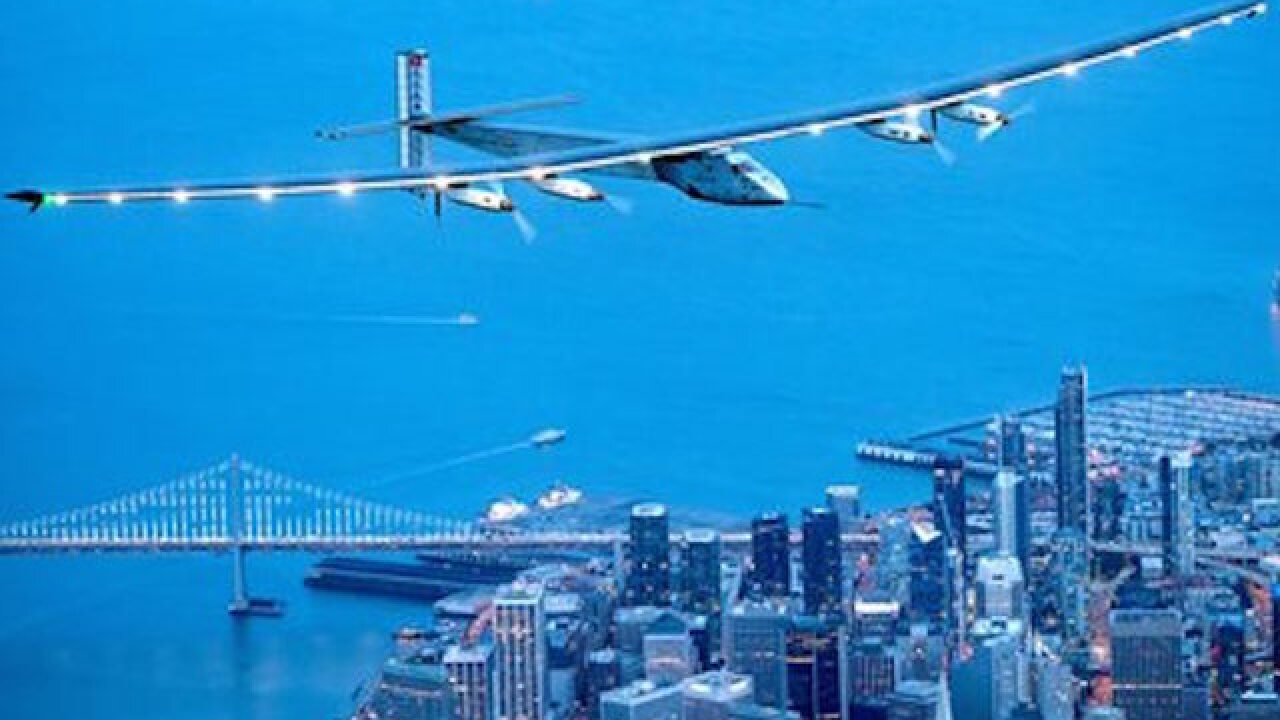 NEW YORK (AP) — The pilots of a solar-powered airplane on a globe-circling voyage that began more than a year ago said their flight over the Statue of Liberty before landing in New York inspired them on their mission to promote a world free from reliance on fossil fuels.

"Today, liberty is about finding and promoting renewable sources of power," said Bertrand Piccard, the initiator and one of the pilots of the Swiss-made Solar Impulse 2. "Our mission is to demonstrate that just the energy of the sun can give us enough power to fly day and night."

Piccard and Andre Borschberg, who flew the plane to New York's John F. Kennedy International Airport, arrived Saturday from Pennsylvania at 4 a.m. after a 4 hour-41-minute flight.

"It was really gorgeous," Borschberg said of the aerial view of the Statue of Liberty in New York Harbor. "I felt like I was a young child in front of a Christmas tree."

Their trip across the U.S. mainland began April 24, when Solar Impulse landed in Mountain View, California, after flying over the Golden Gate Bridge in San Francisco on its way from Hawaii.

Piccard said the pair hoped to leave sometime next week on their journey across the Atlantic Ocean toward Europe. He said weather conditions will dictate when they embark and a decision will likely be made in flight as to where they land — either Ireland, France, Spain, Portugal or elsewhere.

Across the U.S., they stopped in Phoenix; Tulsa, Oklahoma; Dayton, Ohio, home of aviation pioneers Orville and Wilbur Wright; and Allentown, Pennsylvania.

The Solar Impulse 2's wings, which stretch wider than those of a Boeing 747, are equipped with 17,000 solar cells that power propellers and charge batteries. The plane runs on stored energy at night. Ideal flight speed is about 28 mph, although that can double during the day when the sun's rays are strongest.

The trip began in March 2015 from Abu Dhabi, the capital of the United Arab Emirates, and made stops in Oman, Myanmar, China and Japan. The plane had a five-day trip from Japan to Hawaii, where the crew was forced to stay in Oahu for nine months after the plane's battery system sustained heat damage on its trip from Japan.