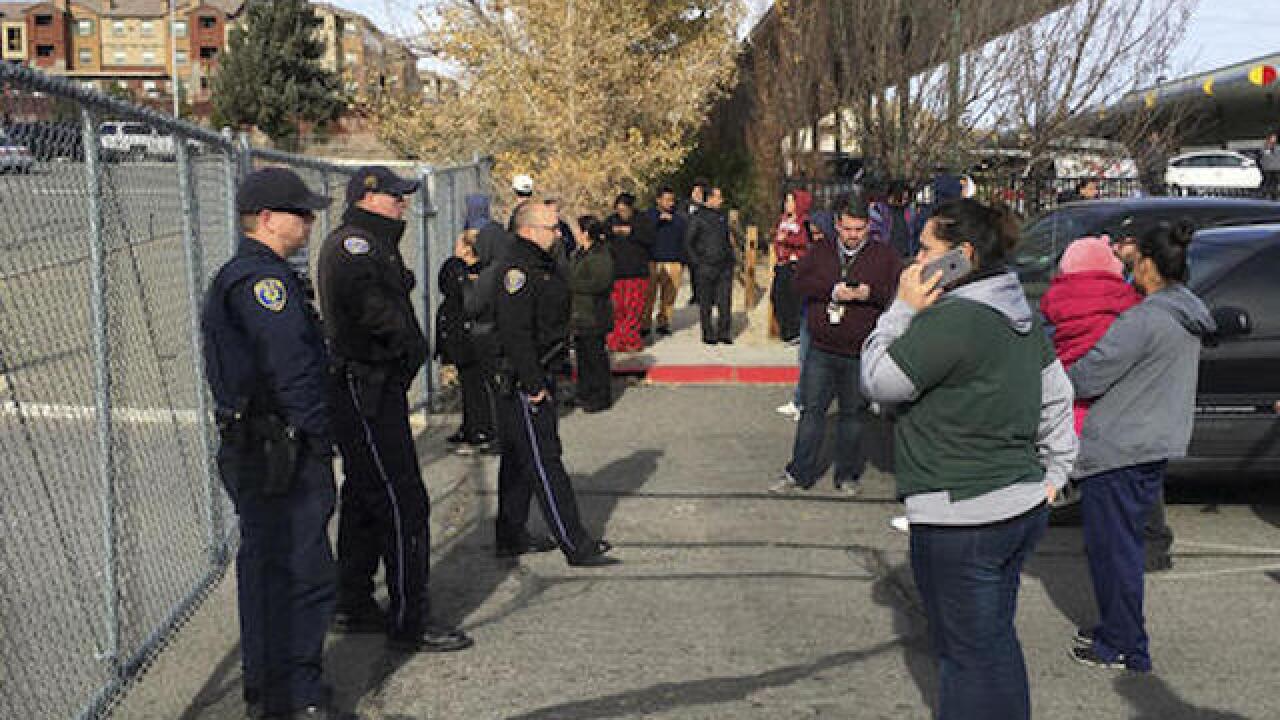 RENO, Nev. (AP) — Social media postings about a school district police officer shooting a Nevada high school student waving a knife toward classmates drew an immediate plea from authorities not to rush to conclusions about the on-campus incident.

The 14-year-old boy was reported in critical condition with a gunshot wound at a Reno hospital, Police Chief Jason Soto said Wednesday night.

The teen had been "armed with at least one knife and threatening other students" during a fight at the high school in a working class neighborhood on the city's north side, Soto said at a news conference.

The armed student failed to comply with the school police officer's verbal commands to drop the knife, and the officer ultimately fired his service weapon, "striking the student and ... stopping the threat," the chief said.

"Once the threat was stopped, the officer immediately began to provide medical aid to the student until emergency medical assistance arrived," Soto said. He refused to take any questions.

Hug High School was placed under lockdown and the 14-year-old was taken to Renown Regional Medical Center. The lockdown was lifted by midafternoon and students were released to their parents.

Reno police Officer Tim Broadway acknowledged in the hours after the shooting that many of the more than 40 students who witnessed the incident at about 11:30 a.m. Wednesday also shot cellphone video, but said at the time the question of whether the teen was armed remained under investigation.

Video posted online appears to show a male teenager wearing a blue shirt and white pants pacing and wielding a large kitchen knife in a circle of onlookers in an outdoor quad.

"There's some very disturbing video out there," Broadway told reporters Wednesday afternoon. "But there are other events that led up to this incident, so please don't react to those."

Broadway urged witnesses to turn video over to police before making it public. He said initial reports that another student had been stabbed before the shooting weren't true.

The Reno Gazette-Journal reported that it reviewed a Facebook video that hadn't been made public showing a student wielding a knife before being wounded.

A student, Robert Barragan, told the Gazette-Journal that two male students were fighting outside the school library before a police officer shot the knife-wielding student in the shoulder.

"Counselors will be available for any student or staff member who needs assistance," Washoe County School Superintendent Traci Davis said in a statement.

Nevada Department of Public Safety Director James Wright said earlier Wednesday the student was 16 years old. Soto corrected the age but did not release his name.

Hug High opened in 1968 and is named for Proctor Ralph Hug Jr., a former teacher, athletic coach and Washoe County School superintendent who served as a state senator and a federal judge.