Proposed laws would crack down on protesters 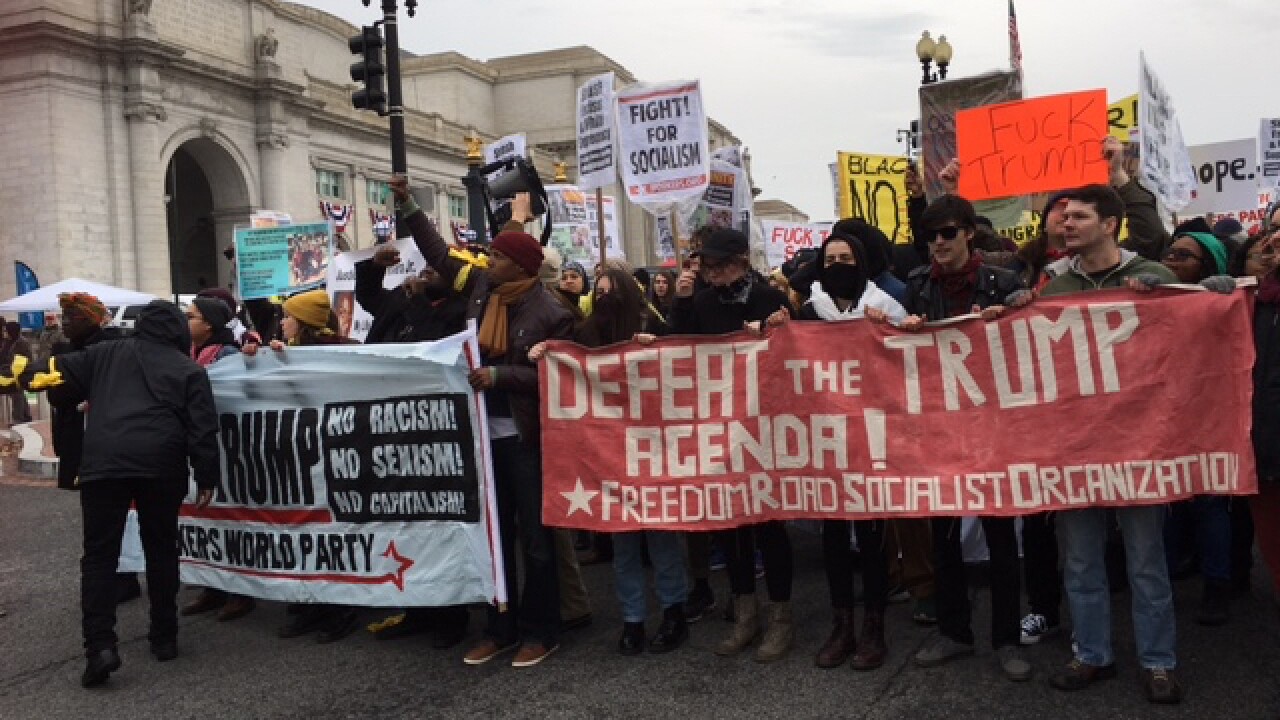 Copyright 2017 Scripps Media, Inc. All rights reserved. This material may not be published, broadcast, rewritten, or redistributed.
Lawan Hamilton
<p>A group of protesters, combined of many organizations, marches from Union Station to the U.S. Capitol. Protesters said it is not against Trump, but against the system in general.</p>

(CNN) -- It may soon be legal to run over protesters with your car in North Dakota. But only if you do it accidentally.

Lawmakers in that state are set to vote Friday on a bill that would legalize accidentally running over protesters in the road, one of several new measures in Midwestern states to discourage disruptive protests.

Rep. Keith Kempenich introduced the North Dakota bill, which states that if a driver "unintentionally" causes injury or death to someone blocking traffic on a roadway, then the driver will not be liable for damages.

Kempenich said he was spurred to act after Dakota Access Pipeline protesters last year moved to block public roadways, scaring some of his constituents.

"It turned from a protest to basically terrorism on the roadways, and the bill got introduced for people to be able to drive down the roads without fear of running into somebody and having to be liable for them," he told CNN.

It's not just North Dakota that's cracking down on protesters. Other communities that have endured multiple or prolonged protests are fighting back by trying to put similar laws on the books.

In recent weeks legislatures in Minnesota, Indiana and Iowa have moved to add laws specifically targeting roadway blocking. The proposed bills have dismayed the American Civil Liberties Union, which fears they would trample First Amendment rights.

Kempenich argued that any drivers who intentionally targeted protesters would still be prosecuted.

"If people stay off the roadway, it has nothing to do with you," he said. "[But] if you're on the roadway trying to intimidate some people, then you've got an issue."

Minnesota protest bill gets its own protest

The North Dakota bill comes amid contentious protests related to the proposed construction of the Dakota Access Pipeline, or DAPL. The pipeline, which would stretch south to Illinois, has largely been completed except for a hotly contested stretch near the Standing Rock Sioux tribe's reservation. President Donald Trump issued an executive order on Tuesday to advance the stalled project.

But roadway protests are a hot topic in Minnesota, too.

There, a Republican-led House committee passed a measure Tuesday that would allow local governments to sue criminally convicted protesters for law enforcement costs.

Shortly after the measure passed by a 9-6 vote, protests erupted as members of the public angrily shouted at lawmakers, according to CNN affiliate WCCO.

One of those protesters was a friend of Philando Castile, the man shot and killed by a St. Anthony police officer during a traffic stop last summer. That shooting sparked a series of protests in Minnesota led by the Black Lives Matter movement, which advocates for social justice for African Americans.

Rep. Nick Zerwas, a Republican who introduced that measure, said the public should not have to pay to cover law enforcement costs incurred dealing with illegal protests.

The local governments are only able to recoup costs if the protester is convicted of a crime, he said.

Zerwas is also behind a measure that would increase the criminal penalties in Minnesota for blocking traffic on a roadway.

"If you want to block a freeway, you're going to jail, and when you get out, you're gonna get a bill," he said.

Rep. John Lesch, a Democrat who voted against the measure, said lawmakers were using "overzealous intimidation tactics to suppress speech" and argued that the measure is unconstitutional.

Effective protest movements, such as the Civil Rights-era boycott of buses in Montgomery, Alabama, are necessarily disruptive, he said.

"Inconvenience is at the heart of protest," he said. "If you're not being inconvenienced, the likelihood of you listening is drastically lower. So it's remarkable that all these unarmed young black men were being shot all over the nation and no one cared until you had to take a detour to get to the mall."

Black Lives Matter Minneapolis posted its opposition to the measure on Facebook.

"This is not a post of defeat. This is a warning to those trying to take away our freedom. We Ready. We Coming," the group wrote.

Other states are considering similar bills.

In Indiana, a lawmaker proposed a bill that would require officials to direct police to clear protesters from roadways by "any means necessary," according to the Indianapolis Star. Action on the bill was deferred until a later date.

A lawmaker in Iowa, too, told the Des Moines Register of plans to propose a bill that would make it easier for law enforcement to push criminal charges on those who block roadways.

But at least one rights group is dismayed by the flurry of proposed laws.

"We are seeing an alarming trend of state bills introduced with the purpose or effect of criminalizing peaceful protest --- an act that lies at the very core of the First Amendment's protections," Lee Rowland, senior staff attorney for the American Civil Liberties Union, told CNN in an email.

Rowland said these proposals, if passed, will "undoubtedly" be struck down by courts for violating the First Amendment.

"Legislators are supposed to honor the will of the people, not criminalize it," she added.