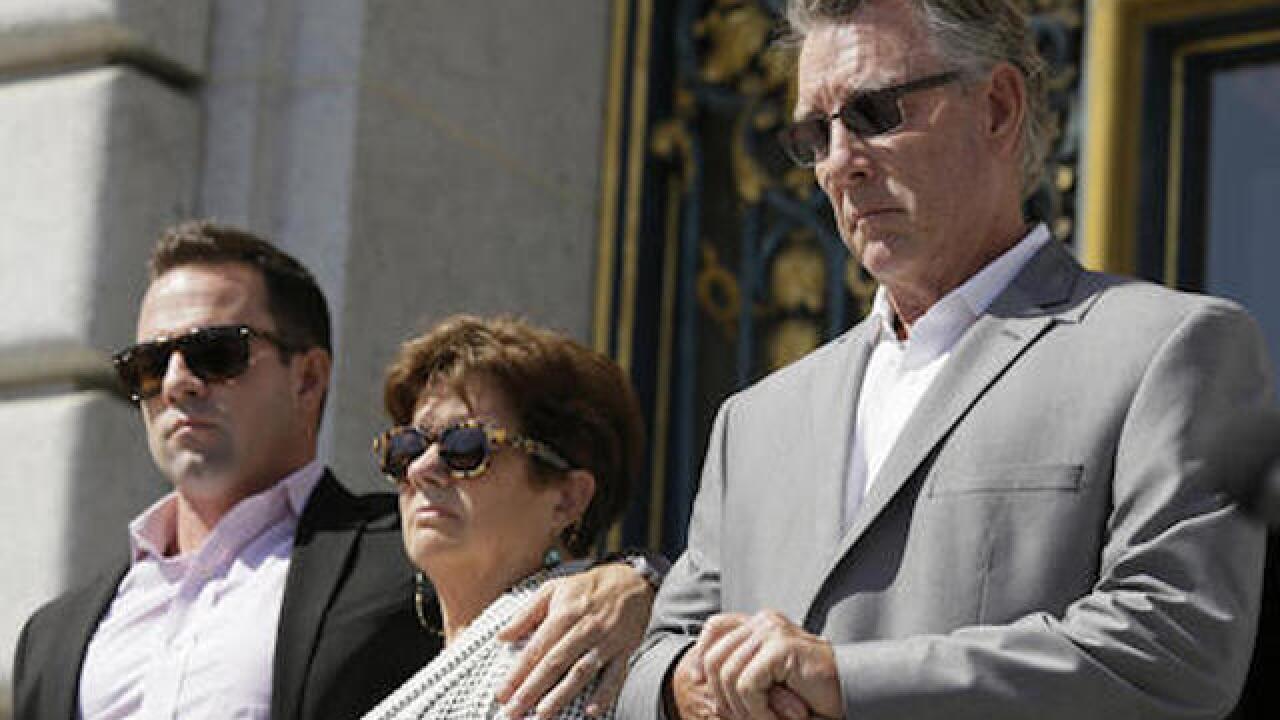 Copyright Associated Press
Eric Risberg
<p>n this Sept. 1, 2015 file photo, from left, Brad Steinle, Liz Sullivan and Jim Steinle, the brother, mother and father of Kate Steinle who was shot to death on a pier, listen to their attorneys speak during a news conference on the steps of City Hall in San Francisco. The parents of a woman killed on a San Francisco pier by a man in the country illegally is suing the city and two federal agencies that they say contributed to her death. Kate Steinle's parents filed the wrongful-death lawsuit Friday, May 27, 2016. (AP Photo/Eric Risberg)</p>

SAN FRANCISCO (AP) — The parents of a woman killed on a San Francisco pier have sued the city and two federal agencies, accusing them of contributing to her death because the man charged in the slaying was in the country illegally.

They also are suing Immigration and Customs Enforcement and the U.S. Bureau of Land Management. A BLM ranger reported that a gun was stolen from his car while it was parked in downtown San Francisco.

Lopez-Sanchez says he found the gun and it fired when he picked it up, striking Steinle, 32, in the back. He has pleaded not guilty to a second-degree murder charge.

Lopez-Sanchez was transferred to the city jail to face a marijuana sales charge after he completed a nearly four-year federal prison sentence for illegal re-entry into the country in March. The district attorney dropped charges and the sheriff's department released Lopez-Sanchez, ignoring an ICE request to keep him behind bars.

The sheriff at the time cited the law in defending the release of Lopez-Sanchez, a repeat drug offender and habitual border crosser.

Steinle's parents allege that the sheriff had an obligation to alert immigration officials that Lopez-Sanchez was being released, despite the city's sanctuary policy. The lawsuit also alleges that ICE knew Lopez-Sanchez was in the San Francisco jail and that agents should have taken him into their custody regardless of the sheriff's actions.

Finally, the lawsuit alleges that the BLM agent was negligent for leaving a service handgun in a backpack in his government-issued car. A burglar broke a window and stole the backpack two weeks before Steinle was shot.

Matt Dorsey, a spokesman for the city attorney, said the city's "heart goes out to the Steinle family" but that the sheriff can't be "held liable for the conduct of a criminal."

Officials with BLM and ICE didn't respond to inquiries for comment Friday.