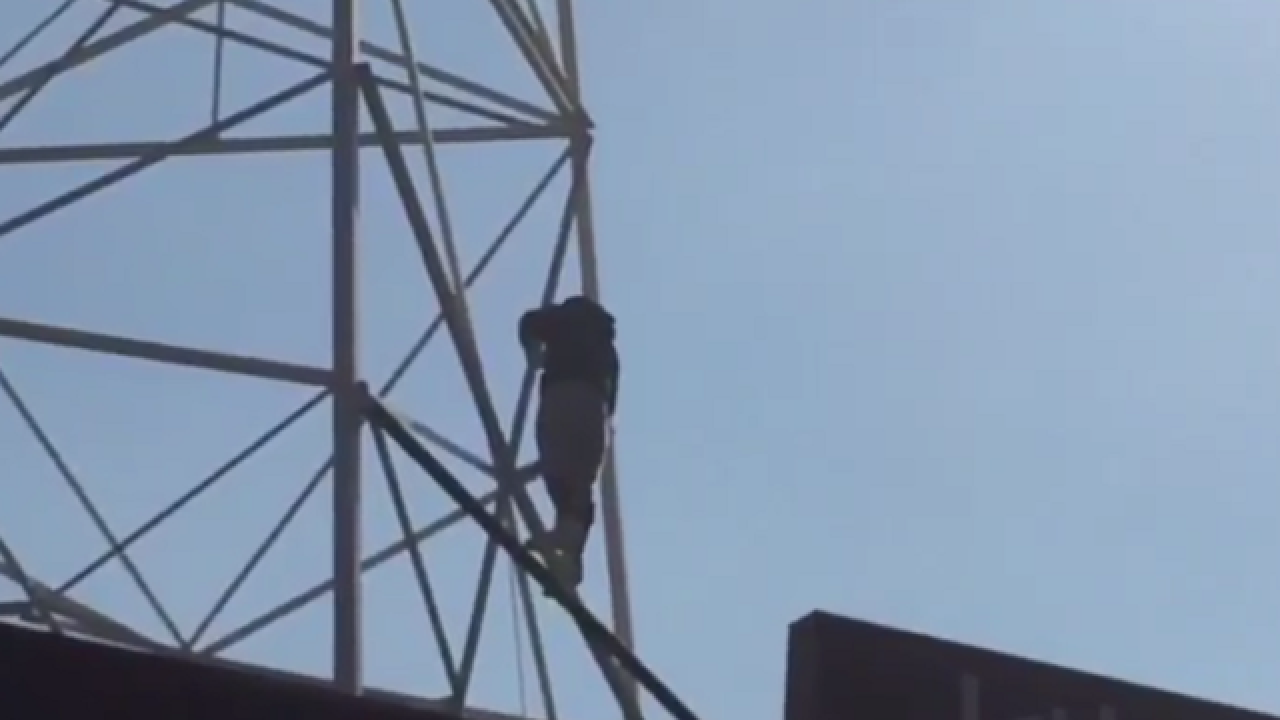 By: Mina Abgoon
Posted at 8:48 PM, May 11, 2016
After a nearly three-our standoff with authorities Wednesday, a man who climbed an iconic Los Angeles radio tower for unknown reasons returned safely to the ground.
Officials have reopened Sunset Boulevard after closing it during the incident, which took place at the Sunset Bronson Studios.The man, identified by police as only "Chris," came down on his own after a woman who recognized him from church offered to help him, KTLA reports.
The situation began around 4:45 p.m. local time.The man, wearing a green hooded sweatshirt clung to the 160-foot with no signs of backing down. At one point, it even appeared that he was smoking.
Discussions and negotiations with the man began just before 7 p.m., when two fire engines extended their ladders toward the tower and began talking to the man.
Police are still not clear what prompted the climb.

Very close image of the man who is on the @KTLA tower in Hollywood, so far refusing to come down. pic.twitter.com/7d7NQmbLOj

"Of course, we're hoping that this will be peacefully resolved and we can get him to come down, but we do have the Fire Department on scene in case he does decide to jump," Los Angeles Police Department Detective Meghan Aguilar said at the time. "It does appear as though he's taking his time up there."
A crisis negotiation team and mental health team responded to the scene. Three inflatable air cushions were reportedly been place at the base of the tower.
KTLA notes that the tower was recently relocated to the corner of Sunset Boulevard and Bronson Avenue, due construction on the lot. Police subsequently shut down Sunset Boulevard to deal with the incident.
The situation is similar to one which occurred in 2011, also prompting an emergency response.
Officials with the Los Angeles Police Department and local fire departments responded to the scene. Check back for updates.
Scripps Only Content 2016