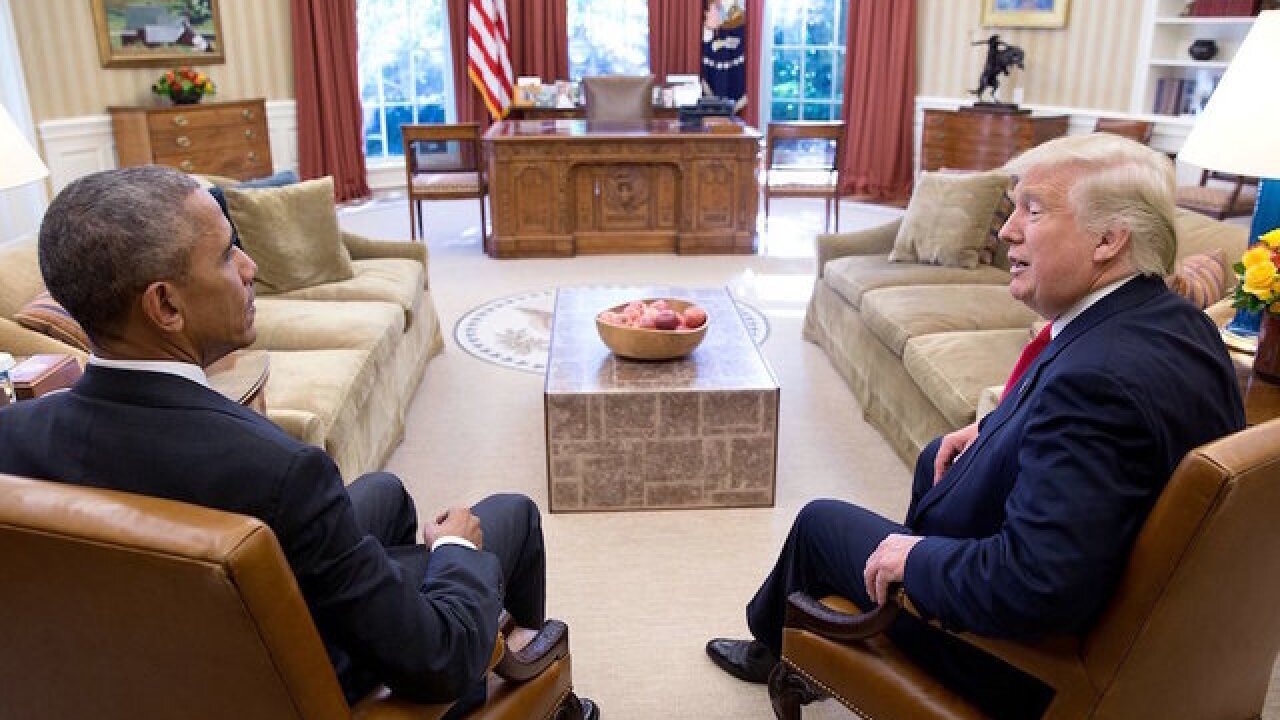 Less than three weeks out from leaving the White House, Obama visited Democratic lawmakers on Capitol Hill with a mission to save his signature healthcare reform law as Republicans are moving quickly to unroll the Affordable Care Act.

In the closed-door meeting, the President urged fellow Democrats to not "rescue" Republicans by helping them pass replacement measures, according to sources in the room.

He also floated this idea: Start referring to the GOP's new plan as "Trumpcare."

The suggestion was a clear indication of the Democratic Party's goal of turning the tables on Republicans, who are already facing pressure to quickly craft a replacement bill.

As he walked by a scrum of reporters, Obama would only say this about the Democratic Party's message: "Look out for the American people."

The feisty remarks from the outgoing President came as Republicans also huddled on Capitol Hill Wednesday morning to chart their path forward repealing Obamacare. Vice President-elect Mike Pence visited with GOP lawmakers in what became a morning of dueling meetings on Day Two of the new Congress.

Pence told reporters following the meeting: "Make no mistake about it: We're going to keep our promise to the American people -- we're going to repeal Obamacare and replace it with solutions that lower the cost of health insurance without growing the size of government."

The public theater of the simultaneous meetings Wednesday was the clearest indication in the new year that Obamacare will be an all-consuming and deeply contentious political fight under the next president, Donald Trump.

With Republicans about to control the House, Senate and the White House, Democrats are strategizing on ways to pressure the GOP against rolling back the law -- and ensuring the Republicans are held responsible for any disruptions in health coverage. (Following their meeting, Democratic lawmakers started to push the phrase: "Make America Sick Again" -- a play on Trump's campaign slogan, "Make America Great Again.")

Republicans, meanwhile, have the massive task of figuring out how to replace what they repeal.

Republican members leaving the meeting with Pence said the gathering felt like a "pep rally" but that there were not many policy details discussed. According to GOP Rep. Chris Collins, the party is eyeing the goal of crafting a replacement proposal in six months.

Pence, who was a congressman before serving as Indiana's governor, recalled his time in the House and accused Democrats of breaking the promises made at the time.

"The reality is that I was here in March of 2010 in another capacity when Obamacare was signed into law," Pence said alongside other GOP leaders including House Speaker Paul Ryan. "I remember all those promises. We were told that if you like your doctor, you can keep it. Not true."

Both Ryan and Pence promised a "careful" replacement of the law, trying to assuage concerns that a straight repeal of Obamacare would leave many including those with pre-existing conditions without healthcare.

The benefits of Obamacare was something the President emphasized in his meeting with Democrats, according to Rep. Maxine Waters, and argued that the country largely likes the law and that he has received countless letters thanking him for Obamacare.

Another lawmaker in the room said the mood among Democrats was "fired up."

"In two weeks I will no longer be a politician, but I'll still be a citizen. I envy you so much right now, because I would love to be on the field," Obama said, according to the member.

Some lawmakers on Tuesday questioned the wisdom of planning clashing meetings, each designed to advance a partisan agenda.

"Any type of a meeting that we have that's not bipartisan is not in the proper scheme of things of starting out the new year," said Sen. Joe Manchin, the moderate Democrat from West Virginia, who said he would skip the Obama meeting.

Republicans have long vowed to get rid of Obamacare, voting on dozens of measures that would repeal the law. Those attempts were largely theatre; there was never a scenario in which Obama himself would approve the repeal of his own landmark legislative accomplishment.

Trump made getting rid of the law a key element of his campaign strategy. He said on Twitter Tuesday that Obamacare provided "lousy healthcare." With Trump headed for the Oval Office, and Republicans controlling both houses of Congress, the prospects for a successful repeal now appear more realistic.

There remain divisions, however, on which precise elements of the law to scrap, and how to replace Obamacare with a law that doesn't strip Americans of their health insurance.

Sen. Rand Paul, R-Kentucky, wrote in an op-ed Tuesday that lawmakers shouldn't vote on repealing Obamacare until a replacement plan was developed.

"If Congress fails to vote on a replacement at the same time as repeal, the repealers risk assuming the blame for the continued unraveling of Obamacare. For mark my words, Obamacare will continue to unravel and wreak havoc for years to come," he wrote.

And Trump's campaign manager Kellyanne Conway, who's been tapped to serve as his senior counselor at the White House, said Tuesday that passing repeal and replacement measures simultaneously would be "the ideal situation."

"We don't want anyone who currently has insurance to not have insurance," Conway said on MSNBC, adding there "are some pieces of merit in the current plan."