'Moana' a Disney hit but portrayal irks some in the Pacific 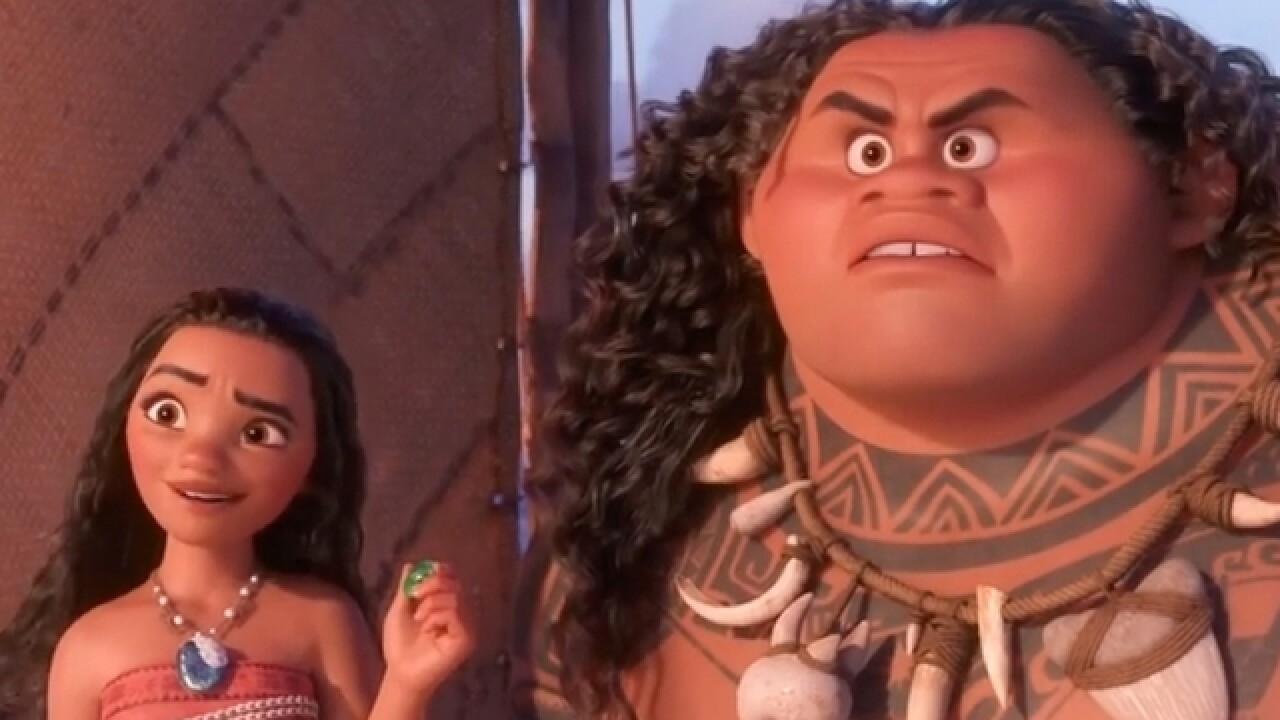 By: Associated Press
Posted at 11:31 PM, Nov 29, 2016
WELLINGTON, New Zealand (AP) — Disney's animated movie "Moana" debuted to critical acclaim and box office success over the Thanksgiving weekend, but some people in the South Pacific dislike how it depicts their culture.
Of particular concern is the movie's portrayal of the demigod Maui, who is shown as enormous and egotistical, albeit with a good heart. That has been jarring for some in Polynesia, where obesity rates are among the highest in the world and where Maui is a revered hero in oral traditions.
Criticism from the Pacific has likely stung Disney, which went to extraordinary lengths to ensure the movie was culturally appropriate after being accused of racism in previous movies such as "Aladdin" (1992). For "Moana," the filmmakers traveled to the Pacific and met with anthropologists, historians, fisherman and linguists, part of what they came to call the Oceanic Story Trust.
The fictional movie takes place 3,000 years ago in the islands of Polynesia, an area that includes Hawaii, Tonga and Tahiti. The star is 16-year-old Moana, voiced by Hawaiian actress Auli'i Cravalho, who goes on an ocean voyage with Maui, voiced by Dwayne "The Rock" Johnson.
The movie made $82 million over the five-day weekend, placing it behind only "Frozen" (2013) for a Thanksgiving debut.
Disney suffered an early embarrassment when it decided to sell costumes of Maui, which featured brown shirts and long pants with full-body tattoos. Disney put the costumes in stores in time for Halloween, but quickly pulled them after critics compared them to blackface.
Producer Osnat Shurer, speaking by phone from Berlin where she was promoting the movie, said the moviemakers spent five years working closely with people in the Pacific to create what they believe is a beautiful representation.
"The costume fell short of that," she said. "As different things grow around the movie, sometimes they don't hit the same mark."
Shurer said that when it came to figuring out the character of Maui, they found that different islands, villages, and even households, had different impressions of him.
"To some he's a Superman, to others he's a trickster," she said.
In all the stories, she said, Maui was clearly larger than life. At first, however, they envisioned him as a little smaller, and bald. But he just seemed to grow as the movie progressed. She said animators try to find the essence of a character and then exaggerate those features.
"We knew we wanted him to be big and wanted him to be strong," she said. "But he also moves with an incredible lightness."
She said she hopes Pacific Islanders see the movie with an open mind.
"I feel good about the movie we've created and that it can withstand scrutiny," she said. "All I can say is we did it with love and respect."
In New Zealand, the movie does not debut until after Christmas. But Teresia Teaiwa, a senior lecturer in Pacific studies at Victoria University of Wellington, said she was concerned about the portrayal of Maui.
"Before Disney, I've seen a lot of other representations, and Maui is a hero," she said. "I think it's clear from the trailers I've seen that he's a buffoon in Disney. It's a dramatic shift. He was a trickster but not a buffoon."
Teaiwa said if Disney really wanted to be culturally correct they would have paired Maui with a female deity, as he is in most legends, and not with a teenager.
"They wanted to get it right commercially without getting it wrong culturally," Teaiwa said. "But there are some things that they clearly didn't mind getting wrong."
She said there seemed to be a U.S. stereotype of Pacific Island men as huge, perhaps because the main exposure to them seemed to be through activities like NFL football.
Teaiwa said she was appalled by the Maui costume, particularly because some ethnologists from early last century had managed to collect the preserved, tattooed skin of Pacific people who had died.
"I thought it was macabre. I thought it was really creepy," she said of the costume. "It gave me the shudders to see something like that produced so lightly and in such a trivial way."
New Zealand politician Marama Fox, the co-leader of the indigenous Maori Party, said most Disney heroes tended to look far more muscular than Maui.
"I still don't think that's an accurate depiction of what Maui would look like or should look like," she said. "And it's a little bit of cultural misappropriation."
But asked if she planned to see the movie, Fox, a mother of nine, said she had little choice.
"How am I going to keep my kids away from singing Maori people and Polynesians?" she said. "Of course they're going to want to go and see it."
Copyright 2016 The Associated Press. All rights reserved. This material may not be published, broadcast, rewritten or redistributed.