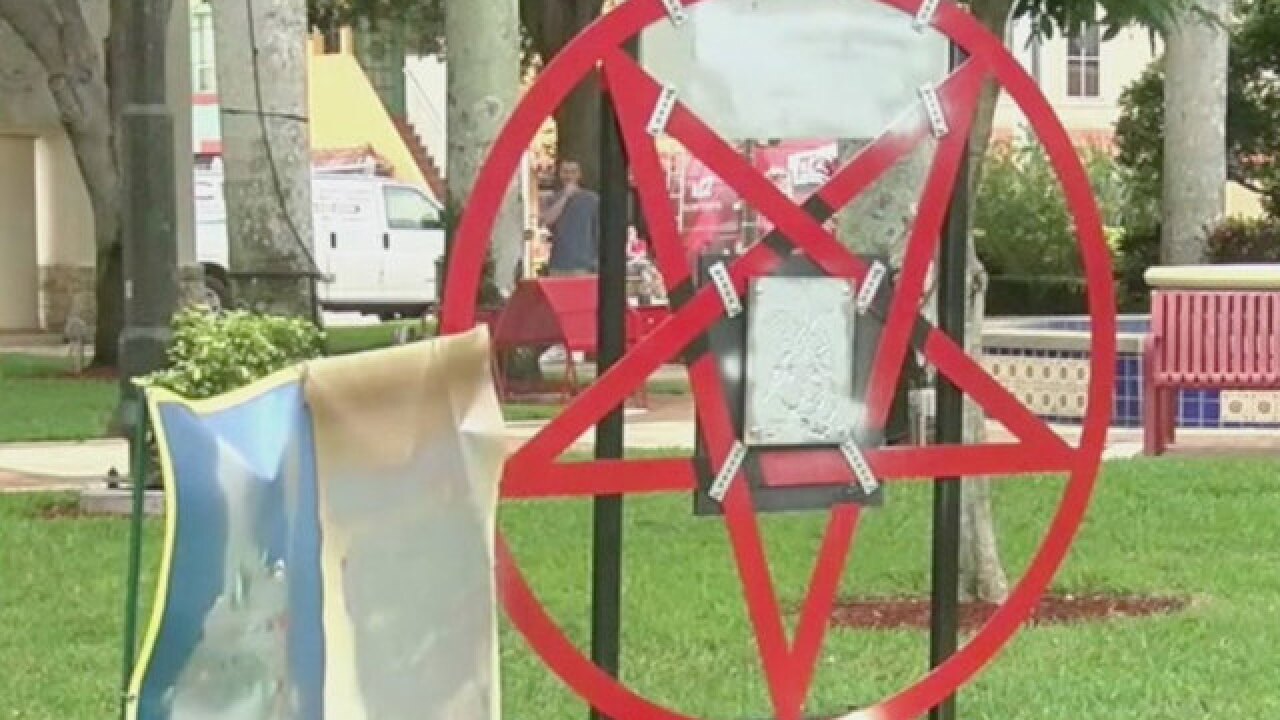 The man who installed a satanic pentagram in Boca Raton is a public school teacher, the Palm Beach County superintendent of schools has confirmed.

Parents of students in the Florida district said Preston Smith teaches language arts at Boca Raton Community Middle School. The president of the school’s parent teacher association said she doesn’t want Smith to continue teaching at the school, but added she can’t speak on behalf of all parents.

“A teacher we entrust our children with should not be putting a sign like this anywhere,” explained Kim Bremer.

Earlier this month, the city of Boca Raton gave Smith permission to install a Satanic display at Sanborn Square downtown. That is the same park where other religious organizations install a nativity scene and menorah during the holiday season.

Smith is a known activist for separating religion from government. He argued if the city allows one religious display on public property, it has to allow them all, even if they are offensive.

His display included the words “May the children hail Satan.” Bremer said that is not a message a middle school teacher should spread.

She plans to protest outside of the school Wednesday morning with other parents.

Solange Bush asked the school to move her 14-year-old son to a different Language Arts teacher, but scheduling didn’t allow it.

“I just don’t feel comfortable about it and I don’t agree with it,” Bush said.

Superintendent Dr. Robert Avossa said he understands those concerns. But he has no indication Smith has expressed his views while acting as a teacher. Much like the first amendment protects Smith’s freedom of expression on public grounds, it protects him as an individual to express what he believes outside of the classroom.

“We certainly can’t micro-manage what an individual does outside of the schoolhouse,” Avossa said. “I am aware of the situation. This isn’t the first time this individual has participated in an activity like that. What we do is answer any questions as they come up at the school.”

So, Smith will remain in the classroom.

Meanwhile, Boca Raton police filed a report Friday that someone had stolen a banner Smith set next to the pentagram. Someone previously spray painted the banner and pentagram. Smith replaced the targeted items and called the vandalism a hate crime.

The mayor of Boca Raton and the Interfaith Clergy Association have publicly denounced the pentagram.

Smith told NewsChannel 5 in a statement he does not "proselytize my own viewpoints in the classroom or disparage any child's personal faith."

He said he has no plans to step down as a Language Arts teacher at Boca Raton Community Middle School despite some parents calling on the superintendent to remove him.

"Students have an uncanny ability to be more tolerant, respectful, and educated about diversity than most adults. There is a mutual understanding not to discuss the display with me on campus," Smith wrote.

Some parents took particular offense to the message on the inverted pentagram, which called on all children to hail Satan. Smith countered that the nativity scene is just as offensive.

"May the Children Hail Satan" is an artistic expression of defiance toward the Sanborn Square nativity scene, which performs an annual reenactment of predatory indoctrination in a public park targeting young children before they have critical thinking skills.  Satan and God are clearly both fictional characters devoid of any verifiable peer-reviewed scientific evidence," Smith wrote.