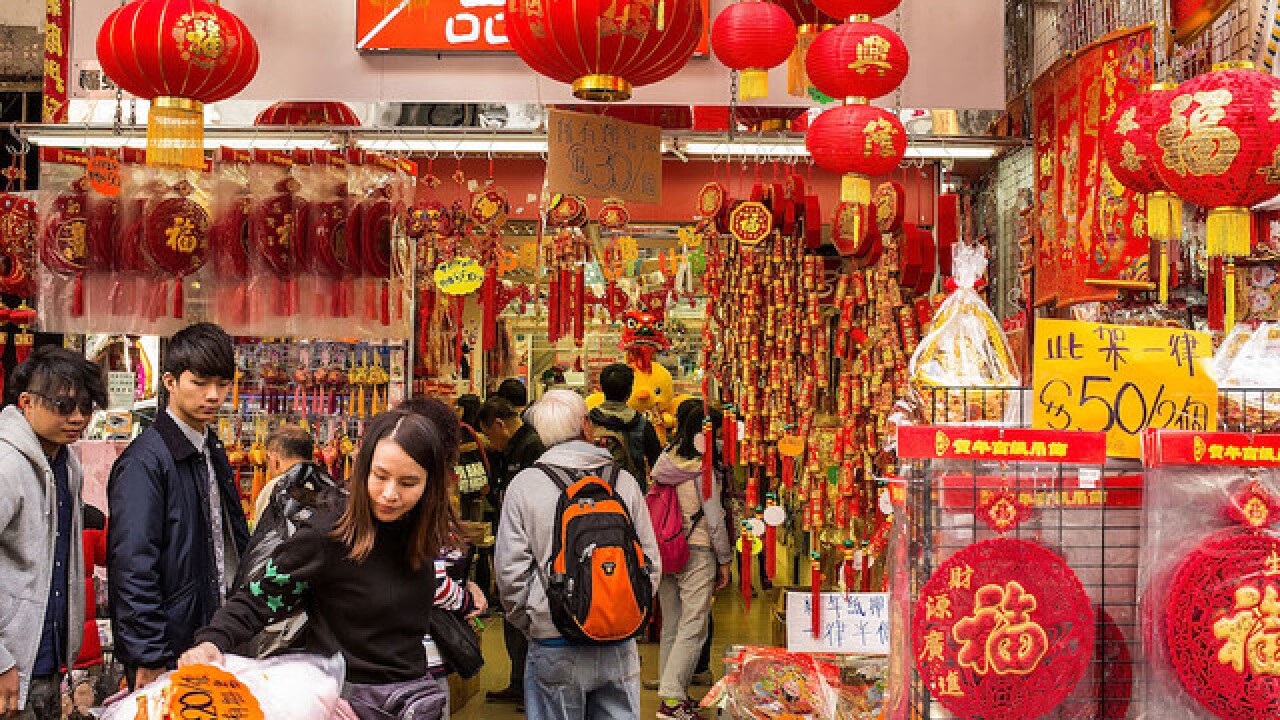 Copyright Getty Images
Lam Yik Fei
<p>HONG KONG - JANUARY 26: People get Chinese New Year decoration as for bringing in good blessings to the family on January 26, 2017 in Hong Kong. The Chinese Lunar New Year also known as the Spring Festival, which is based on the Lunisolar Chinese calendar, is celebrated from the first day of the first month of the lunar year and ends with Lantern Festival on the fifteenth day. (Photo by Lam Yik Fei/Getty Images)</p>

HONG KONG (CNN) -- It's time to say goodbye to the Monkey and hello to the year of the Rooster.

This year's Lunar New Year, which marks the beginning of the 15-day Spring Festival in China, begins on January 28.

It's the biggest holiday of the year for many Chinese -- and for some the only time they get enough leave from their jobs to travel home and see their loved ones.

But along with the reunions come a lot of traditions -- and superstitions -- aimed at making sure the year ahead is lucky and prosperous.

Many people already know that red is associated with luck and prosperity, hence all the fiery hues you see on Lunar New Year decorations and clothing.

Here are a few other key dos and don'ts that many Chinese follow before and after the Lunar New Year.

The more fireworks or firecrackers you set off the better.

Not only do you light up the night sky with a symphony of color, but the loud banging sounds are thought to scare off evil spirits.

In many parts of China, you'll hear a constant, nightly barrage of loud bangs during the first 15 days of the Lunar New Year celebration, which is known as the Spring Festival -- even though it happens in the middle of winter.

Some people are so enthused they'll even set them off during the day.

Eating dumplings around the holidays is a popular tradition in northern China and there are three reasons for it.

B) The Chinese word for them, "jiao zi," is similar to the ancient word for new replacing the old.

C) The shape of a Chinese-style dumpling resembles the pieces of gold that were used as money in ancient times. A plate full of dumplings looks like a big pile of gold, symbolizing wealth in the coming year.

Sweep, mop, scrub, dust, vacuum, steam -- do anything and everything to make sure your home is spick and span BEFORE the stroke of midnight on Lunar New Year eve, January 27. (See below for more on this.)

The aim here is to rid your home of any bad luck that's accumulated over the past year.

It's also advised to settle debts ahead of the New Year, credit card bills included.

The superstition is that if you start the year in the red, you'll likely end it that way too.

Wash or cut your hair

Leave your hair as it is on January 28, the first day of the New Year.

The Chinese character for hair (?) is the same first character in the word for prosper (??).

This means washing or cutting it off is seen as washing your fortune away and dramatically reduces chances of prosperity in the year ahead.

If you've had a big New Year's Eve party, make sure you clean up and throw out the trash BEFORE midnight.

Otherwise you're going to have to wait till the second day of the new lunar year.

Cleaning of any kind on the first day is strictly forbidden.

You cleaned your home to rid it of any bad luck before the New Year -- now you want to be sure not to wipe, sweep or wash away any of the good luck that arrived at the stroke of midnight.

Avid readers will want to stock up on their books and magazines before the Lunar New Year, because it's bad luck to buy them during the 15-day Spring Festival.

The Chinese word for "book" (sh?) sounds exactly the same as the word for "lose" -- so buying a book right after ringing in the New Year is considered an invitation for bad luck.

Also, avoid giving books as gifts to anyone, because it'd be like wishing bad luck upon them.