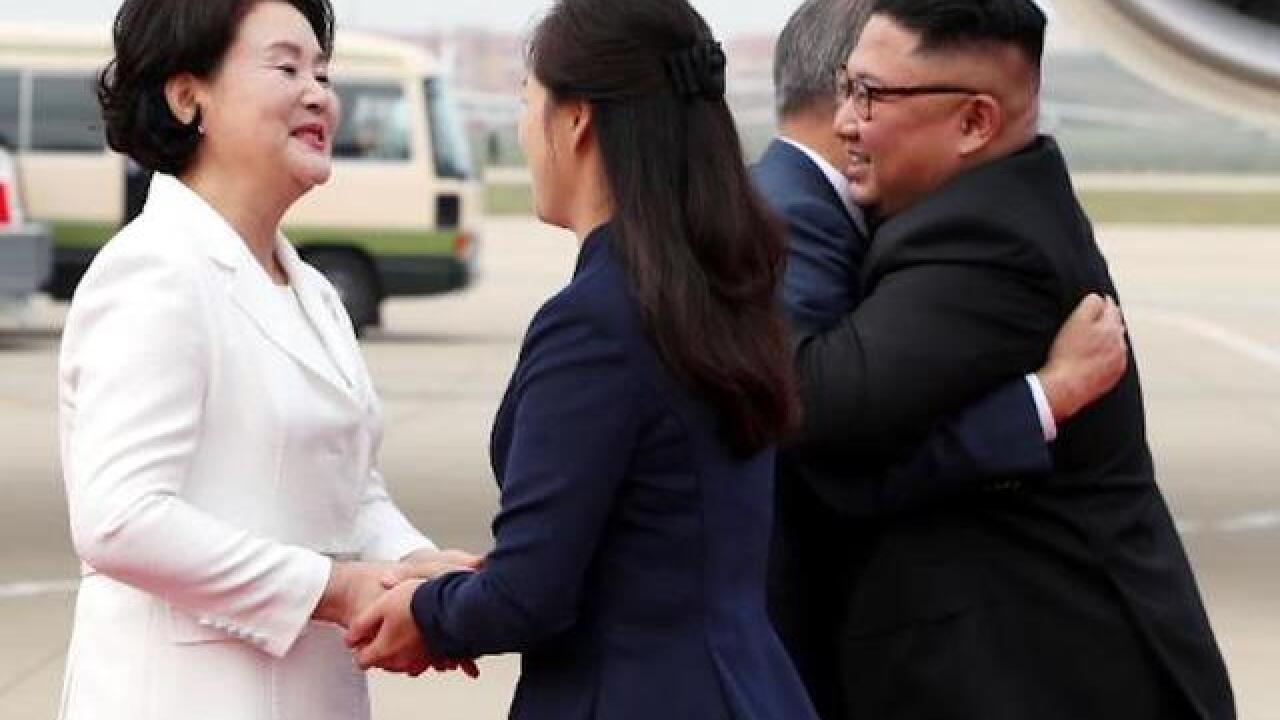 North Korean leader Kim Jong Un greeted South Korean President Moon Jae-in on his arrival in Pyongyang Tuesday for their third summit this year, as the two countries look to establish peace on the Korean Peninsula.

The two leaders smiled and hugged at the foot of Moon's plane at Sunan International Airport, amid crowds of cheering North Koreans waving flowers and national flags, including those symbolizing a unified Korean Peninsula.

Moon and Kim and their wives then shook hands with various officials, before reviewing a North Korean ceremonial guard. The highly choreographed scene, set to military music, lasted around 15 minutes.

It was the first time Kim had greeted visitors at the airport since the young North Korean leader took power in 2011, according to South Korean officials.

Later in the day, the two rode in an open-topped car through the streets of Pyongyang, waving to thousands of onlookers who had lined the streets.

The historic three-day-trip marks the first time since 2007 that a South Korean president has traveled North. The two leaders will discuss a host of likely issues, including economic cooperation, North Korea's nuclear weapons program and formally ending the Korean War.

"What I want to achieve is peace. Not a tentative change which could be volatile dependent on international situation, but irreversible, permanent and unwavering peace, regardless of what might happen on the global arena," Moon said on Twitter ahead of his departure.

Moon and Kim vowed to bring an end to the Korean War during their first summit meeting. Though fighting ended 65 years ago, the war has never been formally ended with a peace treaty.

While a formal peace regime officially ending the Korean War would need buy in from the US and China -- the other participants in the conflict -- experts agree that there is nothing to stop the two Koreas declaring an end to the war themselves, or signing a bilateral peace treaty.

Moon arrived in North Korea with an entourage that includes K-pop stars and nearly a dozen business leaders, including Jay Y. Lee, the head of Samsung.

Though Pyongyang will likely relish the opportunity to court South Korean investors, ongoing nuclear talks between North Korea and the United States are also expected to feature prominently on the agenda.

The third meeting comes as the diplomatic efforts to get North Korea to give up its nuclear weapons and ballistic missiles appear to have hit an impasse. It's been three months since US President Donald Trump met Kim in Singapore -- the first-ever summit between the sitting leaders of their two countries -- but there have been no visible steps made by North Korea to suggest it has stopped the development of its nuclear arsenal.

Trump's national security adviser, John Bolton, delivered a similar assessment last month when he said the Trump administration does not feel North Korea was living up to its end of the agreement reached between Trump and Kim in Singapore, a page-and-a-half document that critics assailed as too short on specifics.

The problem, analysts say, is that North Korea will likely never give up its nuclear weapons unless it has a peaceful and productive relationship with the United States.

Washington is likely only willing to fundamentally change its relationship with Pyongyang if Kim were to give up his nuclear weapons and the ballistic missiles he needs to deliver them.

"I am willing to talk candidly with Chairman Kim Jong Un to find a balance between the US' demands for denuclearization and North Korea's request for dropping hostile policies and enforcing measures to secure their safety," Moon said Monday.

"I believe that the denuclearization issue can be progressed at a rapid pace if the two leaders face each other again and talk."

Trump and Secretary of State Mike Pompeo have preached patience in recent weeks, with Pompeo telling reporters Friday that the US will continue to use a strategy that involves negotiation while also enforcing the stringent sanctions levied on Pyongyang by the United States and the United Nations.

"The United States is as committed as ever to continuing to enforce those UN Security Council resolutions," Pompeo said.

"We believe they are central to President Trump's efforts to convince Chairman Kim that full, final denuclearization of the Korean Peninsula is necessary."

Rolling out the red carpet

If history is any precedent, North Korea will continue to pull out all the stops for Moon and his entourage.

The previous two South Korean Presidents who visited North Korea, President Roh Moo-hyun in 2007 and President Kim Dae-jung in 2000, were both given a hero's welcome.

Kim, the first South Korean leader ever to travel North, won a Nobel Peace Prize for his efforts, but his legacy was tainted after it was revealed that South Korea secretly funneled nearly $200 million dollars to the the North Koreans through the Hyundai corporation just days before the talks.

Like Kim and Roh before him, Moon was also greeted on arrival in Pyongyang by scores of cheering civilians, many in colorful traditional dress. Moon's office said he will also stay at the same venue where Kim Jong Il, the late North Korean leader, hosted Kim Dae-jung and Roh, the Paekhwawon State Guesthouse.

But beyond the pomp and circumstances, it's unclear if this summit will end in any sort of formal agreement. Moon's office insists that its important for the two Korean leaders to continue meeting on a regular basis in order to work toward peace.

"We don't mean to add another declaration or another agreement," Yoon Young-chan, a spokesman for Moon, said Tuesday. "We're moving towards a new era."