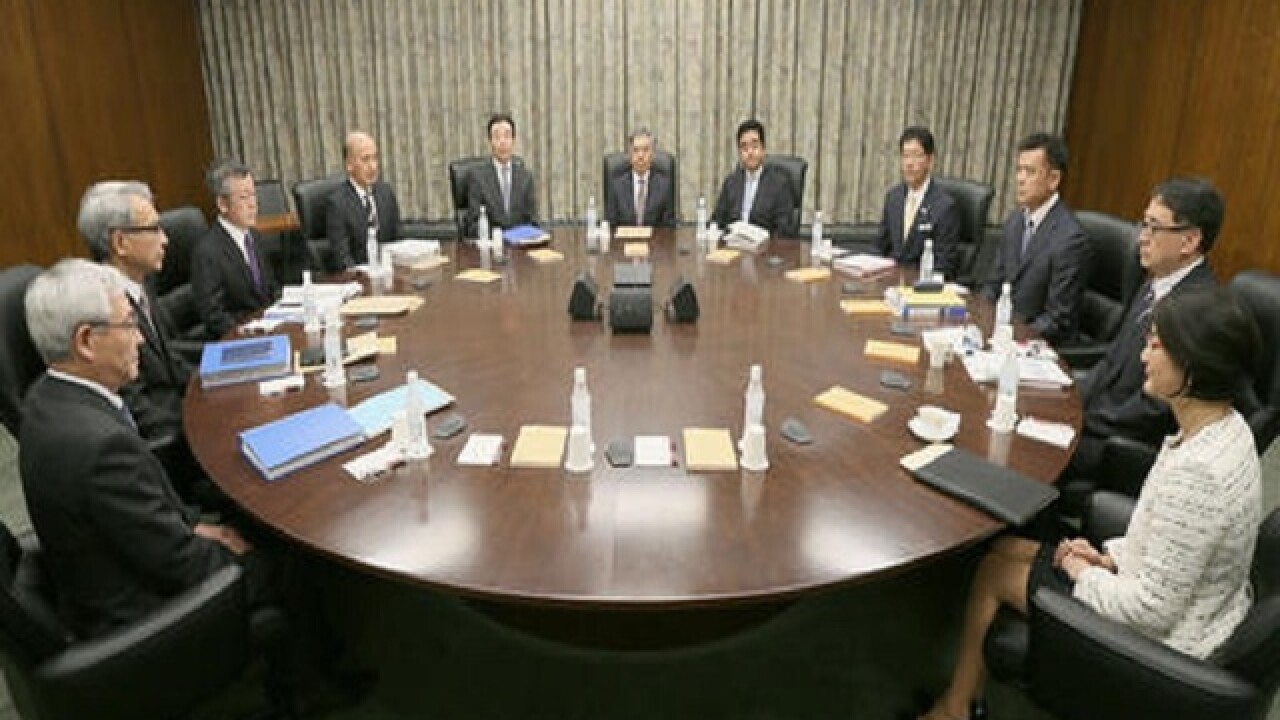 <p>Governor of the Bank of Japan Haruhiko Kuroda, center back, poses with other members of Policy Board of the BOJ before their meeting at its headquarters in Tokyo Friday, July 29, 2016. Japan's central bank has opted for a modest expansion of its lavish monetary stimulus to help perk up sluggish growth and combat deflation. The Bank of Japan ended a policy meeting on Friday by announcing it will expand purchases of assets from financial institutions to help inject more cash into the economy and pursue its 2 percent inflation target. (Kyodo News via AP)</p>

TOKYO (AP) — Japan's central bank opted Friday for a modest expansion of its lavish monetary stimulus to help perk up sluggish growth and combat deflation.
The Bank of Japan ended a policy meeting Friday by announcing it will expand purchases of assets from financial institutions to help inject more cash into the world's third-largest economy and pursue its 2 percent inflation target.
The central bank said it would almost double its annual purchases of exchange traded funds, to 6 trillion yen ($57 billion) from the current 3.3 trillion yen. One fifth of that will be earmarked for companies that meet benchmarks for investing in staffing and equipment, it said in a statement.
It also doubled the size of a U.S. dollar lending program to support Japanese companies' operations overseas, to $24 billion.
That followed an announcement by Prime Minister Shinzo Abe earlier this week of 28 trillion yen ($267 billion) in spending initiatives to help support the sagging economic recovery.
The recent vote by Britain to leave the European Union has added to the uncertainties clouding the global outlook at a time when Japan's recovery remains in question.
"There is considerable uncertainty over the outlook for prices against the background of uncertainties surrounding overseas economies and global financial markets," the central bank said.
The BOJ already is injecting about 80 trillion yen ($760 billion) a year into the economy through asset purchases, mainly of Japanese government bonds.
The central bank did not change the interest it charges on policy-rate balances it holds for commercial banks, which is now at a record low minus 0.1 percent.
Financial markets seemed underwhelmed by the central bank's modest action.
The Nikkei 225 stock index dropped 1.7 percent by midday Friday while the U.S. dollar weakened to 103.10 yen from 104.80 yen late Thursday.
Ahead of the central bank's decision, Japan reported further signs of weakness in its economy in June, with industrial output and consumer spending falling from the year before.
Core inflation excluding volatile food prices dropped 0.5 percent from 0.4 percent in May. The Bank of Japan and government have made scant progress toward a 2 percent inflation goal set more than three years ago, partly due to the prolonged slump in crude oil prices.
Household spending fell 2.2 percent from a year earlier, while industrial output slipped 1.9 percent on an annual basis.
Household incomes rose 0.3 percent in June, weak for a month when workers commonly receive bonuses.
Unemployment fell to 3.1 percent in June from 3.2 percent for the past several months. But tightness in the job market has not spilled into significant increases in wages that might help spur more consumer demand and encourage businesses to investment in the short of "virtuous cycle" Abe has been promising since he took office in late 2012.
Copyright 2016 The Associated Press. All rights reserved. This material may not be published, broadcast, rewritten or redistributed.