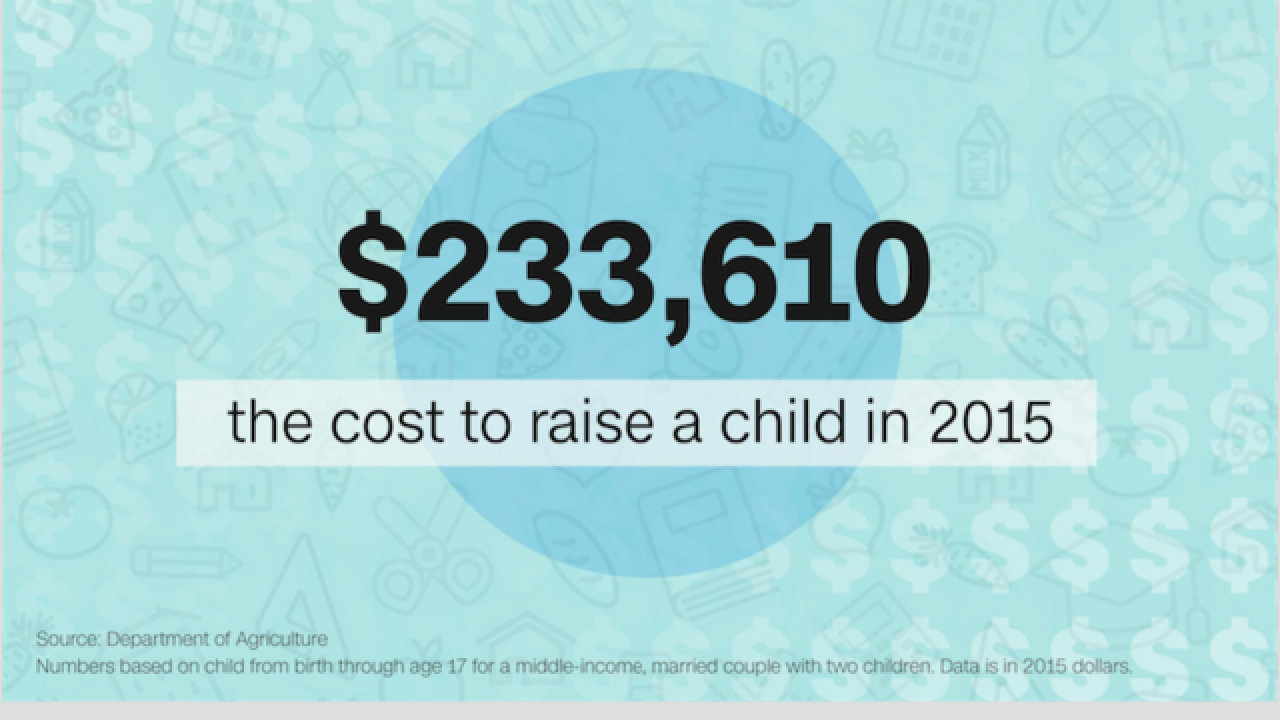 Shutterstock/CNNMONEY
<p>If you're thinking of starting a family, you might be in for some sticker shock: Raising a child could cost you nearly a quarter of a million dollars.</p>

NEW YORK (CNNMoney) -- If you're thinking of starting a family, you might be in for some sticker shock: Raising a child could cost you nearly a quarter of a million dollars.

A middle-income, married couple with two children is estimated to spend $233,610 to raise a child born in 2015, according to a report released by the Department of Agriculture Monday. And that number only covers costs from birth through age 17 -- so it doesn't include college expenses.

Housing was the biggest expense for middle-income families, taking up an average of 29% of the total cost of raising a child, driven mostly by the cost of an extra bedroom.

Another big expense is child care, which costs parents an average of $37,378 per child, according to the government.

Despite the endless cycle of diapers, children tend to be less expensive in their younger years. While child care and education expenses are higher for children under six, those expenses often dissipate as kids get older and enter school full time. Transportation, food, health care and clothing costs all rise as children age.

Transportation costs can also weigh heavily on a family's budget, but they dropped 7% from 2014 to 2015 thanks to lower gas prices.

Costs vary by family income level and location. Lower-income families are estimated to spend an average of $174,690, while high-income households will pay around $372,210 over the years.

By region, families in the urban Northeast face the highest child-rearing tab with an average of $253,770, followed by the urban West at $235,140. Those living in rural areas throughout the country pay the least, at an average of $193,020, according to the government.

Parents in the urban Northeast also spend the most on housing and child care and education.

Siblings can reduce some budgetary pressure. Married-couple households that had three or more children spent 24% less on average per child compared to those with two kids.

"There are significant economies of scale, with regards to children, sometimes referred to as the 'cheaper by the dozen effect,'" said Mark Lino, author of the report and economist at the Department of Agriculture, in a press release. "As families increase in size, children may share a bedroom, clothing and toys can be reused, and food can be purchased in larger, more economical packages."

Has the cost of raising a child impacted your budget and lifestyle? We want to hear from you. Tell us your story, and you might be featured in an upcoming story on CNNMoney.