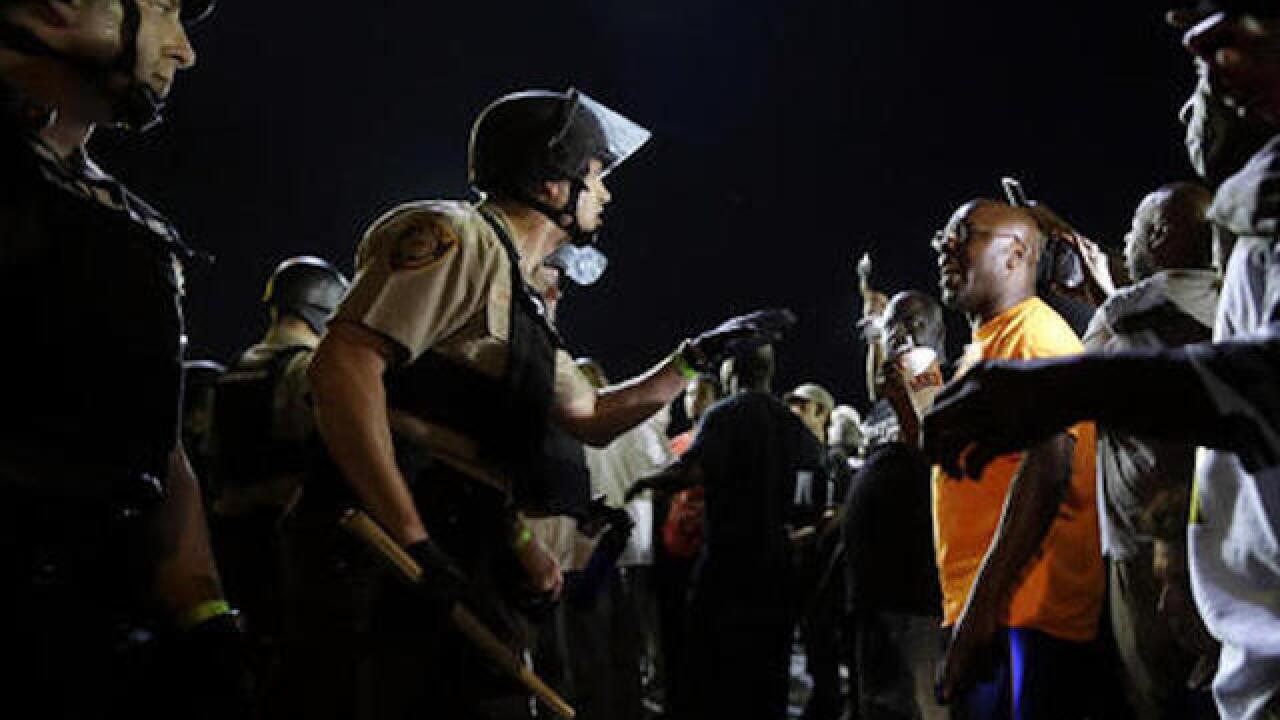 Copyright Associated Press
Jeff Roberson
<p>In this Aug. 10, 2015, file photo, officers and protesters face off along West Florissant Ave. in Ferguson, Mo., a year after the fatal police shooting of Michael Brown, a black 18-year-old who was unarmed. A federal judge has chosen a monitor team to oversee reforms of Ferguson's policing and court system. U.S. District Judge Catherine Perry announced Monday, July 25, 2016, that Squire Patton Boggs, a law firm based in Cleveland, was picked to make sure reforms are adequate in the St. Louis suburb. (AP Photo/Jeff Roberson File)</p>

Ahead of the second anniversary of the fatal police shooting of an unarmed black teenager in Ferguson, Missouri, that touched off a wave of protests nationwide, a coalition of more than 60 organizations affiliated with the Black Lives Matter movement has issued a list of demands calling for policing and criminal justice reforms.

The agenda, titled "A Vision for Black Lives: Policy Demands for Black Power, Freedom and Justice" was released Monday by the Movement for Black Lives. The platform also comes after both the Republican and Democratic conventions, during which Black Lives Matter activists were noticeably absent from protest lines.

"We seek radical transformation, not reactionary reform," Michaela Brown, a spokeswoman for Baltimore Bloc, one of the group's partner organizations, said in a statement. "As the 2016 election continues, this platform provides us with a way to intervene with an agenda that resists state and corporate power, an opportunity to implement policies that truly value the safety and humanity of Black lives, and an overall means to hold elected leaders accountable."

The agenda outlines six demands and offers 40 recommendations on how to address them. To address criminal justice reform, for example, movement organizers are calling for an end to the type of militarized police presence seen at protests in cities like Ferguson, and the retroactive decriminalization and immediate release of all people convicted of drug offenses, sex work related offense and youth offenses.

The group also is calling for the passage of a bill that would create a commission to study reparations for descendants of slaves.

This is the first time Black Lives Matter has articulated its demands and has faced pressure to do so.

The Black Lives Matter movement dates to 2012, but ignited two years later when 18-year-old Michael Brown was fatally shot by Ferguson police officer Darren Wilson, who is white, on August 9, 2014. The incident, followed by other killings of black men and boys by police in cities including Baltimore and Cleveland, sparked racial tensions and weeks of protests that evolved into a national conversation about disparities in policing.

Fueled largely by social media, the movement has grabbed the attention of elected officials, including President Barack Obama — who has invited activists to the White House to discuss their grievances and possible solutions. Their efforts also have forced the issues of criminal justice reform and policing disparities into the 2016 election cycle, and were credited, in part, with the ouster of district attorneys in Illinois and Ohio earlier this year.