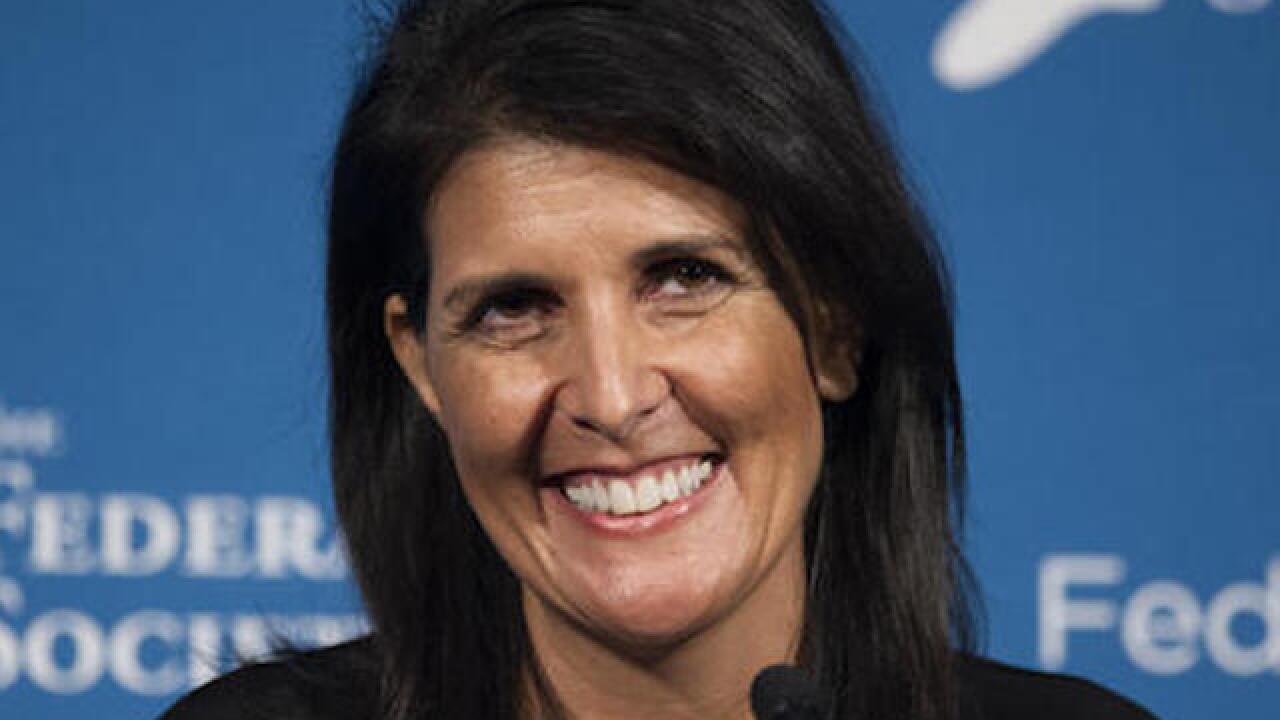 Copyright Associated Press
Cliff Owen
<p>In this Friday, Nov. 18, 2016 photo, South Carolina Gov. Nikki Haley smiles while speaking at the Federalist Society's National Lawyers Convention in Washington. President-elect Donald Trump has chosen Haley as U.S. ambassador to the United Nations, and he will treat the ambassadorship as a Cabinet-level position, according to two sources familiar with Trump's decision who requested anonymity to discuss the decision and its announcement.  (AP Photo/Cliff Owen)</p>

WASHINGTON (CNN) -- The Senate voted Tuesday to confirm Nikki Haley as ambassador to the United Nations, making her the fourth member of President Donald Trump's Cabinet to be approved even as Republicans and Democrats battle angrily over the pace of confirmations.

Haley, the governor of South Carolina and a rising GOP star, was approved with wide bipartisan support, 96-4.

Republicans are upset at what they complain is a deliberate effort by Democrats to slow walk approval of Trump's top government executives and argue the GOP was much more cooperative when President Barack Obama got seven Cabinet members confirmed on the day he was sworn in back in 2009.

Haley, Republicans say, is an example of a largely non-controversial nominee who should have been approved faster.

"Our Democratic friends need to get over the fact that the election is over and now we have the responsibility of governing -- hopefully, together. But instead so far they've just chosen to obstruct and foot-drag, and to me one of the most shameful and reckless parts of this is the way in which they delayed the confirmation of an important member of President Trump's National Security Cabinet," said Sen. John Cornyn of Texas, the second-ranking Republican leader.

But Democrats defended what they said was a necessary pace. They charged that Trump selected several people with complicated financial portfolios that needed to be cleared by a government ethics watchdog to ensure they would not have conflicts of interest while in office and others with alleged ethical lapses related to stock trade and unpaid nanny taxes.

"There are a bunch of nominees that have real problems," said Senate Minority Leader Chuck Schumer, a New York Democrat. "Isn't it the obligation of both Democrats and Republicans to vet these candidates thoroughly? They are going to have huge power over the lives of every American."

Two embattled nominees, Georgia Republican Rep. Tom Price and Republican South Carolina Rep. Mick Mulvaney faced contentious confirmation hearings Tuesday and four other nominees were voted out of committee. One was Haley who won approval of the Foreign Relations Committee on a voice vote, although two Democrats recorded "no" votes against her.

"The position of US ambassador to the United Nations requires a high level of expertise on international affairs, not someone who will be learning on the job," said Sen. Chris Coons, a Democrat from Delaware, explaining his vote against her.

Votes on two other nominees were abruptly canceled without explanation late Monday night.

Aides in both parties were tight-lipped for hours about why Energy Committee Chairman Lisa Murkowski of Alaska and ranking Democrat Maria Cantwell of Washington called off the committee votes for energy secretary nominee Rick Perry and interior secretary Ryan Zinke.

An aide to Murkowski finally issued a statement that there had been a "miscommunication" between the two senators and that votes would be rescheduled soon.

But floor votes on the nominees who cleared committee will have to wait until at least next week. That's because the Senate is leaving town tomorrow as Republicans and Democrats head to their legislative retreats in Pennsylvania and West Virginia, respectively.

GOP leaders said before they leave they will trigger procedural steps that will allow them to clear secretary of state nominee Rex Tillerson early next week and other Cabinet nominees soon after. While Democrats have successfully stalled some of these nominations, they don't have the votes to block them.