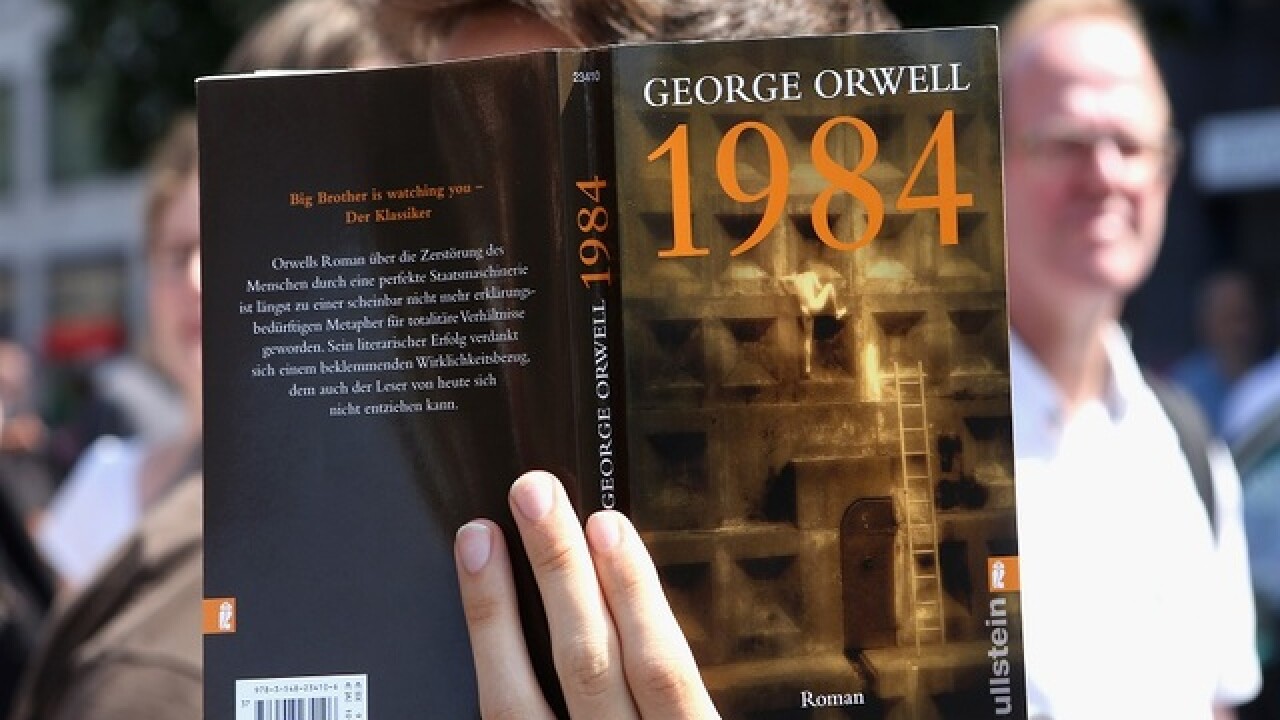 Copyright 2017 Scripps Media, Inc. All rights reserved. This material may not be published, broadcast, rewritten, or redistributed.
Adam Berry

NEW YORK (CNNMoney) -- The book publisher Penguin is printing more copies of George Orwell's dystopian classic "1984" in response to a sudden surge of demand.
On Tuesday evening and Wednesday morning the book was #1 on Amazon's computer-generated list of best-selling books. The list reflects hourly book sales.
The 68-year-old novel appeared on the list on Monday, hovered around the #6 spot for much of the day, rose to #2 by Tuesday afternoon and then hit #1.
Lower down on Amazon's best sellers list are two other classic novels with similar themes: "It Can't Happen Here," by Sinclair Lewis, and "Brave New World," by Aldous Huxley.
It is hard to say for sure how much of the interest is related to Donald Trump's inauguration and the rise of "alternative facts," a term coined by Trump senior advisor Kellyanne Conway on Sunday.
But some commentators called Conway's comment "Orwellian" and drew comparisons to the famous novel.
"1984" tells a harrowing story within a world of government surveillance, propaganda and "newspeak." In the book, the "Ministry of Truth" actually delivers lies.
The publishing house responsible for the book noticed the recent spike in sales.
"We put through a 75,000 copy reprint this week. That is a substantial reprint and larger than our typical reprint for '1984,'" a Penguin spokesman told CNNMoney Tuesday evening.
The spokesman explained that the start of the spring semester always leads to new sales of the book, since "1984" is a staple in classrooms. But the size of this reprint is unusual.
According to Nielsen BookScan, which measures most but not all book sales in the United States, "1984" sold 47,000 copies in print since Election Day in November. That is up from 36,000 copies over the same period the prior year.
BookScan's data does not reflect any of the new sales since Inauguration Day. And Penguin declined to provide any further data about the number of copies sold.
According to CNN, "1984" also saw a spike in sales in 2013 when leaks by Edward Snowden made National Security Agency surveillance a huge international news story.
On Tuesday Orwell's book traded places on the Amazon list with a much more recent release, "Hillbilly Elegy," a memoir by J.D. Vance.
The New York Times has recommended "Hillbilly Elegy" for readers who want to "understand Trump's win." It has been at or near the top of the best seller charts for months. Vance recently joined CNN as a contributor.
The-CNN-Wire
™ & © 2017 Cable News Network, Inc., a Time Warner Company. All rights reserved.
Copyright 2017 Scripps Media, Inc. All rights reserved. This material may not be published, broadcast, rewritten, or redistributed.