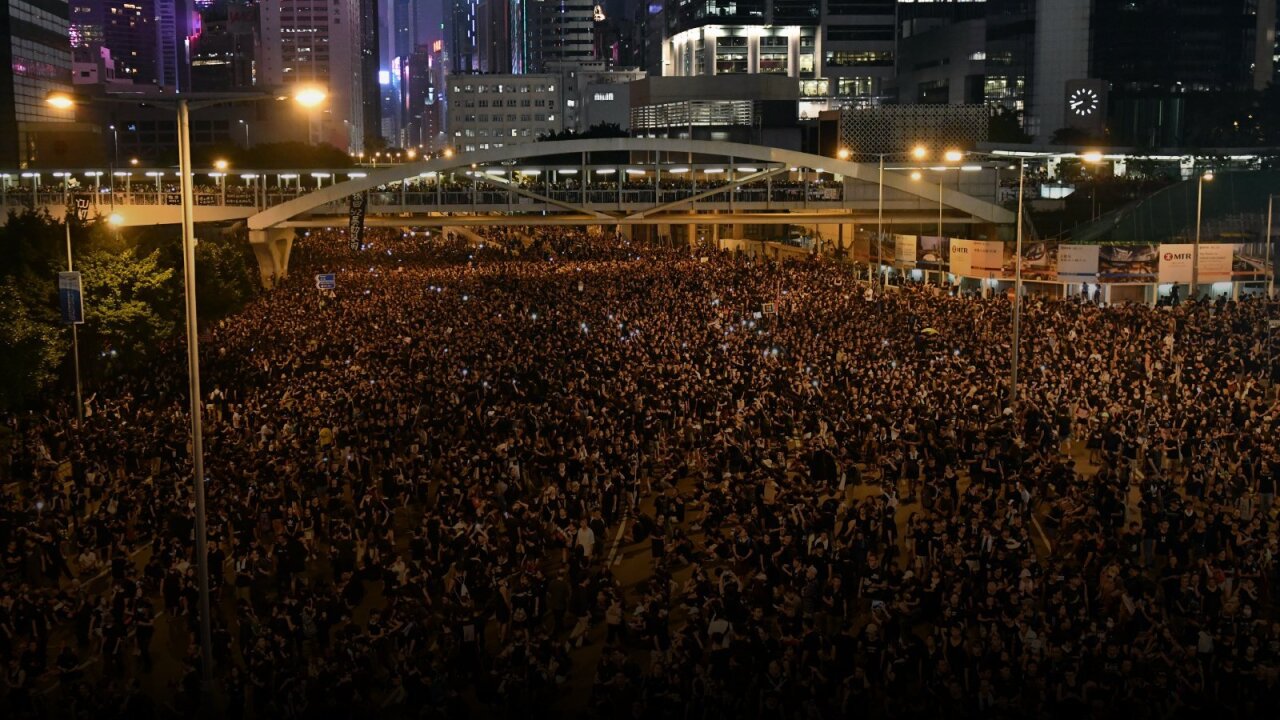 
All departing flights were canceled Monday afternoon as thousands of demonstrators descended upon Hong Kong International Airport, covering it with protest signs and graffiti. According to the airport's website, a handful of flights departed after midnight.

An airport spokesperson said flights would resume at 6 a.m. local time on Tuesday, although a number of incoming and outgoing flights are still listed as canceled on the airport website. According to CNN's count, there were still 130 outgoing flights and 132 incoming flights canceled from 7 a.m. through midnight Tuesday.

Around 30 protesters in the arrival hall said on Tuesday that they had stayed overnight, and that they hoped to paralyze the airport again if enough fellow protesters joined them.

Demonstrations initially kicked off at the airport on Friday, with a small number continuing protesting over the weekend. Tuesday would be the fifth consecutive day of protests there.

"We stayed here overnight because we want to show people it's safe in the airport," said 23-year-old Pang, who would not give his first name.

"We are expecting more people to join in in the afternoon and with enough people, we hope to paralyze the airport once again like we did yesterday."

Last year, Hong Kong's airport handled 74.7 million passengers -- an average of about 205,000 per day. But on Tuesday, the airport was brought to a standstill as protesters occupied parts of the airport.

Confused tourists were left unsure of what was happening as shops, restaurants and check-in counters closed. Trains and buses heading into the city were packed with people, and the one available information desk was helmed by frazzled looking staff.

Some travelers were pragmatic about the delays. Hayden Smyth, a tourist from Australia, said it was a "bit of a different welcome than I'm used to."

But others were frustrated by the cancellations. "We love Hong Kong but it does change our whole perspective," said Australian Kim Macaranas, whose flight was canceled Monday. "I understand the protests but this is not helping tourism."

"The Hong Kong airport is important for the logistic and transport industry," he said, emphasizing that about 200,000 tourists come to Hong Kong daily -- a key part of the city's economy.

"It is easy to lose, but it is really hard to build up the reputation."

Why Hong Kong is protesting

Hong Kong's protest movement kicked off in earnest in June, sparked by a bill that would allow extradition to China.

Since then, the protests have expanded into something bigger, with protesters now demanding greater democracy and an inquiry into alleged police brutality. The protest movement -- now entering its 10th week -- has seen protesters and police clash numerous times, with police firing multiple rounds of tear gas.

Beijing, meanwhile, has criticized the actions of the protesters. On Monday, a top Chinese official said the protests "had begun to show signs of terrorism."