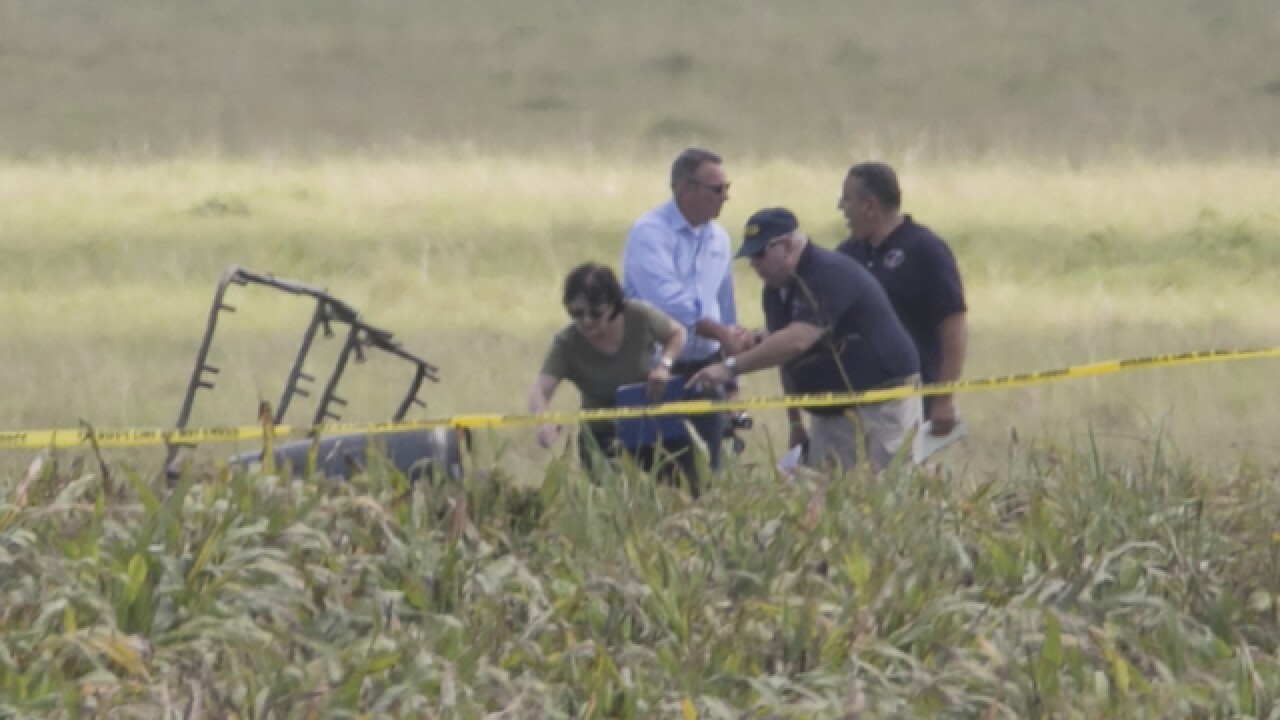 Ralph Barrera
<p>The partial frame of a hot air balloon is visible above a crop field as investigators comb the wreckage of a crash Saturday, July 30, 2016, in Central Texas near Lockhart, Texas. Authorities say the accident caused a "significant loss of life." (Ralph Barrera/Austin American-Statesman via AP)</p>

LOCKHART, Texas (AP) — At least 16 people died in the hot air balloon crash in Central Texas, the National Transportation Safety Board said Sunday, cautioning that investigators haven't officially determined the exact number of passengers and what caused the worst such disaster in U.S. history.

NTSB investigators will scrutinize the company that operated the balloon and the pilot, neither of which have been publicly identified. The balloon was operated by Heart of Texas Hot Air Balloon Rides, according to two officials familiar with the investigation who spoke to The Associated Press on condition of anonymity because they weren't authorized to speak publicly. The operation does not appear to be registered with the state of Texas.

Though authorities haven't publicly identified the pilot, Alan Lirette told the AP that it was Skip Nichols — his best friend, boss and roommate. Nichols, 49, identifies himself on his Facebook page as the chief pilot of Heart of Texas.

Lirette helped launch the balloon, which Nichols was piloting, Lirette said Sunday morning from their shared house in Kyle, Texas. Lirette also said there were 15 people on board — none of them children — plus Nichols. Lirette would not answer specific questions about the balloon's launch or crash into a pasture Saturday morning near Lockhart, Texas.

"That's the only thing I want to talk about, is that he's a great pilot," Lirette said of Nichols, who also owns Missouri-based Air Balloon Sports LLC. "There's going to be all kinds of reports out in the press and I want a positive image there too," he said

NTSB investigators will look at "three things — human, machine and environment" at the site, which is about 30 miles south of Austin, board member Robert Sumwalt said Sunday in Washington, D.C. They'll look at the aircraft's maintenance history and weather at the time of the crash, which is one of the worst ever in the world. In February 2013, 19 people died and two people were injured when a balloon caught fire over Luxor, Egypt, and plunged 1,000 feet to the ground.

Federal officials aren't sure how many people were riding in the balloon, will look into whether the operator filed a passenger manifest before taking off and that balloons do not usually file flight plans, Sumwalt said. Lirette said that several people on board seemed related, because "a lot of last names were the same," but he didn't provide specifics. Authorities have not released the names of those who were on board.

The NTSB is interested in any cellphone video of the balloon's flight, and investigators will look for devices in the wreckage that have recoverable video shot by passengers, as well as any video from witnesses.

"When balloons go out on these flights, they have a chase couple of cars to go pick up the riders after they've landed in a field somewhere. We think there may be some chase footage from those cars," Sumwalt said.

The crash happened in farmland, and cutting through it is a row of massive high-capacity electrical transmission lines. The site of the crash appears to be right below the overhead lines and aerial photos showed an area of charred pasture underneath, but authorities haven't provided further details about what happened.

Margaret Wylie lives about a quarter-mile from the crash site and told The Associated Press that she was letting her dog out Saturday morning when she heard a "pop, pop, pop."

"I looked around and it was like a fireball going up," she said, noting that the fireball was under large power lines and almost high enough to reach the bottom of them.

Heart of Texas' website said it offers rides in the San Antonio, Houston and Austin areas. The company's Facebook page features photos of a hot air balloon with a smiley face with sunglasses on it up in the air, people waving from a large basket on the ground and group selfies taken while up in the air.

Calls to Heart of Texas operations manager Sarah Nichols, 72, rang unanswered, and a woman in Missouri believed to be his sister did not return calls seeking comment.

Warning about potential high-fatality accidents, safety investigators recommended two years ago that the Federal Aviation Administration impose greater oversight on commercial hot air balloon operators, government documents show. The FAA rejected those recommendations, and the NTSB classified the FAA's response to the two balloon safety recommendations as "open-unacceptable," which means the safety board was not satisfied with the FAA's response.

FAA spokesman Lynn Lunsford said it's difficult to say whether the Texas crash will cause the agency to reconsider NTSB's recommendations "until we've had a chance to gather and examine the evidence in this particular case."