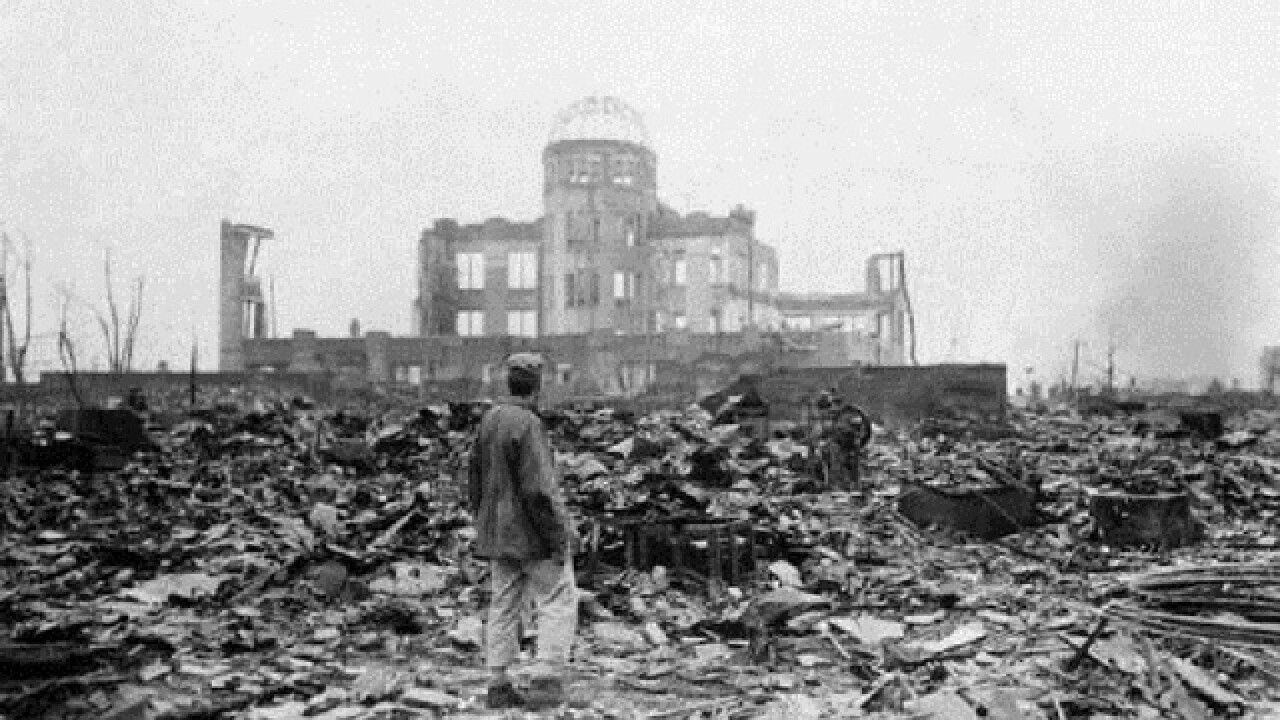 By: Associated Press
Posted at 11:24 PM, May 10, 2016
WASHINGTON (AP) — Eager to heal old wounds and galvanize new generations, President Barack Obama this month will become the first sitting American president to visit Hiroshima, where seven decades ago the U.S. dropped the devastating atomic bomb that ushered in the nuclear age.
By visiting the peace park near the epicenter of the 1945 attack, the president hopes to reinvigorate efforts worldwide to eliminate nuclear weapons. But in a sign of the extraordinary political sensitivities attached to the gesture, the White House is going out of its way to stress Obama will not come bearing an apology.
Deputy national security adviser Ben Rhodes said flatly: "He will not revisit the decision to use the atomic bomb at the end of World War II." Instead, Rhodes said in a statement, Obama will spotlight the toll of war and offer a "forward-looking vision" of a non-nuclear world.
Japanese Prime Minister Shinzo Abe, who will accompany Obama on the visit, said no apology is expected — or necessary.
"The prime minister of the world's only nation to have suffered atomic attacks, and the leader of the world's only nation to have used the atomic weapons at war will together pay respects for the victims," Abe told reporters. "I believe that would be a way to respond to the victims of the atomic bombings and the survivors who are still in pain."
The U.S. attack on Hiroshima on Aug. 6, 1945, killed 140,000 people. A second bomb, dropped on Nagasaki three days later, killed 70,000. The bombings scarred generations of Japanese, both physically and mentally, but many Americans believe they hastened the end of World War II and saved countless other lives. Japan announced it would surrender on Aug. 15.
As for Obama's visit, the Japanese people are ready for this moment, seven decades in the making.
In a NHK television poll this month, 70 percent of Japanese respondents said they wanted Obama to visit, compared to 2 percent against it.
Survivors, especially, have long been waiting. The number of survivors who are recognized as "hibakusha" and entitled to medical assistance from the Japanese government was more than 183,000 as of March. Their average age is now over 80.
"The day has finally come," said 91-year-old Sunao Tsuboi, a survivor of the bombing and head of a survivors group in the western Japanese city.
"We are not asking for an apology," Tsuboi told NHK. "All we want is to see him lay flowers at the peace park and lower his head in silence. This would be a first step toward abolishing nuclear weapons."
The president's visit, at the end of a previously announced trip to Japan and Vietnam, has been widely anticipated since Secretary of State John Kerry went to the Hiroshima memorial in April.
Hiroshima Mayor Kazumi Matsui praised Obama's plan as a "bold decision based on conscience and rationality" and said he hopes the president will listen to survivors' stories. Nagasaki Mayor Tomihisa Taue said the president would "send a powerful message, in his own words, toward achieving a world without nuclear weapons."
Obama's call for a nuclear-free world echoes the message delivered by former President Jimmy Carter when he visited Hiroshima in 1984 and pledged to work as a private citizen "to eliminate nuclear weapons from the face of the earth."
White House Press Secretary Josh Earnest said it was "entirely legitimate" for historians and the American public to debate whether President Harry Truman's decision to drop the bomb was the right thing to do.
"But that's not what President Obama will do when he visits Hiroshima," Earnest said. "What President Obama will do is make note of the fact that the relationship between the United States and Japan has emerged stronger than anybody could have imagined back in 1945."
For all of the symbolism associated with Obama's visit, anti-nuclear groups said a powerful presidential message was not enough: The president who delivered a stirring call for a nuclear-free world in a Prague address during the first year of his presidency needs to use his last year to take more specific steps, they said.
The president should "use the opportunity to map out concrete actions the United States and other countries can and will pursue to move closer to a world free of nuclear weapons," said Daryl Kimball, executive director of the non-partisan Arms Control Association.
Kevin Martin, president of Peace Action, a U.S.-based group, added that Obama "will look insincere if his words espouse ridding the world of nuclear weapons while at the same time his administration continues its plan to spend a trillion dollars over 30 years to upgrade nuclear weapons."
The Congressional Budget Office estimated in January 2015 that the administration's plans for nuclear forces would cost $348 billion over the next decade. Others have said it could approach $1 trillion over three decades.
Obama's visit comes as the nuclear debate has been percolating in the 2016 campaign to select his successor, with GOP presumptive nominee Donald Trump floating the idea of allowing South Korea and Japan to acquire nuclear weapons.
Associated Press 2016